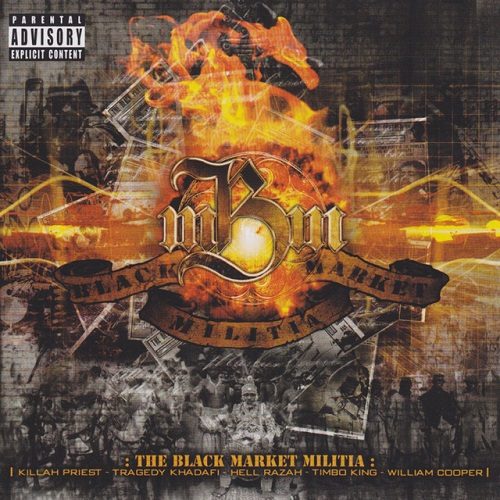 The supergroup is a fad in hip-hop that never even really got started. Aside from The Firm, which I won’t bother discussing, barely anyone actually got together to create an album. Plenty of rumors surfaced from time to time, but very few were fulfilled. One of the few rap supergroups to actually release material was The Four Horsemen, which consisted of Ras Kass, Canibus, Killah Priest, and Kurupt. They released a semi-official album “The Horsemen Project” on their own, which has subsequently gotten lost in rap history. For the most part, these types of projects are not fulfilled as they should, as the sum is unexpectedly less than its parts.

Killah Priest has decided to give the whole “supergroup” thing another try. This crew, consisting of himself, Tragedy Khadafi, TimboKing, and Hellrazah, is united for a cause, as opposed to the previous project, which was simply a relatively random collection of dope emcees. Those that miss the days of militant political rap, that old “Black Steel in the Hour of Chaos” type music, will dig this more than most. They have no qualms about being thugs, but they are all eloquent, informative, and resourceful regarding survival in the lives they live. Like-minded Dead Prez, as well as a member of the Last Poets, adds to the atmosphere of the album. The intro sets the tone, with a guest appearance from Oscar Brown Jr., who provides a fitting beginning to the record.

“Thug Nation” follows the intro with a layered and soulful production that is pure new-school Wu-Tang. The rappers act out their revolutionary fantasies, popping off guns at police and such. For such a self-proclaimed political group, they frequently blend political views with violence, and come off as far more threatening than most political musicians. In fact, much of the political talk is eschewed in favor of discussing everyday life, and most of the consciousness they demonstrate relates to ghetto survival, not the more visible politics that someone like Immortal Technique speaks about.

“Mayday!” is sonically similar to “Thug Nation,” with heavy drums and a sample that builds to a satisfying crescendo. The music isn’t even remotely original, and I have heard many beats that it greatly resembles, but it will nod your head, and it fits the rhymes as well. The verses are also in the same vein as the predecessor, though none of the emcees have distinguished themselves from the rest of the crew yet.

M-1 and stic.man stop by on “Audobon Ballroom,” though the results are slightly disappointing. Each rapper’s verse, as well as the chorus, is pretty inauspicious. The production is much less involving than the previous music on the record, essentially being too stripped-down and simplistic for the subject matter. Thankfully, “The Struggle” picks up the pace with a melodic loop and repetitive guitar plucks. Here, they venture out a bit in discussing black women and a few other varying topics, but the most prevalent topics remain the same. The most notable aspect of “The Struggle” is the catchy production, which is much more noticeably involving than anything else on the album.

A couple of the best cuts come at the end of the disc. “Dead Street Scrolls” thumps with heavy bass, and the beat moves in several directions at once. Each emcee comes through, but Tragedy Khadafi steals the show:

“Assata told her life story
Alex Haley showed me some Roots
My ancestors, those who came before me
Elijah told me how to eat to live, not to live to eat
From the pig intestine, the guts and the feet
King David gave me the book of psalms
Huey Newton taught me how to be a man
Stand up and bear arms”

Lyrically, the four-man group is interesting, though they continue to say the same things in different ways. The above verse is one of the most powerful, as it evokes the memory of the people that have influenced them. There’s plenty of talk of guns and life in the ghetto, and for the most part it is executed in a relatively fresh manner. On only thirteen tracks, including eleven full songs, there is not nearly enough time for each member to establish a consistent voice, so the result is a mish-mash of emcees that are all rapping about vaguely similar things. Mostly, it works simply because the group has a collection of surprisingly similar voices and the subject matter is uniform. It’s almost as if the entire record is done by one rapper. The difficulty I have with this is that one of the great modern lyricists, Killah Priest, does not develop his own flow over the course of “Black Market Militia.” He either doesn’t get enough time, or simply doesn’t try hard enough, to separate himself from the rest. Tragedy Khadafi is nice and all, but Killah Priest should be outshining him with ease.

Surprisingly, the production is the most consistent thing on “Black Market Militia,” not necessarily the best, but the steadiest. The music isn’t the catchiest in the world, but it provides a constant mood which is indicative of the themes of the record as a whole. Considering that there are four distinct styles and minds at work here (which in my mind is always the problem with this type of album), everything turned out surprisingly well. If anything, the artists struggle to create their own unique identity, which helps the cohesiveness from track to track, but removes the diversity expected from a project involving four emcees.

From start to finish, “Black Market Militia” is sardonically grimy and dark, which is likely exactly the intent of the makers. Those who would like political gangsta rap with more bullets than opinions and principles will be right at home here. There are a couple of great cuts, and most of the material is pulled off in inspired fashion. For true political hip-hop, look elsewhere. If you like some political musings mixed in with your gangsta rap, though, this record is for you.