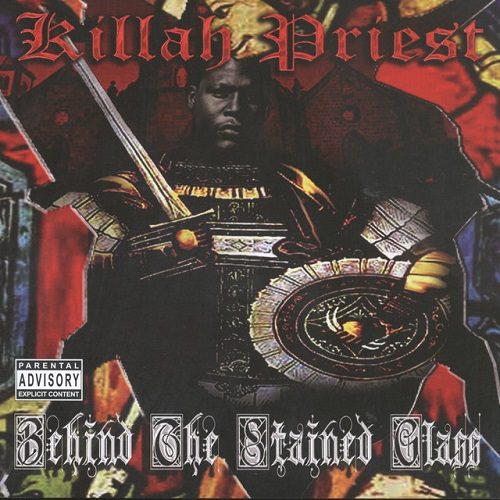 Killah Priest :: Behind the Stained Glass

Positive chemistry is the PREFERRED state anytime you combine two or more independent elements. What you are seeking is a sort of elevated whole from different pieces. Kind of like 1+1=3, if you understand what I am saying. The trick is trying to find which elements to blend, how much of each to blend, and for how long to blend them.

This can be applied to just about any situation where you are required to combine any two or more components. There is never ever just ONE right combination, but a combination that brings out the greatness of the parts involved are truly rare and worth keeping when you make them. It could be a social encounter (two people meeting at the right place, right time, and saying just the right things), cooking a dish (ask your local chef), or for the sake of this review, a hip-hop artist working with the right beat craftsman.

It is so VERY important that you find that one person (at a minimum) who you understand that brings out the best in you. An ill lyricist with the most magnificent flow just CANNOT overcome an awful beat. In vice versa, a gifted producer shackled to a less-than-average emcee might as well have issued an album full of instrumentals.

What does this have to do with this review? My point is that finding the person (or people) that you click with can take a lot of time and effort, but with so many people out chasing the same dream, and with the sheer ABUNDANCE of talent readily available to whoever is seeking it, there should NEVER be a reason why a reasonably well-known, seasoned and respected hip-hop artist should have to settle for anything less than FIRE production.

Killah Priest is a certified affiliate of that which is the Wu-Tang extended royal family. He also has a strong cult following, a large part which is composed of producers far and wide who would kill for the opportunity to work with him. This is why I am struggling to realize why he isn’t taking advantage of his hard-earned status in the hip-hop game and recruiting beatmakers who can maximize his gift of lyrical gab.

To say that Killah Priest is an excellent emcee is reiterate the obvious. The man was co-signed by none other than GZA himself when he gave him a solo spot on the CLASSIC “Liquid Swords” album with the song “B.I.B.L.E. (Basic Instructions Before Leaving Earth)”. Then he dropped the excellent “Heavy Mental” album to further cement the worthiness of his Wu affiliation.

On this album, he continues to deliver lyrics drenched in spiritual and conspiratorial references. He also delivers a few surprises like the first track “I Believe,” a track that delivers a short narrative of the events of his life concerning the lull in his hip-hop career and surrounds himself with a horn driven track punctuated with vocal samples speaking on the, “the end of time”.

On “A Crying Heart” and “Hood Nursery,” we hear story verses worthy of Tony Starks as KP describes apocalyptic descriptions of urban life. On “Profits of Man,” a member of the defunct Sunz of Man crew, 60 Second Assassin, shows up to speak philosophically on death and the legacy one should think of leaving when they pass away.

We have Killah Priest doing Killah Priest on this album. This is a good thing considering the ebbs and flows he has experienced during his hip-hop career.

What appears to be missing here is the track chemistry he had in days of old. He has made a choice to produce and he is an adequate producer. The problem is that he appears to be merely adequate and is not able to create a track for himself that would create a breakout moment for the album as a whole.

He lacks CHEMISTRY with his own production work and the album just does not climb the heights that it could if he would take the time to outsource the beatsmith work out to someone who would be capable of bringing out the best in him. I just do not feel that I am hearing the best that I can hear from Killah Priest.

I have two hopes:

One hope is that the Four Horsemen (Killah Priest, Ras Kass, Kurupt and Canibus) come into full fruition WITH the proper attention to detail, emcees and producers alike, that it deserves.

My second hope is that the next body of work that Killah Priest releases that he takes his time to comb the world for the beatmaker that can create the type of fuzzy math that positive chemistry is known to create: 1 + 1 = CLASSIC!