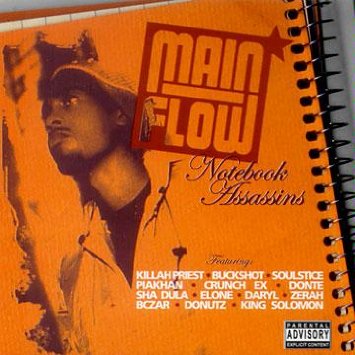 When it comes to making a name for yourself in the underground rap scene, Cincinatti’s own Main Flow has thus far been fairly successful. He started out in the underground rap ground Mood (also the group that gave birth to DJ Hi-Tek) and over the years successfully branched out into a solo career including last year’s “Hip Hopulation” album. Main Flow’s star seems to be on the rise, and with a new album on the upstart label Wannabattle Records he has the perfect opportunity to shine. Clearly Main Flow was not about to leave matters to chance though, as he corralled an all-star assembly of guests for “Notebook Assassins.” Killah Priest, Soulstice, Buckshot, King Solomon, and on production everyone from Hi-Tek to Brisk One providing beats. Flow clearly relishes the opportunity to bring this sound to the masses and as his song says “Perform Around States”:

Flow also has no problem getting conceptual on songs like the Brisk One produced “Super Star Slang”:

“Hey yo I’d rather be rhymin than trapped in court
In fact, make this a Michael Rappaport
When I met you you didn’t seem like the testy type
Fuck around on the set kid, Wesley Snipes
We in the mountains where it’s brisk
You know you couldn’t – everything is Cuba Gooding”

Unfortunately over the course of listening to this album one starts to notice a repetitive trend in Main Flow’s rap style. As a writer he’s par for the underground, on a good day slightly more than that, but in his phrasing and delivery he tends to severely abuse a singular rhyme pattern. In the pattern Flow goes about three or four words, groups another three or four that end in the same rhyme, and do this about two to three times per bar. Not only does it become annoying the more you hear it, it often results in the otherwise clearheaded Flow writing some shit that’s either totally nonsensical or so cryptic even Ghostface couldn’t decipher it. Take “Behind the Lines” for example:

“A border scene, don’t try to trap me in a submarine
Love the green, snub your team for the love between
Flex sounds, 200 down on some next pounds
And check rounds, ‘spect clowns and wreck towns
Prepare the intro, low pretend don’t sell the intro
Tell momento, limo to el central
We high drive, wreck my rains on I-5
Revive alive, survive dives with wise lies
Police recovery, helicopts the other see
A dozen flee, sellin big crops will cover me”

WHAT… THE… FUCK? Flow has been a rap pro from the get-go, and could clearly show more flavor in his flow than to keep on spitting the same sound yo. If this only happened once in a while you could say okay he’s trying a new style and flowing like Nu-Nile, but by “Gun Smoke” there’s no denial you’ve been hearing it for a while. Even though the song’s mercifully short, he still keeps abusing it like Allen I does the sport of basketball, and it’s not funny y’all:

“Takin a snooze, you niggaz like, makin the news
Fakin the dues, we lounge with Jamaicans and cruise
Tux pro, rhyme for the bucks though, deluxe flow
Good luck yo, just keep me knowin where the trucks go
Cash tecs, smash the Lex, stash the necks
Last in effects, passin the flex, flash the text
Dash to jex, gash the necks, trash index
Get hash and next flow lye like passenger sex
Knack for bright, packin this night, lackin the stripe
Be whackin your type, you niggaz ain’t trackin in hype
Back on this right, attackin the mic, smackin the wife
Black and the white, you niggaz smoke crack in the pipe”

Who’s smoking what? Unfortunately from this reviewer’s perspective “Notebook Assassins” seems bound and determined to undo all the good faith and indie credibility Flow had built up culminating in the well received “Hip Hopulation” LP. Although the list of producers is not lacking, some of the tracks clearly are. “Runaway” has a jazzy piano break, but doesn’t pack any punch. “Wannabattle Tactics” may be the most overwhelming track lyrically, but the Hi-Tek beat is so underproduced it wouldn’t jump off even with Allen Iversons on it. It’s telling that somebody didn’t master the album very well when the much better “Epionage” that immediately follows is twice as loud without even touching your volume dial. Where Flow’s previous work had hidden his flaws and showcased his strengths, “Notebook Assassins” seems tailor-made to do the exact opposite. While one can’t doubt he still has the future potential to shine again, he needs an album that’s much better put together than this to do so, and most of all he’s got to use the rhyme trio phrasing sparingly at best. As an occasional technique it creates emphasis, but ad nauseum repetition ultimately stifles his creativity.