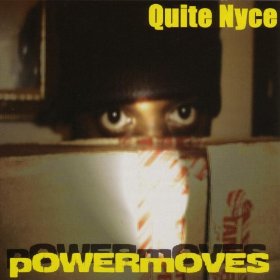 I wish everyone could make it, I really do. There are so many deserving artists that will never get the shine they strive for. This is simply because the rap industry, especially now the underground scene, is so cluttered with emcees and DJs who have serious talent. Whether itâ€™s due to their passionate pursuit of musical creation, or they just have a cool-sounding voice and some nice beats, there are plenty of people that I wish would receive the recognition that they havenâ€™t yet attained.

Put Quite Nyce down on that list right next to your favorite local cat, right now. Aside from the simple fact that he makes some dope hip-hop music, Nyce frequently hits the streets after two shows in one night to promote with his man SEEk. If that ainâ€™t love, and if you canâ€™t dig that from the start, then I donâ€™t know what to tell you. Fortunately, his music reflects the time he has put into making it. No amount of effort can overcome a lack of God-given skills, and Quite Nyce has been blessed with talent as well.

â€œPowermovesâ€ is his first solo venture, released on independent Abstrak Recordings. Quite Nyce never tries too hard, he just has a nice flow and a serious knack for picking beats. Most of the producers are no-names, but they hook him up with some great upbeat production that is clearly the result of long hours exploring the crates. â€œWhoâ€™s Thisâ€ starts off with a wicked bassline provided by Tunedbeats. Ms. Jana Sadler sings on the hook, and itâ€™s that rare type of singing that is clearly not geared toward radio play. Her voice rings through the speakers, saying â€œtrying to find a way to surviveâ€ in a fashion that is perfectly fitting the rough-edged underground sound of the track. Until the chorus arrives, the song is merely functional, but her addition carries it to another level.

Throughout the record, the music follows a strict formula that is deceptively simple. All of the various producers provide straightforward tracks that consist mostly of a hard beat with a loop or two thrown over it. The hooks, usually performed in a similar style by Quite Nyce, are functional and nothing else. His rhymes are never jaw-dropping, just consistently superior, and he seldom touches on topics that are not frequent emcee fodder. A few guests fill out the tracklisting nicely, which adds to the replay value. None of these elements make a good rap record by themselves, however. Each piece factors into the realization of dope hip-hop. Without some subtly funky beats, Quite Nyce wouldnâ€™t be quite as nice. Without his unassuming flow and occasional lyrical revelations, the production wouldnâ€™t sound quite as smooth. The hooks, with an occasional scratched vocal sample or harmonious singing where his voice should be, wouldnâ€™t function on their own either. When everything is thrown together, though, the result is more effective than expected.

There are a few cuts that stand above the others, though most of the record is uniformly solid. â€œ4Gottenâ€ boasts a soulful sample courtesy of producer Rawbird, and Quite Nyce speaks his mind eloquently. The scratched vocal snippets on the hook provide just the right lift, taking from Lilâ€™ Dap and others to bridge the verses. â€œPeel (You Donâ€™t Know Me)â€ has a more complex sound, thanks to Cadenceâ€™s board work, and Breez Evahflowin joins Nyce. Lines like â€œthey say Iâ€™m a potheadâ€¦damn straight!â€ break the serious tone occasionally, matching Cadenceâ€™s slightly playful beat. Ms. Jana Sadler stops by again to lace â€œD.V.â€ along with SEEk, Lyrical, and Tribeca, bringing a more somber tone and grave strings supplied by Tony Tank. This is quite a unique posse cut, which focuses on questioning the merits of â€œrealnessâ€ as it is commonly perceived.

Analyzing the albumâ€™s quality on a song-by-song basis is pointless, because there are very few standouts, and none of the tracks are even remotely wack. â€œPowermovesâ€ is just good hip-hop, from start to finish. Solid rhymes are backed by good beats, and all of the guests impress, especially his crony SEEk. There is enough variety in the production to keep your attention, and whether or not Nyce succeeds, he is giving his best. Luckily, his best is better than many othersâ€™ bests, so there is no reason that he should stop what heâ€™s doing. â€œPowermovesâ€ is classy, smooth hip-hop from the â€œIntroâ€ right â€œUntil the End.â€ Quite nice, thank you.