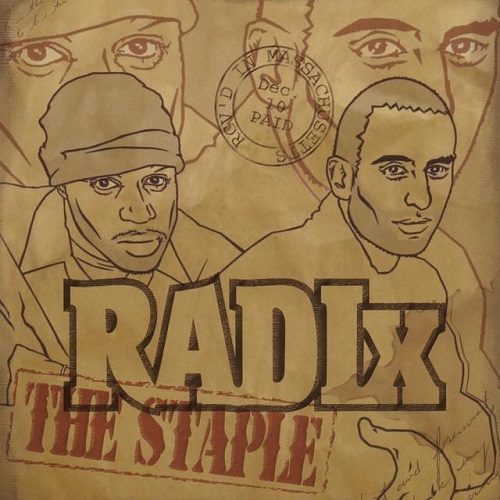 Don’t you just hate those days? Most of the time, one of ’em will show up at your doorstep at the end of autumn. The skies are covered in a thick layer of dull, grey clouds all day. There’s not a gust of wind to be felt, and on occasion a chilling dribble falls down, slowly drenching everything in sight. Days like these are best enjoyed on the couch with the drapes closed. Listening to RADIx’ debut album “The Staple” made me think back of one of those mindnumbing days. Maybe they should have released this record in autumn, not in spring.

Calling the Boston natives’ first long player bad would be doing injustice to them. Quite Nyce and Seek have a certain tag team quality to them, the production is laidback, almost soulful, and they have managed to concoct a distinctive sound throughout the record. It’s just that they did not succeed in making an album that has the ability to raise eyebrows. RADIx makes use of the musical elements that are required to bring forth a successful independent record, but they are not sure how to combine these elements. The best example of this problem is the title song “R.A.D.I.x.” The strings, in combination with a single elegant guitar chord, have a beautiful ring to them, but because the drum beat is so average, the track fails to leave a lasting impression.

The topics RADIx would like to share with their audience do not possess longlasting qualities either. Getting a record deal (“Dotted Line”), their love for the music (“Hip-Hop”) and struggle within the family (“Pain”), it’s all been done to death by thousands of other MC’s. When you listen to the chorus of “Hip-Hop” it will give you a eerie dÃ©jÃ  vu of the Dead Prez hit single “Hip-Hop.” But maybe that’s just me.

Perhaps the biggest problem with these two MC’s is that they have a fixed rhyme scheme that they will stick by even when a runaway truck is heading their way at full speed. Again, that doesn’t mean they are unskilled at what they do. It’s just that they do not possess a certain diction or tone of voice that sets them apart from the rest of the bunch. This is painfully apparent on the tracks where they are backed up by some of Boston’s finest MC’s. On “AkroRADIx,” Akrobatik not only gets half of the track named after him, but also manages to outshine the other two MC’s as soon he gets a hold of the mic.

Akrobatik is not the only underground star that dedicated some of his time to come to the studio. Quite Nyce and Seek got assistence on the production tip from former X-Men member Mista Sinista and veteran DJ JS-1, and also High & Mighty’s Mr. Eon and the hard-working Insight showed up to do their thing on the mic. Unfortunately, the songs that have guest spots on them are also the best songs on “The Staple.” On the previously mentioned “AkroRADIx,” Mista Sinista provides for a bell-infested head nodder that could have been a single on Akrobatik’s next album. DJ JS-1 comes through as usual with an oldschool boombap anthem on “Dj/Emcee.” Insight provides “From the Ground Up” with bars and walls when he drops some lines and delivers one of his recognizable beats to the RADIx’ doorstep.

When the mixtape “Prelude to The Staple” was released last year, it showcased a successful debut from a talented duo hailing from one of hip-hop’s most promising headquarters. Now that it’s here, it’s best compared to watching the promising trailer of an action flick, only to find out in the movie theater that the trailer scenes are actually the best ones in the movie. My advice: stay at home, close those drapes and wait for the sun to come out.