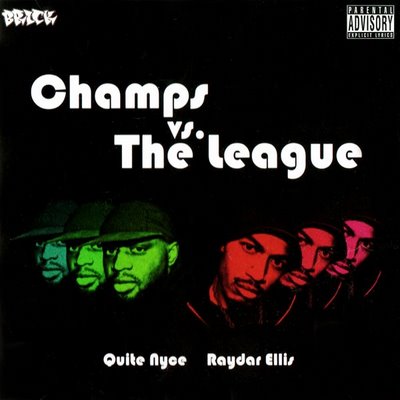 Quite Nyce & Raydar Ellis :: Champs Vs. the League

There is a shirt on Brick Records website that you can buy that says “Hip Hop Sucks Because of You!” I mention that because that angry and self-righteous sentiment is evident in “Champs Vs. the League”, by producer Quite Nyce and MC Raydar Ellis. As their press release says, “‘Champs Vs. the League’ is a project full of positivity, pride in family and community, self respect, reflection and hard work. It is truly an intelligent breath of fresh air in the current stagnant, un-innovative genre that is hip hop.” In other words, they think the music you’ve been listening to is wack, and they are here to call you out and show you what real hip hop sounds like.

Their credentials are solid. Both artists have been part of Boston’s underground hip hop scene for years, Quite Nyce with RADIx and Raydar with Short Bus Alumni and Project Move. Nyce has his own label, Abstrak Recordings, and Raydar Ellis has played with Mos Def and Guru and recorded with Esoteric and Michelle Williams. Plus, he’s a graduate of and professor at Berklee College of Music, so he knows his way around a studio. This isn’t some 15-year-old with laptop and a Myspace account.

Raydar’s musical training shows. The beats on the album are smooth, polished, and expertly arranged. “Clap” melds what sounds like the intro to “Superfly” with uptempo handclaps, producing a bouncing groove for Quite Nyce to spit over, rapping “This is what we do when we do what we can/so c’mon and clap your hands.” “Lalalalala” has mellow funky jazz beat that bubbles along at a slow simmer. Like a lot of the music on the album, “Lalalalala” is subtle, managing to get your head bobbing without hitting you over the head. The mellow, understated vibe of the record can get sleepy at times, like on “If I Never,” featuring Akil from Jurassic 5, or “Miss September.” Those slower tracks are contrasted by some uptempo songs, but on the whole this album is more reflective than banging.

Raydar and Nyce have passionate deliveries, and their rhymes focus on the problems in the world. When they are doing it right, they can be as invigorating as Mos Def or Talib Kweli, speaking truth to power and making the listener think. “Build Up” is an inspiring song about building up a strong foundation for the community; “Broken Pieces” sees the MCs reaching out to struggling friends, declaring “every time you slip/I’m always there to pick up the broken pieces.” On “The Spirit,” one of the stronger tracks on the album, the MC’s spit at the top of their game over a funky break, and the song ends with a quote from the classic film “Network” about being “mad as hell and not gonna take it anymore!” Raydar and Nyce are not just playing lip service to their ideals; their sincerity comes through clearly in their music, which is a definite strength.

The downside to this sincerity is that they can feel preachy at times. Maybe that’s an unfair criticism of artists who are at least trying to stray from the normal sex and violence of hip hop, but there were points on the album where I felt like I was being lectured at. “Holla Bout A Dolla,” for example, takes a scolding tone criticizing consumerism and capitalism in African-American communities. Their points about “being sick of seeing check cashers and liquor stores next to churches” is well-taken, but the message would have been better-received if the listener didn’t feel like the naughty kid getting called out by his dad/teacher/preacher.

Their self-righteousness is balanced by solid beats and rhymes, and it’s hard to begrudge any group that can produce a classic hip hop joint like “Buck Short,” which could have come straight out of late-nineties Rawkus. Fans of underground hip hop shouldn’t sleep on “Champs Vs. the League;” Quite Nyce and Raydar Ellis are definitely not minor league.