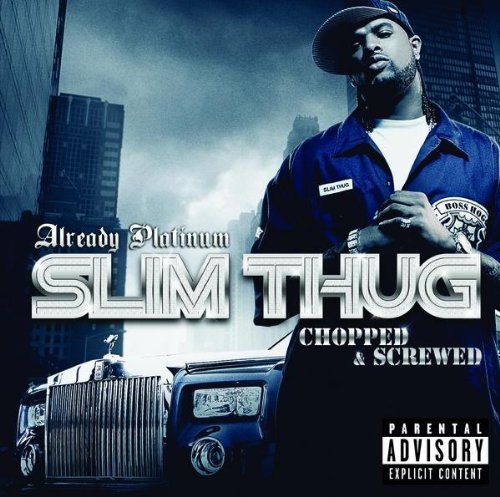 Chances are you’ve already heard of Texas kingpin Slim Thug by now. He’s got one of the industry’s hottest producers’ seal of approval in Pharrell, he has three songs in heavy rotation on radio and mixtapes, and one of those tracks has a bangin’ remix with none other than the Jigga man, Jay-z. Though a few years ago Slim Thug’s celebrity status was confined to his home state of Texas, today he seems on the verge of superstardom. With his nationwide debut album set to drop this May and his first single set to be released on video soon, Slim Thug’s career couldn’t be going better. Recently RapReviews.com had the opportunity to talk to Slim. Though the self-proclaimed boss may seem intimidating on video, his laid back Texas’ drawl and relaxed attitude shined brightly as we discussed his jump to the major leagues, his upcoming album, beef and who he thinks is next to blow in the industry.

Pedro Hernandez (PH): How’d you hook up with The Neptunes?

Slim Thug (ST): Shit, they was in Houston, out here on tour or whatever, promoting they lil’ N.E.R.D. CD. We were at the same restaurant as Pharrell and it was actually this radio dude who wanted to introduce us, this guy named Sean Pecker said “Let me introduce you.” So we went over and people were coming up asking for his (Pharrell’s) autograph and then they would ask for mine and Pharrell was like “Who the hell is this dude?” (Laughter). Shit, and then we just kept running into each other, in Houston, in Puerto Rico, just kept seeing each other. I also did this song with Fam ‘Lay, they heard that and liked it so whenever I signed to Interscope/ Geffen they asked Pharrell who they wanted to fuck with and it was me and Snoop, that’s all he took.

PH: Many people don’t know that you’ve been a major player in Texas for a while, does your contract with Interscope/ Geffen still allow you to fo your own thing independently?

“Interscope still lets me do my thing, that’s why I signed with them, I’m still putting out independent shit…”

ST: Fa’ Sho (Laughter), Interscope still lets me do my thing, that’s why I signed with them, I’m still putting out independent shit, screwed and chopped CDs, all of that.

PH: So is the new album going to come with a Screwed and Chopped version or is it going to be sold separately?

PH: (laughter) I don’t blame you man, what’s going on with the Boss Hogg Outlawz and the Boyz in Blue, are you working on getting them on a major label too?

“I got one dude signed, Killa Kyleon, I didn’t wanna give everyone up.”

ST: Yeah, I ain’t got everybody signed, I got one dude signed, Killa Kyleon, I didn’t wanna give everyone up. For me to ask what I want for them, I probably wouldn’t get it, not right now. I didn’t want to sell the whole team at once, ya’ know, right now they wouldn’t give me what I ask so it’s still independent right now. Still gonna put out something independent with them and then when we get hot, negotiate with them and get what I ask for ’em then. That’s what’s up with them, another independent album coming soon with them.

PH: Back to the album, do you have a release date and is it still going to be called “Already Platinum?”

PH: What’s the first single, do you have one yet?

PH: Outside of Pharrell, Bun-B, and T.I. who else did you work with on this album?

ST: Producers, Jazze Pha, Cool and Dre and the guy who produced “Three Kings” and then Snoop, Ludacris, Bun-B, Scarface, all of them on the album.

PH: I know you released at least three songs that have caught on, “Like A Boss,” “Three Kings,” and “I Ain’t Heard of That,” are they all going to be on the final album?

PH: I know you had that bootleg out for a while now, how many tracks did you lay down for the album?

ST: Maaan, we put down a lot of songs, first the bootleg were like the songs Pharrell didn’t produce, I had already laid those down. Then me and Pharrell, for like 2 weeks, maybe one, we worked together for like a week and put down like 20 tracks, those were just the ones Pharrell produced. After that we hooked up on different occasions and did a few more tracks. I fucked with other cats too, Timberland, Lil Jon, and Scott Storch, but dem didn’t make it to the album, just shit I did trying to put it together.

PH: I know you and Lil Flip are like the first cats to really blow big time from the SUC and Swishahouse repectively, do you think this is just the beginning of a trend?

ST: As far as bringing people out from my click? And getting em signed, man Mike Jones, Paul Wall, Chamillionaire all got signed, they all got deals, Killa Kyleon out my click. Out of Flip’s camp, man I dunno, I don’t even know, I think Lil’ Keke got a deal, I think he signed.

PH: I heard you mention Mike Jones and Chamillionaire, what do you think of their beef?

“Beef? I dunno I fuck with both of dem, both cool by me, man it’s just some lil’ bullshit…”

ST: Beef? I dunno I fuck with both of dem, both cool by me, man it’s just some lil’ bullshit going on, I don’t even think they tripping over it, ya know? As far as I know they both doing they own thing, it ain’t a big deal for ’em.

ST: Like me, I’m just doing me, I’m on my grind trying to get my paper, I never get caught up in that shit. Niggas, (laughter) only way I beef is if someone comes at me first ya know? Then I respond, otherwise I’m just like “let me get my paper,” that’s them. To me, maan that’s female shit to me really, beefin’, it ain’t something I do.

PH: Alright man, well I guess we gotta wind this up soon, so just a few more, what do you listen to when you’re not recording?

ST: What I’m bumping, when I’m in my ride or whatever, the new 50, “The Massacre,” that Game shit, T.I. Shit, still man, T.I. and this mixtape, umm this mixtape this dude from Atlanta, Young Geezy.

ST: Yeah, I fuck with that Geezy shit, I think his shit is hot.

PH: Alright, who do you think is gonna blow up next? Aside from you of course…

ST: I think Young Geezy, I fuck with him, yeah Geezy though his shit is real street, so I dunno if he’s just going to sellout on his thing or whatever, Mike Jones got a hell of a fanbase man, allover, Chamill(ionaire), Paul Wall, a whole bunch of dem cats I mentioned before coming out my camp man, they got some hot shit, all dem cats man that got signed, there’s so many…

PH: Alright man thanks a lot for your time, any more info, anything you want to tell the fans before we finish?

“Already Platinum, in May go support it, I know a lot of y’all already got the bootleg…”

ST: Yeah maan, Album dropping, “Already Platinum,” in May go support it, I know a lot of y’all already got the bootleg, y’all been bumping the bootleg, but it ain’t the same thing, it’s different, different tracks, so go support the album.