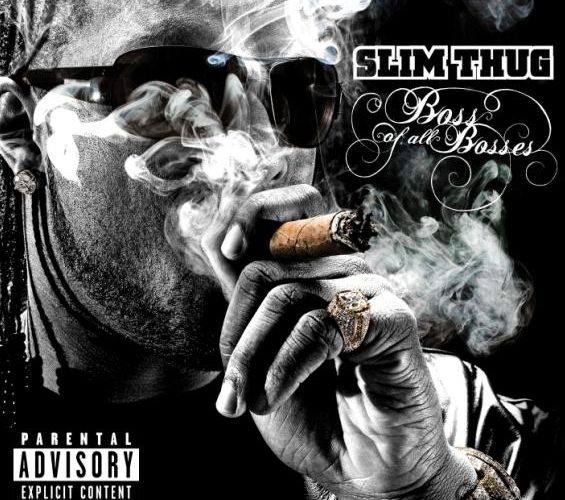 Slim Thug :: Boss of All Bosses

Time plays funny games with people. Four years ago I had the pleasure of interviewing an optimistic Slim Thug before the release of his debut album “Already Platinum.” At the time, Thug was looking forward to his first official album after years of dropping street albums in Texas. He put over his crew as well, mentioning his hope that Killa Kyleon would go major after he did. In retrospect, the most interesting thing Slim Thug mentioned was his admiration for an up and coming rapper named Young Jeezy. At the time, Jeezy was making noise in the underground with his “Trap or Die” mixtape and Thug mentioned him as one of the young cats he thought could make a big impact in the industry. Fast forward and suddenly the tables have turned. The up and coming independent rapper mentioned in the article is now one of the most popular rappers in the game. The optimistic rapper signed to a major label is now back on the independent grind. The pessimist could look at the negatives and declare Thug a failure, but the optimist would see the fact that Thug is in a much better place. While his Boss Hogg Outlawz never made a major label splash, they’ve been putting out hit singles and hit albums on the independent level. Slim Thug’s sophomore album delivers the sound and feel his debut should have had. That is not to say “Already Platinum” didn’t jam, but “Boss of All Bosses” sounds like the triumphant introduction to Thug’s unique brand of Texas rap rather than Thug trying to conform to the current trends.

“Boss of All Bosses” works so well due to the production. Slim Thug managed to put together a cohesive sound drawing the best from various producers. Dr. Dre drops an absolute southern banger on “I’m Back” and reunites with Devin The Dude for another certified classic. It doesn’t hurt that Dre took his inspiration and the sample from Crooked Lettaz’s “Get Crunk.” Mannie Fresh lets us know he’s still alive and still capable of making hits as he handles the production and the hook for the bounce inspired “Show Me Love.” Mr. Lee continues to show and prove that his production is on a major level holding down the bulk of the album and providing a strong back bone of Texas funk to hold Slim down. The only questionable producer one might find fault with is the ultra glossy shine provided by Jim Jonsin on “I Run” and “Smile,” but given the reception of the lead single and the smoothness of “Smile” it’s hard to blame Slim Thug for reaching out to the currently hot hit maker.

Lyrically, Slim Thug does what he does best, which is drop his thick southern drawl and rep for Houston. For most emcees, the act would wear thin after a few songs, but Slim Thug commands attention and holds down the album well. He weaves between different topics for an overall balanced album. “I’m Back” balances a little trash talking with some self reflection and works quite well:

“They say the truth will hit, so fuck it
I’ma gon’ keep it one hundred for the public
I dropped “Already Platinum,” but it only sold gold
And niggas looking at me like I sold my soul
Cuz I’m rapping with P and not Mr. Lee
But when you on your grind sometimes you can’t see
Before Mike, Cham or Paul was signed
I was at Interscope trying to find my mind
“Still Tippin'” wasn’t popping, “3 Kings” just dropped
And I’m an underground artist trying to get on top
So I listened to my label, planned to break acts
And learned a whole lot of game from that
Just stay true my nigga and do you
And fuck what another trying to tell you do”

I won’t say that type of introspection is new to Thug as anyone familiar with his catalog outside of “Already Platinum” knows there is a reason he was the first new generation Houston rapper signed to a label. The rest of the album offers enough variety to satisfy any fan. “I Run” is a glossy hustler’s anthem that twists a 1980s pop song into something that sounds quite hard. The guests are also wonderfully used on this CD. Pimp C and Bun B add their gumbo to the anthem that is “Leanin’.” Z-Ro slathers “Associates” with paranoia in a way only he can. Scarface and J-Dawg complement Thug nicely on “Hard.” Damn near the entire city of Houston joins Thug on “Welcome 2 Houston,” a fitting ending to what is arguably Slim Thug’s return to rap prominence, in his hometown and beyond.

“Boss of All Bosses” shows us why Slim Thug was one of the first Texas rappers to score a major deal. It also shows us why Pharrell, a man known for making big impacts on the mainstream level, put all his eggs in Slim’s basket. “Already Platinum” was a good CD, but it featured a rapper that wasn’t in his element. As dope as “I Ain’t Heard Of That” sounded, Slim Thug was never the one to make slinky party anthems. Slim’s element has always been delivering Texas tales over southern fried beats. His booming baritone always commands attention, but paired with the proper production he’s one of the most engaging emcees in the game. With his latest CD he reps for the Nawfside of Houston better than anyone besides Chamillionaire. Hopefully this is just a sign of things to come from the original boss.