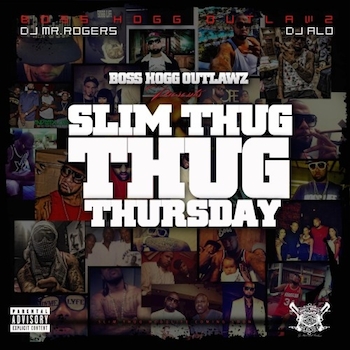 A “Boss Life” review is in the works, so if you Stayve Thomas fans are impatient, this “Thug Thursday” review is just meant to tide you over in the meantime. Officially the last time we checked in on Slim was on “Tha Thug Show” back in 2010, which was also his last major label album before “Boss Life.” That hasn’t stopped him from releasing mixtapes prolifically though, and with the amount that come out these days, you have to pick and choose.

“Thug Thursday” is one of the better you can choose though. If you don’t already know the Thugga, he has a uniquely identifiable deep vocal tone and raspy vocal drawl, one which sets him apart even from fellow Texans in general and Houston rappers in particular. When you hear Slim Thug, you’re hearing the South, and the South sounds good. Even when he just does a cameo verse on a song, he has a dominating presence, to the point his raps become the most memorable and imitable – a quality that served him well on the “Still Tippin'” Mike Jones single that gained him national recognition. This also lends itself well to Thug freestyling over the beats of other famous rap songs – it gives him a presence like the songs are actually his instead of simply being recycled beats. Songs like “Swimming Pool Flow” wind up giving you the Kool-Aid smile as a result. If you imagined how Thugga would sound over the T-Minus track, he delivers:

“I got a swimming pool full of (drank) them pints of the (drank)
That purple (drank) we po’ up (drank)
I smoke and (drank) cup full of (drank)
I’m leanin (drank) I’m leanin… haaa!
Tell her faint, tried to stop but I cain’t (hold up)
Them cups keep callin and it’s costin me a bank
We mud sippers every day, we po’ up a paint
Leanin hard on the ‘vard, doin what you cain’t
Ain’t another nigga fresher, Louis’ out the dressers
I’m foreign with the compressor molest a beat, like I’m Chester
Nawfside flow wrecker, twelve years and goin (goin)
Green still growin, chain and rang still glowin”

Of course it’s fun to hear Slim Thug rap over good songs, but I also feel he and his cohorts bring enhancement to rap songs I previously considered mediocre. I got tired of “No Lie” when 2 Chainz and Drake did it, but Thugga, Le$ and Propain breathe new life into it. “Geez In the Trap” does the same for Nicki Minaj. “I Don’t Like” was a decent song (thanks mostly to Pusha T and Big Sean) but again it’s fresher here thanks to Thug and Young Von. Rick Ross’ “Amsterdam” was arguably better than any of these, but even a Maybach Music track benefits from Thug and his former Boss Hogg Outlawz affiliate Killa Kyleon flowing to a Cardiak beat. Sayeth Thug:

“I keep my kush lit like it’s legal, smoke pounds with my people
Tryin to get to heaven but I’m still doin evil
Just to see them bands on the grands in the safe
There’s a smile of the year on my face
I still want mo’; I’m a Hogg so I’m greedy
But I’d rather be greedy and live large than be broke with the needy”

Indeed. “Thug Thursday” is a bit contradictory to his greed though given he’s giving it away for free on DatPiff, but it would be hard to sell it without paying for all the beats, and anything that keeps your name in the public could always have long term benefits. Thug recognizes that and his mixtapes are a way of “paying it forward” and staying busy and recognized even when he doesn’t have new retail albums available. There’s plenty to enjoy here, but I’m partial to the “Amen” flow and the “Molly G-Mix” among others already mentioned. I can’t give any production credit for the jacking to Thug or to his sponsors DJ Alo and Mr. Rogers, but this is still a fun mixtape.