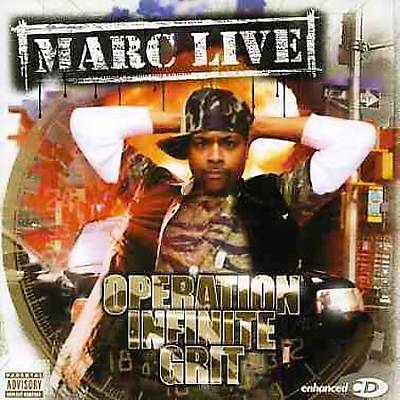 Is France stealing our rappers? Such a seemingly paranoid and ridiculous question actually has some validity behind. Reading Steve “Flash” Juon’s review of Kool Keith’s “Dr. Octagon II” I noticed Keith’s only somewhat official site was based out of France. Odd as it may sound, I wasn’t all too surprised that the same country that embraced many of our more progressive thinking Jazz artists would provide sanctuary for Hip-Hop’s Sun-Ra. Fast forward a week and Matt Jost reveals that Kool Keith affiliate Jacky Jasper’s latest effort is also released out of France on a French label. I initially dismissed it as a shady label possibly trying to get a quick buck, but then I realized that Keith’s own cousin, Marc Live, is releasing an album on the same Junkadelic Music record label. Doing more research it turns out Keith, Jacky, and Marc made the jump overseas a few years ago starting with their KHM album. This particular album is more of a mixtape as it features Marc Live’s best songs mixed by French DJ Junkaz Lou.

The songs included range from Marc’s solo efforts to all his group ventures including cuts from SMG, KHM, The Analog Brothers, Raw Breed, and The Clayborne Family. With such a vast range of projects included it is a difficult task to describe Marc Live to those not familiar with him or Kool Keith. Taking up the persona of an old school pimp as Mark Moog of the Analog brothers on “More Freaks”, Live spits:

“Sexed out psycho sections with the head work
Prissy blondes get they shit work
Sex offenders who remember masturbation cold in the winter
Street corner pervert, get ya swallow off they shoe missles in they mouth
Till they coughin, nobody’s smellin who’s fuckin them Nicco sweets
Silk sheets Moog mentality, put the dick in your bitch violently
Late night playa missions strip club stealth position
Hotel suites be dark, used condoms in the bathroom park
I’mma freak ya mama don’t know what happened after midnight
Soundly gonna blow right, mentally in a back door, Hollywood flip you
Now you’re a whore, headward blooded out perverted still comin out
Alley ways, back stairways bitches tied up, sized up, police follow me
Analog lead ya girl bikini collections dangerous erections
Find me in the triple X fuckin section
1, 2 I’m in the strip club with a condom on my dick”

As a member of The Clayborne Family, Live comes back to earth a bit as he spits:

“Yo, yo, you talkin’ crazy, oh you can’t bounce South
Stop speakin’ yo you’re not eatin’
Streets ain’t checkin’, chicks ain’t dancin’
Clubs ain’t tippin’
Your fam – kick ’em outta the kitchen (Oh!)
No breeze or chicken, stop, drop, my peoples is lickin’
Murkin’ and hurtin’, yo we workin’ hard (workin’ hard)
Block 50, long scar, gold heart, hustle long, get gone
Yo my block tells me – kid you’re wrong
Nobody gets money, it’s funny looks from millions of crooks
Captain Hook, don’t try me
I’ve been underneath the pavement, I made men
Before Benzino and them
It’s all good though… we gonna do it again
We tell two friends
We grip a chick, it’s not a pay scale
You can hit the mall or sell tail”

Much like his cousin Kool Keith, Live spends the majority of his time moving from one persona to another or sending a big “Fuck You” to the industry or anyone he dislikes when he’s talking as Marc Live. While at times this approach can be hit or miss, much like Kool Keith, Live is overall entertaining and a refreshing change from the average rapper.

Musically, Live also shares his cousin’s main handicap, as at times the music is fresh but other times it simply doesn’t cut it. With no production credits given it’s difficult to pinpoint who the culprits are when the production fails, but tracks like “Shit Expands,” “Do Your Damn Thang,” and “Need It Like That” sound too simple and amateur to be found on a release by an experienced artist. Aside from straight misses, the rest of the album does a good job of keeping the listener entertained. The 5 Raw Breed tracks included sound appropriately old school and are a welcome addition. The mock-dirty south synths of “You Gonna Get It” work well for the track. The SMG tracks sound good for the most part, especially the pounding beat on “Compton/Brooklyn.” With over 35 tracks included on this two disk set, Junkaz Lou did a good job of choosing more hits than misses. Mix-wise, Junkaz Lou does little to justify the prominence of his name on this release as his mixing skills are limited to the occasional scratch followed by the stereotypical bomb/gunshot sound used in between songs.

The second disk features 5 songs from Marc Live that I assume are from his future releases on Junkadelic. The disk is also enhanced and includes a music video, though I couldn’t find a way to play said video nor did the enhanced portion of the CD auto-load on my computer.

Overall “Operation Infinite Grit” is a solid compilation of Marc Live’s work. It seems to have included every side-project and group Live has participated in and is a good representation what Live is all about. For those new to this brand of hip-hop, it’s a good place to start as you not only get a comprehensive collection of Live’s music but also get appearances from Kool Keith and Jacky Jasper.