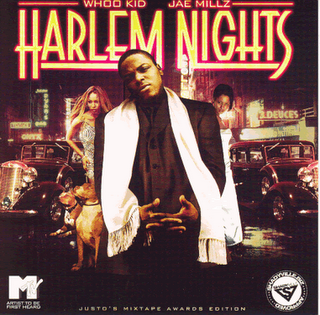 Crucify me if you want, but up to this point this reviewer remains largely unimpressed by the prodigious Harlemite they call Jae Millz. Acclaimed by a host of mixtape mavens as the future of East Coast rap (a rather lofty claim, no?) and the heir apparent to the throne vacated by Biggie Smalls and Sean Carter, to say Jae Millz has been garnering buzz would be a severe understatement, considering the clamorous support he receives from virtually every self-respecting mixtape enthusiast in the northern hemisphere. This, then, is the newest addition to the string of mixtapes bearing this man’s name, anchored and hosted by the mixtape pharaoh, G-Unit’s own Whoo Kid.

Colour me a jaded bastard, but I don’t really see the point of this mixtape, or indeed the “freestyle” phenomenon that currently saturates Jamaican store shelves all over the East Coast. Armed with a seemingly inexhaustible array of clever punchlines, Millz peddles a reasonably fine brand of wit-driven battle rap that will likely satiate any (inexplicable) yearning you have for redundant hardcore braggadocio, but ultimately proves tiresome and tenuous.

Jae Millz’ primary fault doesn’t lie in his ability- he displays a sharply-honed panache for deftly articulated one-liners and delivers each with an assured aplomb. Rather, he lacks the introspective depth of a Joe Budden, the irrepressible personality of a Cam’ron, the deadpan genius of a Chamillionaire, the consummately murderous drollness of a Fabolous, even the comic novelty of a Juelz Santana. Instead, compared to many of his more distinguished contemporaries, Millz seems far too predictable and straightforward. Shockingly, even a laconic verse by a faded Prodigy manages to outdo a complacent Jae Millz on “Respect My Gangsta”.

I can’t really unearth any enduring merit in this disc. It bears all the hallmarks of today’s east coast mixtape rap- the unnecessarily violent diatribe, the cocksure, swaggering gangsta rhetoric, the disposable, lazy lines that would realistically have no place on a proper full length record. It lacks an emcee with the charisma that would render such redundancy irrelevant, and as such is mired in mediocrity. I can think of much better things you could spend your money on.