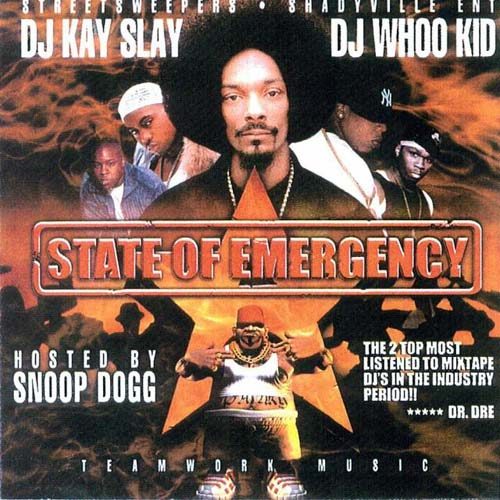 As if New York wasn’t controlling the streets as it is, this mixtape is 100% certification of that fact. All of the MTV favorites and up and coming acts are present — 50 Cent, Fabolous, Cam’ron, N.O.R.E., Jay Z, Jadakiss, Freeway and of course Mr. MTV himself, Eminem. Whatever ‘street’ or ‘raw’ has come to mean to you is present somewhere within the 1:14:02 of playtime on this mix. From the first ‘freestyle’ done by Sauce Money to the last studio cut from Cam’ron, you’ll be swamped by the streets of New York.

This is not your everyday headphone music. This is a musical view of just how gritty the five boroughs can bring it to ya. The proof positive being the little section devoted to the rants and retaliations spawned by NAS. Sauce Money and Nature do some jabbing at the one mic, barbeque spittin’, future predictor, baby-faced MC. Needless to say, some cats out there are rather upset with some things.

And what would New York sound be without the Neptunes’ sound? They aren’t smothering the CD, but you know they make a good showing with the catchy tunes (hey, that’s their new name CatchyTunes). Jada and Fabolous make the most of their production skills, while N.O.R.E. stutters over a thunderous hand clap, “.. caught in LA with a Mexican midget.” All kinds of caps get peeled, pop and dropped during the first 15 minutes of the CD.

Right about now is where I start to question the contents of this package. Right on the cover it says that it is hosted by Snoop Dogg. Now, anyone familiar to the New York mixtape style knows that the ‘host’ is usually screaming all kinds of ish over the tracks. So, I expected to hear Snoop ‘slow talking’ all over NYs finest. Not so.. Snoop delivers some wack limericks just a few times and takes a serious dirt nap at the end of the CD with his homies Mr. Kane and Goldie Loc. Talk about marketing though — Snoop sells!

And you know they got the R&B flavas for you on this joint. Styles and Pharoahe Monch drop their radio ditty, “The Life,” a single that is sure to see a long run this summer. G. Dep and Faith Evans do some “why do they shake their heads and throw their voices out like that?” ghetto expressing with a remix to “Everyday.” Throwing you into the second half is Grafth, as he drops a ‘freestyle’ over Busta’s infamous “Put Your Hands Where My Eyes Can See” beat for about a minute:

“I don’t speak, I talk with revolving heaters
Hoes say I talk like I walk, so they say I talk conceited
I kinda thought that I walked orthopedic

We still slide on ice like we on skis
And the cold flow that I spit is keys on keys
I spit, I sneeze on beats, I’m sick, I’m cold
I got zero degrees on me

What comes up shortly after may be a surprise to many: “Renegades.” Looking at this you’re probably not raising an eyebrow, but this particular cut is done by Eminem and Royce 5’9″. It’s even marked as (Original Version). Which would explain the who, what, why, and how of Jay Zs weak showing in the version featured on his lp. Making fun of what is coming thru ya speaker is DJ KAY SLAY all over Em’s verses. Does Royce do a better job than Hova? Does Ms. Laura wear a wig? Is UnCut, turned down low, the best way for a WASP to keep up with urban booty shaking?

Trickling down the drain are a few more ‘freestyles’ and short verses by some ‘right now’ acts. Freeway drops “Early in the Game” and Cam’ron squeezes out “1st of the Month” – yet another sick, abusive play on Bone’s classic cut. This is right about the time you are fed-up with pushing the forward button. There are two ways that come to mind in looking at this release. 1) This is a great sampler as to what you can expect from the radio and clubs this summer. 2) This mixtape is full of the usual guns, lame boast, fashion, and CatchyTunes music that is flooding hip-hop. It is what it is, and there is definitely a market for this format out there, big and fat, in ya area.