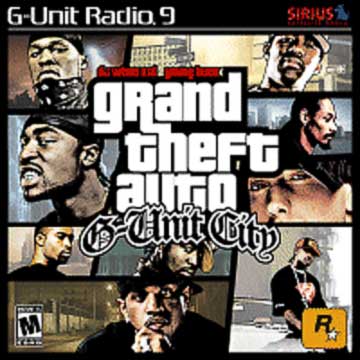 New York mixtapes are a dime a dozen, and the fact there were apparently eight volumes of “G-Unit Radio” before this one just proves it to me. Still you really can’t blame DJ’s like Whoo Kid for hustling this hard, especially if there are people out there who just copped the last volume and can’t wait until the next. And you also can’t blame the G-Unit for getting their extra paper any way they can on the hustle, since as much as 50 Cent and Eminem support them and show love they still don’t sell on their level. My curiosity was also peaked by the fact Young Buck was the co-host of this edition, which I assume means he worked on it either before or after his latest spat of legal troubles. I’m feeling his rap on the opening song “The City,” which uses a very familiar Quincy Jones “Summer in the City” sample for Buck to build his verse on:

“These penitentiary phone calls keep me elevated
My last two birthdays, I didn’t celebrate it
You see me on BET, and MTV
Holdin it down for my town down in Tennessee
I’m tryin to make this shit as real as I can
So that my fans know that I’m not playin
And I ain’t sayin I’m perfect, I’m just sayin I’m worth it
A lot of rapper’s CD’s I ain’t even purchase”

The rest of the album is a mixed bag. Buck’s “Kill 2 Birds” is nice, but not on the same level as the opener. We’ve all heard the 2Pac “Loyal to the Game” remix featuring G-Unit by now, so even though it’s dope one might think they’d use track four for something a little fresher. Buck brings things back into sharper focus though with his songs “Why We Livin For” and “Hold U Down” on tracks five and seven; the latter of which is just him freestyling over the Alchemist beat of the same name but that’s aight cause the beat is still tight. Unfortunately the next song is another recycled track, Snoop Dogg’s “Oh No” featuring 50 Cent. The halfway point has a Whoo Kid featuring Eve, 50 and Lloyd Banks track titled “Porno Star” that doesn’t impress me, so it’s actually a relief to hear a remix of Chingy’s “Balla Baby” up next, which was originally on his “Powerballin'” album but didn’t feature a Young Buck verse on that edition. Buck comes solo again on some old school sounding funk for “2 Bricks,” and then another recycled song in the form of Eminem’s “Never Enough” relabelled as “No Matter How Many” on track fourteen. #16 is a recycle too, admittedly a dope one, but if you haven’t heard Young Buck’s “Bang Bang” yet with the Nancy Sinatra sample, you either didn’t buy his album or listen to it all the way through. By track 18 I’m left feeling that as interesting as this album is, I already own a lot of these G-Unit affiliate songs minus Whoo Kid saying “DAMN!” and “NONSTOP” all the time or all the obligatory gunshot sounds he likes to use. I’d say diehard Young Buck fans might want this to hear some of his new freestyles, but mixtape fans could probably get more original shit elsewhere. And as far as blending or turntable wizardry goes there’s none to speak of, but this is Whoo Kid we’re talking about after all – even Flex got more grip on the wheels than he does. I’m not keeping this one in heavy rotation.