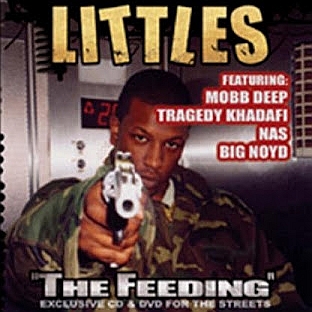 Queensbridge has a tradition. It has a legacy in rap. In fact, it’s fame is spread so far and wide you might have thought it was a borough of it’s own, or maybe even a whole city. Tragedy. Nas. Mobb Deep. The list goes on and on. It may come as shock then to realize that Queensbridge isn’t a city, or a borough, but a housing project. One project in New York gave birth to so many famous rappers? It must be something in the water. Or maybe there’s a cipher in every hallway. Or maybe it’s so damned brutal to live in it inspires people to struggle and strive just to get out. Whatever the case may be, the self-proclaimed next big thing from Queensbridge is a rapper quixotically named Littles.

If you follow the QB scene, you might know Littles already. Besides working with some of the Queensbridge stars mentioned above, he has also appeared on compilations like “QB’s Finest” and “41st Side.” That’s definitely a hot start, especially when you come from a project MC Shan christened “the place where stars are born.” The press kit accompanying his debut album is even more brash. It claims these guest appearances made the public so hungry, the only way to satisfy their needs was “The Feeding.” A big ego is in some ways a necessity to be a successful rapper, but this still seems slightly ludicrous. By way of example, the author of this review (and webmaster of this site) has received over 25 requests this month to cover Little Brother’s album (which is impossible to find in stores), at least a dozen to cover Canibus, and five or six to do Keith Murray (still not available, must be pushed back AGAIN). Not one single request for Littles though. Not ONE. Is the public really that hungry for Littles?

Nevertheless, it’s irrelevant whether or not there’s a demand for Littles. Rappers who put out hot albums create the demand, and Littles is certainly doing his best to push it over the top. “The Feeding” is skinny on liner notes, but the going back to that press kit the fat list of producers reads like a New York new jack’s wet dream: Alchemist, Havoc, and EZ Elpee among others. On top of that, Littles decided to sweeten the pot by offering a bonus “DVD for the streets” with the album. There’s no shortage of guest appearances either: “Ghetto Starzz” features Noyd, “Who’s World is This” features Prodigy, and “Hot 97” features Tragedy. One thing’s for sure, you can’t fault Littles for his loyalty to his project and the rappers who come from it.

Given these attributes, one would reasonably expect Littles to be able to live up to his own hype, thereby creating the hunger that required “The Feeding” to be released in the first place. Unfortunately the moment one starts listening to the album, this house of straw starts to blow down. Sadly, it starts with Littles himself. Classic Queensbridge rappers don’t just have a great flow or great rhymes, but a great vocal tone that makes them distinctive. Shan has that great high pitch that punctuates each line with authority. Nas’ golden throat makes words pour from his lips like fine wine. Prodigy booms with ominous authority, speaking words that could kill you. Littles? He sounds more like a nerd – not as obnoxious as Steve Urkel, but definitely not the speaker who would grab your attention in a croweded room. That’s not saying he’s not a gangster though, and Littles is not shy about saying he had police officers looking up his asshole in prison. Hmmmm. That aside “New York, New York” is the track that introduces us to his thugganomic credentials:

“I’m a leader, with them chromy things acquired my name
Credible, in the hood, streets been had fame
Snatched a few from my ghetto but BK’s my thang
A bunch of handsome young gun holders, I got my own game
New York New York – there’s no city like mine, pay attention
Fuck a 9 to 5, I turned coke, to crack in them kitchens
I went from, mac in the engines to hand to hand pitchin […]
We rent basshead’s apartments, to cook and freak off
They say never keep yo’ stash where you lay yo’ head
Real niggaz get knocked and get out, turn you over to feds
A nigga label you a snitch, shit that’s enough for me
I save it up, throw a fist from across the street”

On and on it goes. He sells drugs, he busts shots, he kills those who get in the way of him making money. Haven’t we heard this story before? Yes we have. After a decade plus of gangster rapping, MC’s have to come deeper than that. It would even be more interesting if every single new jack wasn’t a crack salesman. Don’t they have any dealers turned rappers who used to push weed, or heroin, or crystal meth or ecstasy? Why does it always have to be crack? There’s a good reason though – crack dealers have the reputation for being the most violent on the streets because that’s where the big money is, and unknown rappers need that credibility of being wild, crazy, and well paid to establish their persona. It’s too cliched to hold weight any more though, and what Littles spits here and on most of “The Feeding” is the cliches of the street enforcer we’ve heard done before and better by narrators like Kool G. Rap and charismatic entertainers like Noreaga.

If his somewhat annoying voice and tiresome uninspiring rhymes were this album’s only problems, at least Littles could still say he had beats. Well he does to a degree, but the production was definitely not professionally mastered on this CD. You can actually hear an audible POP like lint moving through a reel to reel head on the track “Bring It.” From song to song you’ll find yourself playing with the volume to keep a constant level, which sould never happen on any well put together album. If you turned it up to hear “Talk to ‘Em” and the “Skit” (actually a rap) that follows, you better dial it back for “Where I’m From” or you’ll blow the headphones off your ears. By this point you’ll probably have noticed that several of his tracks ripped off other New York rappers wholesale: “Halla” is actually “Holla” from Jay-Z’s “The Dynasty”, while “You and Me” is even more obvious – it’s Trina’s “U & Me” (maybe he thought he’d get away with it cause he’s from New York and she’s from Miami). Suddenly, it seems very clear why no production credits were found in the liner notes of this CD.

Going into this album, Littles had the opportunity to make a grand statement to the world and announce his arrival as the new heir to Queensbridge’s throne. Songs like “Flash the Barrel” do the opposite, with mind-numbingly dumb lines like “Flash the barrel on that Smith & Wesson, I have you niggaz undressin.” We’re supposed to be impressed? Perhaps Littles did spend a lot of time in prison as opposed to rapping in ciphers, because his voice doesn’t exude the cocky confidence of other MC’s that could at least make such tiresome lines palatable. Stick to the songs featuring anybody other than him, if you bother to cop this one. As for the bonus DVD, who could care less? All “The Feeding” proves is that if you were hungry for dope rap from QB, this one won’t fill you up at all.