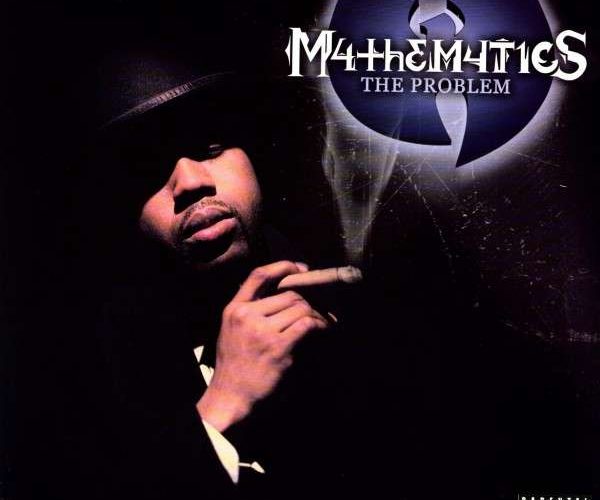 Mathematics released “Love, Hell or Right” last year as the beloved Wu-Tang Clan was once again on the rise. They seemed to be slowly gathering strength for another campaign. Solo albums were dropping left and right, RZA resurrected his adored fame through “Kill Bill”, and their long lost brethren Ol’ Dirty Bastard had finally been uncaged. Just as things seemed to be going beautifully for the Wu, ODB died tragically in their own 36 Chamber’s studio. The family collapsed inward at the unexpected blow, snubbing their presumed re-re-re-resurrection. It seems no matter how hard they try to do right, something horribly wrong always spoils it. Since then, news of the kung-fu-conceit crew has been discouraging, almost whispering at their final disintegration. Yet, here is Mathematics returning with a follow-up album featuring the entire clan. Say What? In fact, “The Problem” is the first, real sign of life for the group since Dirty’s death.

Originally the clan’s road DJ, Mathematics finally surfaced as a true producer on “Love, Hell or Right”, although an unstable one. It is probably the most mercurial album I’ve ever heard. The juxtaposition of material is amazing, jumping from radio worthy Wu-bangers to bootleg quality, sample-screaming interludes. It was an oil-n-water mix of material. The album is still enthralling somehow, in that manic, I-don’t-give-a-fuck type of way, and good enough to give Mathematics a second chance at a solo career.

“The Problem” starts off with “C What I C”, featuring T-Slugz & Eyeslowâ€”an MC that covered most of songs on Math’s last album. It’s a pure adrenaline track, like a Ludacris beat overdosing on speed. For contrast, Math follows it up with slow, sexy “Strawberries and Cream” with Inspectah Deck, the RZA, and Ghostface. If you are familiar with Math’s original version “Strawberries” on Ghostface’s “Bulletproof Wallets”, this is a completely different form of eroticism. “Strawberries” is like the pounding, out of control kind of quickie, while “Stawberries and Cream” is the slow, sensual, tantric-type of sex. It’s hard to pick a favoriteâ€”as in real lifeâ€”but both are equally eargasmic. Ghostface sounds at home talking dirty on both versions:

“Five and a half in Boys, ass is off the hook
High school pussy, heard you got the best nookie
Sugar walls, watch and love, slide right on my dick
Gon’ palm on ya ass like this while you ridin’ it
I’m about to cum boo-boo, chill for a sec
Feel it at the tip ma’, ya pussy’s too wet
One false move and I’ma blast like the very first time
Burnt you with candle wax while you was slobbin’ mine
Dick is sensitive, you move, baby here it is
Oh Lord, I told you not to move you dirty broad!”

There is another song here. Method Man shows up on “John 3:16”, a previously “unreleased” song that managed to make onto about every Wu-Tang mixtape in the past year. Eyeslow, L.S. and Ali Vegas compile an assortment of sordid, hood stories on “Winta Sno”. Then things heat back up with “Two Shots of Henny” featuring a whole slew of artists broken up by a brief chorus. It’s a hot party track, even with six MC’s sharing air time. Much like the rest of the clan, Mathematics mustered an idiosyncratic style all his own. His beats are easily distinguished from fellow Wu producers RZA and Tru Masta, the same as picking out RZA’s slurred “talk like Bjork” voice against Ghost’s whiny-crying flow. It is an unusual style, intense but erratic; the loop comes as a chaotic, jumbling of instruments, samples, and scratchingâ€”that all roll together rhythmically somehow. “Bullet Scar” with T Slugz

“Real Nillaz” is more your stripped-down, raw Wu-Tang beat. Ghostface and Raekwon, a historic rap pairings, sandwich Eyeslow while Buddah Bless runs the chorus. Next newcomer Bald Head handles “Coach Talk”, confidently like a aged vertern, rideing the pimped-out gangster beat with his slow, savvy tone cocky demeanor. Method Man and GZA bounce over a funeral organ in “Rush”, trading verses like old times. GZA is still one of the most terrirfying MC’s I’ve ever heard.

“The sound echo through the neighborhood to vibrate
circulate the roughest throughout the tri-state
the wise attract to it because it’s magnetic
though slow kids stuck on the block they don’t get it
they don’t want to set it, put the track on immediately
quick fast, clock ticks to the blast you see, bugged out
they scatter with the lights on
we raid those local spots when they cut the mics on
rollin’ with the talent, the beats, and rap verse
crowd get excited with the heat and clap first
musta’ had a hot hand to go in his waist band
said he had to lick a shot for a top-notch clan
multiple swordsman, blades sharp
rip through your heart, MC’s want no part
of any type of conflict, or non sense, them will be spun quick
get thick, the problem goes beyond sick”

Ghostface, Masta Killah and a handful of other artists go back to back in a true Wu-Tang fashion on “U.S.A.”. “Tommy” tells the story of packs another six-shooter of MC’s including Allah Real, Eyeslow, Angie Neil and Bald Head. Ol’ Dirty Bastard manages to while U-God provides the bass:

“Little Tommy got his hands on a gun
He only thirteen, smokin weed
runnin’ with thugs that’s like 33
he tryin’ to grow too fast
cuttin’ school, at a hooky party feelin’ on ass
till some haten cats came in
Tommy started grippen
Dude looked Tommy up-n-down and Tommy got offended
Shots went off, everybody runnin’ rapid
Little did they know Tommy loved gun clappin’
The kid bounced him before he even got hit
It lets up, but shortie got caught in between that shit
Now, who’s gonna honey’s moms how she cut school
At a hooky party with girlfriends and wild dudes
Who gonna tell the cops?
Who getting’ locked for it?
Tommy fled the scene before somebody else saw him
He ran fast down Fulton Ave, tossed his gun
Thinkin’ to himself, ‘What the fuck I done!'”

Mathematics sticks to the hardcore, time-tested Wu-Tang style: rough, rambunctious beats, a six-shooter of MC’s firing off back to back, no R&B, no bullshit, just hardcore hip hop. But Math’s adherence to the “Wu-Tang Manual” doesn’t end with his production design or his family-first selection of guest MC’s, the album stays loyal in content as well. Wu-Tang ran much deeper than skill or even style. The kung-fu movie theme the public used to identify them was only a staging ground for a true temple. They trained their “student” not just in the art of fighting, or in this case rhyming, but in self-empowerment and spirituality. In short, they fought for a better tomorrow. “The Problem” centers around the same idealism, the same principles. Although rap relapsed back into the â€˜money, drugs & hoes’ rehab center, Wu-Tang still made a difference for their listeners. Mathematics knows this, so he focuses much of the content on “The Problem” on the issues affecting Black youths. Songs like “Tommy” and “Winta Slow” and “Bullet Scar” draw subtle attention to the woes of street life by exposing the lost, and more realistic, stories of the hood: the rappers who don’t make it, the drug dealers who get incarcerated instead of getting rich, the lost sons, the debauched daughters, the suffering, the cycle. In essence, the problems in America’s ghettos.

Mathemtaics’ intentions are admirable, being that he debases violence instead of glorifying it, but “The Problem” ultimately succeeds because it is an excellent album. The music is vibrant, dynamic and lyrically backed by the Wu Tang Clan and family. (What else do you need?) Also, “The Problem” improves on its predecessor by its consist quality. Math still jumps around somewhat unpredictably, but the divergence comes in creativity. Each song may feel