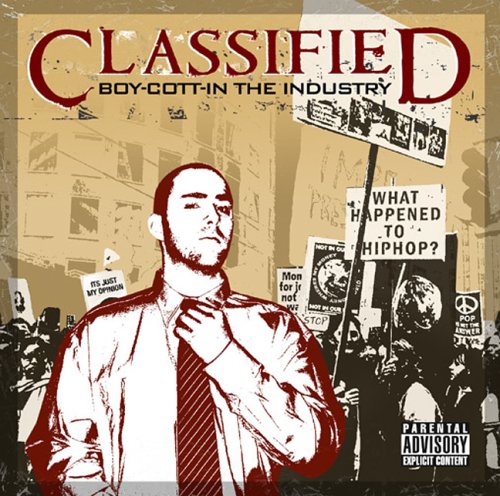 Rather than front like I knew anything about Classified before this release by spitting out the requisite background info I’ll get straight to the point, Classified’s “Boy-Cott-In The Industry” both surprised and impressed this reviewer. To clarify, I wasn’t surprised and impressed because this dope album was made by a white guy from Halifax, Canada, though Classified is just that. What impressed me is that such a dope album has come and gone with little to no fanfare in the “industry.” When I say the “industry” I of course am referring to the good ole American rap game, the measuring stick to the world when it comes to Hip-Hop. Not to slight Canada’s music industry or Classified’s relatively strong sales according to Canada’s version of BillBoard, but despite any success there Classified is still basically unknown in the rap game.

Why Classified is unknown has more to do with his frigid surroundings than his skin tone, as American rap fans have been unwilling to accept rap north of the Great Lakes. Even Kardinal Offishall’s catchy rap/reggae blend failed to catch fire at the height of the dancehall reggae craze. It really is a shame, but fans lucky enough to catch a listen will be rewarded by Classified’s introspective rhymes, on-point delivery, and bumping beats.

The title of this CD, “Boy-Cott-In the Industry,” reflects the tone of the CD perfectly as Classified shares both his disgust with the current trends in mainstream Hip-Hop and the fact that despite his problems with and in the industry he can’t leave the rap game alone. “It’s Just My Opinion” starts things off right with a tight brass and string based beat and Classified basically telling critics and fans alike that no matter what people say or think he’ll always stick to his guns and they should do the same. “Listen” is a catchy track, with a plucked guitar loop and electric guitar hook. Though the subject matter isn’t exactly dance-floor material, the beat could definitely get the crowd moving. “No Mistakes” is a mellow track that finds Classified reflecting on his mistakes during his music career and dropping knowledge so others won’t follow suit.

“Problemz” is another dope track featuring Classified and 4 other emcees all dropping solid verses about various problems, it’s not quite Jay-Z but its good in its own right. “High School Behaviour” is an original track addressing Classified’s high school experience, besides being an interesting story/reflection the song also goes to show that the high school experience is universal. “5th Element” had me double checking the liner notes to make sure DJ Premier hadn’t been kidnapped by Classified. Though the track imitates DJ Premier’s style, with a tightly scratched hook and a triumphant looped beat, it’s a tribute to his style rather than a bland imitation. The “Beat Auction Interlude” that follows is actually a pretty interesting and funny way for Classified to showcase a few of his beats. The next standout track is “Maritimes” and though I may be off, it sounds like Classified enlisted a bagpipe sample for this Canadian anthem, for those not familiar with his home Classified spits:

“I’m from the East Coast of Canada, home fo the bag pipe
Known for the fiddle players, beer and out keg price
Known for Alexander Keiths and the ____
Home of the Mooseheads but I don’t really go there
We pay a buck for a litre of gas and
Smokes cost $10 a pack and
We always mix our tobacco with weed, its just the way
its always been shit is natural to me
So let me tackle the beat and unravel the scene
Let you people know what you never travel to see
We got battle MC’s, we got story tellers
And we got awful MC’s and corny motherfuckers
We got everything you wanna hear
Conscious to Back pack, Commercial to Gangsta
R&B to Abstract, grunge to Rock, Classical to Country
So many artist workin’ but no one making money
Welcome to the East Coast, home of the innocence
Still Piegon Hold, as a farm or a fisher man
No mager lake teams, baseball or hockey
no urban radio just country and poppies
I’m trying to shake these stereo types
So give me space please, let me air out my life
I don’t even eat fish, shit I never tried lobster
Cant play the fiddle, and never was a logger
But I swam in clean lakes, and enjoyed cool breezes
But Halifax Harbours like swimming in diseases
We only known for Anne & Green Gable
Coal minds to Blue nose and P.E.I. Potatoes
Maritimes, its better then that
We livin’ in the nether times so dead it with that
We got Universal Soul and Buck 65 an
The whole UCG and of course Classified
We got Back Burner, Goo Night, Alpha Flight, Lock Down
Mic Boyd, First Word, Tro Biz and Hell Town
And a million other artist, trying to get their flow heard
And Let you know that we still workin’ on these outskirts
We trying to blow like Halifax Explosion
Or maybe Anne Marie I know she’s Nova Scotian
A Hurricane ______ blowin from the ocean
Either way it goes I’m still reppin for my coast man”

Of course the album doesn’t trail off as it goes along as Royce Da 5’9” and Choclair show up for “Unexplainable Hunger” and both tear the mic a new one. “F.A.D.S.” is another tight track addressing Hip-Hop’s obsession with fads and the problems keeping up with the joneses creates. “Sibling Rivalry” is another interesting track which finds Classified arguing through rhyme with Mic Boyd over who’s better, both emcees make compelling arguments and the track ends up a dope, yet playful, battle. The album ends with “What’s Real” and this time around Classified actually succumbs to a fad himself, flipping a sped up sample for the beat. The result is a heartfelt track addressing those Classified has neglected during his rap career.

Classified’s “Boy-Cott-In The Industry” may not be a groundbreaking album, it may not contain any radio singles, and it may not get much play in the lower 48 states, but anyone who does tune in will be treated to a dope album from a great emcee/producer. Classified’s approach on the beats isn’t new or highly complex, but he has a knack for coming up with catchy and head-nodding music track after track. On the mic Classified doesn’t have the illest metaphors, and he’ll even admit it, but for whatever he may lack in other areas he makes up with sincerity and honesty. Combined, Classified’s dual skills produce music good enough to make any Hip-hop fan want to grab a picket sign and join the boycott.