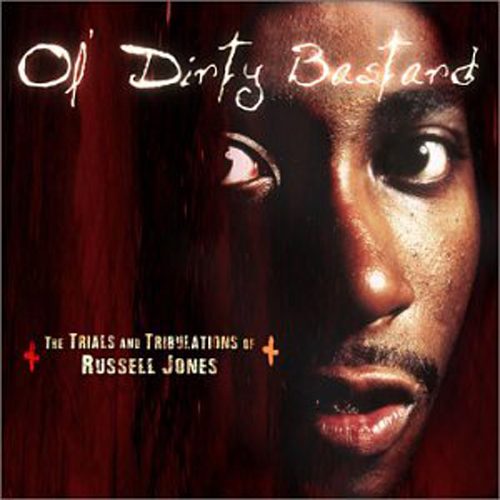 Ol’ Dirty Bastard :: The Trials and Tribulations of Russell Jones

If you thought that Russell Jones b/k/a the Ol’ Dirty Bastard would be kept away from recording studios while he was doing time and going in and out of drug rehab, think again. Either the reports of his legal headaches are greatly exaggerated, or he’s got one hell of a furlough/work release program. Despite having more drama in his life than Mary J. Blige can sing about for a whole album, the Bastard is back after a three year hiatus.

A few things have changed since we last saw Ol’ Dirty back when “Nigga Please” was released. First of all, ODB has joined a brand new label – D3 Entertainment. If the name sounds familiar and you can’t quite figure out why, D3 is a subsidiary of the infamous Death Row Records. Yes, that D3 – the same one that released new albums by both Snoop Dogg and Tha Dogg Pound last year even though both artists long since left Tha Row. That’s not the only shocker though – NONE of the tracks on this album were produced by RZA, and NONE of his brothers-in-arms from the original Wu-Tang Clan appear on this album – just third-stringers like Buddha Monk. What gives?

The record label’s website offers it’s own interesting explanation of this new Ol’ Dirty Bastard album: “The album, which contains all new material from ODB, was recorded after his departure from Elektra Records and before his incarceration.” This may account for the fact that no major Wu members were available to produce or record for his LP — D3 got Mr. Jones to lay down as many vocals as he could in a hurried set of studio sessions, with plans to sort out the material into a full album later on after he was incarcerated (since last July, also according to the website). The claim of “all new material” though starts to get stretched a little thin; which unfortunately is all too typical of the D3 albums from former Death Row alumni. “Zoo Two” should be instantly recognizable to Ol’ Dirty fans as “Damage” from “Return to the 36 Chambers”, and “Dogged Out” is a rehash of his song “Dog Shit” from Wu-Tang Clan’s “Wu-Tang Forever” now featuring Too $hort and Big Syke.

Therefore it’s fair to point out that although this album is 18 tracks long, two of the tracks are just remixes, at least two of the songs aren’t “new” and six of the “tracks” are just skits and not songs at all. Therefore if you really believe you’re getting a whole album of “new” material you’re in for a DEEP dissapointment. You’re left with eight original songs, the majority of which are produced by some cat named Tytanic. One of the few exceptions is the lead single “Dirty & Stinkin'” featuring the Insane Clown Posse and produced by One Eye. Ironically or not, this is the best song on the entire album and may have set-up anybody who heard it with unrealistically high expectations of a great followup to “Nigga Please.” Ol’ Dirty sounds surprisingly lucid on this record, but does so without losing the trademark comedy of his lyrics and flow:

“This recordin is dirty and it’s stinkin
Funkier than Pepe LePew, so I was thinkin about
(WHAT?!) droppin this single on the charts
(YEAH!!) Lettin you know hey, the kid has heart
I never deny myself as bein dope
But in my last jam n#%#!z slept on my notes
You thought that I was weak? Huh, let me speak
My rhymes come funkier than your grandfather’s feet”

For some fans of Ol’ Dirty this song alone may be worth the price of admission, but after two demented and bugged out hip-hop classics from Russell Jones and countless crazy adventures as part of Wu-Tang Clan my expectations for ODB are a little higher. This album probably had the potential to be more than it is, but it routinely falls short. “Dogged Out” is a perfect example: recycling an Ol’ Dirty verse from the past with guests like Syke and $hort could have made the song a MONSTER hit, but Tytanic’s dreadful cheesy synth beat proves his name is ironically apt – he sank this album. I’m not trying to player hate at all, I’m just saying that a drunken Ol’ Dirty banging away on a Steinway piano aimlessly with total lack of motor coordination STILL could have made better beats than “Anybody” or “Reunited.” On the latter track it’s particularly insulting, because a slobby slurring and singing ODB provided the PERFECT vocals for a Wu-Tang classic, but the music pulls it into mediocrity which screams to be skipped over every time.

What’s the bottom line? As usual, D3 Entertainment promises big things and fails to deliver. This time though instead of ripping off one of their own ex-artists who can retaliate with professional full-length albums on their current labels, they’ve seriously damaged the career of a man who is already in prison and can’t do JACK SHIT about it. What’s even MORE scary is that he may still be signed to D3 Entertainment after he gets OUT – and that may be stinkin, but it’s certainly not Ol’ Dirty. He needs to ditch this label like an empty bottle of Olde English or one of his baby momma’s with the QUICKNESS and go back to the Wu. Where’s Bobby Digi when you need him?