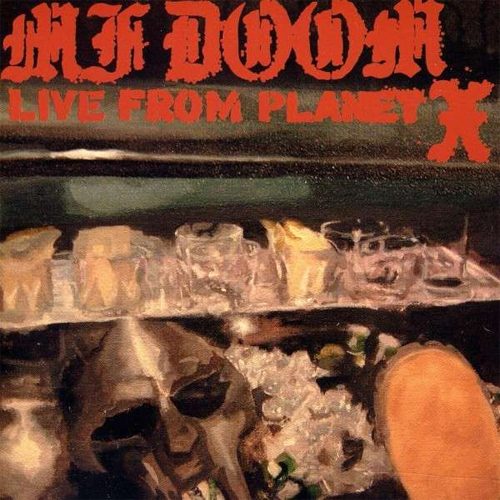 The man called Doom has been exploring the imaginations of hip-hop minds for an increasingly long time. It seems like only yesterday that I was first dipping my toes into the water of “Operation: Doomsday,” and six years later, he has gradually become the underground superhero (although he prefers supervillain) that he is today. There is no new material on “Live From Planet X,” and those who are not already acquainted with MF’s style will not appreciate it. This release assumes that his legions of fans need something to tide them over. His faithful (myself included) are a spoiled bunch, having received three full-length releases from the Metalface Terrorist in 2004 alone. With plenty of rumored projects on the way, “Live From Planet X” serves to distract the hungry before his 2005 releases arrive.

Concert albums are rarely attempted in hip-hop. This is probably due to a few factors. First, it is fairly difficult to engineer a live recording to sound as professional as a traditional studio recording. Additionally, with most live hip-hop performances, live instruments are not used, and the recording of rapping over the original music often comes across as a less refined version of each performed song. Finally, if not mixed correctly, the crowd can be an unnecessary distraction from the actual music. The traditional rock show translates to recorded music far better than rap music does in most cases.

The DNA Lounge in San Francisco is where the metaphorical “Planet X” will exist in the minds of heads everywhere. MF Doom rocks for about 40 minutes non-stop on the CD, which at first seems short. Anyone who has been to a show, though, will tell you that he barely even pauses for breath. Within those 40 minutes are 16 separate songs, mostly full versions, and the beats simply fade into each other without a break. Doom’s catalogue is so extensive that he would have to rock for hours to please all of his fans. He does an admirable job at this show, playing as MF Doom, King Geedorah, Viktor Vaughn, and the Madvillain. All of his releases except for “Venomous Villain” are represented, which is impressive considering that the concert took place before “Madvillainy” and MM..Food” had even been released. “Doomsday” is an especially notable presence, with seven classic songs. Of course, in a more recent concert, there would be more than three short songs offered from “Madvillainy,” but the timing of the recording can be faulted for that. Few live rap albums exist, so his fans won’t be complaining about the selections here.

Those that aren’t at least superficially familiar with MF Doom should stop reading here, because they will not appreciate the differences between his recorded music and this recorded performance. There are some songs that easily survive the subtle alterations that take place, and those that do will provide a fresh perspective to some truly great songs. Much of the material from “Operation: Doomsday,” especially, actually sounds clearer than the originals, simply because the lyrics on the original are frequently murky and slightly difficult to discern. On cuts like “Hey!,” Doom’s verses actually attain more coherency than their predecessors. This is definitely not to say that I prefer those offered here, but listening to this album enhances my future absorption of some of his older material. The song “Doomsday” stands so close to my heart, however, especially having witnessed MF perform it twice, that this version doesn’t particularly spark any interest in me. I’d much rather throw on the official song.

There are a few interesting exclusions, which could have served to fill out the show a bit more. The RJD2-produced “Saliva” does not make an appearance, which is a bit disappointing, especially because the marvelous “Vaudeville Villain” album is only represented with the opening “Change the Beat.” Another “Take Me To Your Leader” cut could have been included along with “The Fine Print,” although he only has a few solo songs on that album. The most pleasant surprise that Doom purists will encounter is the selection of songs from “Operation: Doomsday,” including his surprisingly proficient performance of the difficult uptempo “I Hear Voices.” It is also interesting to hear the early versions of a few cuts from the classic “Madvillainy” before it was even released.

The mixing on this record is not as professional as the actual versions of each song, but the crowd is mostly inaudible and the sound quality is good. One MAJOR problem exists with the mixing, though, which heavily slows the replay value. There is one single track which contains the entire live performance, a forty minute opus of a song. As you might imagine, it will be quite frustrating to locate your favorites, especially if they reside towards the end of the track. I don’t know how difficult it would have been to separate the songs just by breaking between performance songs, but I can’t imagine it would have been difficult. This simple action would have made the disc far, far better because of ease of accessibility. It is similar to having a VHS instead of a DVD, except you will frequently want to find individual scenes and be forced to use the fast forward button. For the most part, the sound quality and material quality are high, so it is a great disappointment that such a miniscule aspect of the production could have been botched so badly.

For those who can get past the difficulty of navigating the one track, the benefits are plenty. If MF Doom isn’t someone you have a heavy interest in hearing live, don’t waste your time. The fans, though, will love this release regardless of the lack of separation of tracks. Every song is worth hearing, so the luxury of skipping the lesser material will not be missed. A concert album is much easier to handle in this odd format, because the listener inevitably hears the record as the audience would have, from start to finish. Providing the consumer the ability to skip around, though, should have been on the top of Nature Sounds’ list. Doom’s faithful will hardly bat an eye, though, because this is exactly what they want to hear.