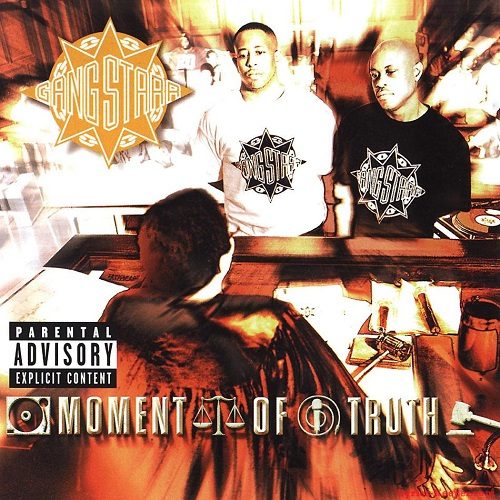 After doing Back to the Lab reviews of Group Home and Jeru the Damaja, I am running out of superlatives to describe DJ Premier’s magnificent work in the nineties. The heart of his catalogue, though, rests within the confines of the duo Gang Starr, sharing duties with Keith Elam, aka Guru. Say what you want about Guru’s monotonous flow, but he is really quite nice on the mic, and he always sounds at home over Christopher Martin’s engineering. 1992’s “Daily Operation,” their third record, is one of the best rap records ever made, a whirlwind of jazz samples that are almost mechanically separated from the drum tracks. From that moment on, throughout the nineties, Primo was the absolute best. He could craft thumping beats like “DWYCK” and “Outta Here” just as easily as the more complex, sample-driven works that he usually relied on. 1994’s “Hard to Earn” was a bit too experimental for some people, but Gang Starr stayed near the top of the game. A painful four year layover awaited the fanbase, but Guru and Premier made it worth everyone’s patience with the wonderful “Moment of Truth.”

Guru has never broken ground, but much of the success behind “Moment of Truth” can be given to him. Premier is a constant, so the elevation of Guru’s rhymes adds an extra layer to the already lush listening experience. Primo’s initially awkward beat for “You Know My Steez” thumps with a crooked combination of bass and treble, but Guru actually snatches the shine from his counterpart:

“The horror be when I return for my real people
Words that split wigs hittin’ like some double Desert Eagles
Sportin’ caps pulled low, and baggy slacks
Subtracting all the rappers who lack, over Premier’s tracks
Severe facts have brought this rap game to near collapse
So as I have in the past, I whup ass
Dropping lyrics that be hotter than sex and candlewax
And one-dimensional MC’s can’t handle that
While the world’s revolving on its axis
I come with mad love and plus the illest warlike tactics
The wilderness is filled with this, so many people
Searching for false lift, I’m here with the skills you’ve missed
The rejected stone is now the cornerstone
Sort of like the master builder when I make my way home”

Guru’s flow drastically improved in the four years between Gang Starr albums, and this is the most obvious difference. In the past, he had displayed a passion and diversity of subject matter, but he didn’t always sound as natural as he does here. This can partially be attributed to the production, because Premier’s previous work was not nearly as smooth on the ears as “Moment of Truth.” Their previous opus, “Daily Operation,” was consistently brilliant, but the production was not necessarily the easiest to rhyme over. There are several single productions on “Moment of Truth” that are among Premier’s silkiest and most relaxing. “Robbin Hood Theory” immediately follows the offbeat “You Know My Steez” with drums that are barely audible, and an incredibly catchy and inauspicious loop. Guru can’t help but travel effortlessly through this song because the beat is so slick. “Above the Clouds” with Inspectah Deck achieves the same effect. The beat is absolutely stunning, one of Primo’s most soulful and touching, and the Rebel INS has no trouble adapting his already potent flow to the music.

There are twenty tracks on this record, and each one is unique and deserving of attention. “JFK 2 LAX” has Guru defending his honor to the law over another great production that consists of wailing vocal samples and the slightest wisp of a trumpet in the background. The title track is introspective on Guru’s part, and Premier glues the sample to the drums so that they can barely be distinguished from each other. On a few separate occasions, the tempo is sped up and the edges sharpened to create the uncompromising street style that Gang Starr has dabbled in plenty before. “B.I. Vs. Friendship” features M.O.P., and whenever the Mash Out Posse hooks up with Primo, it is magical. Premier accentuates the drums more here, with a much more defined accompanying sample. Above all, this is a welcome break from the plush quality of most of the previous music on the album. Following this is “The Militia,” with Big Shug and Freddie Foxxx, which is one of the best posse cuts you’ll ever hear. Both Guru and Shug bring their â€˜A’ games, but Bumpy Knuckles crushes on both the hook and the third verse:

“I’m in the control of my game, you must respect me like the ref
Uh-huh, you disrespectâ€¦ you get the tech
I turn you fake niggas on and off, like I’m the clapper
I rob so many niggas, they should call me Jack the Rapper
I’ll the illest nigga doing this, dead or alive
Gloria Gaynor on you motherfuckers, “I Will Survive”
You can try to come at me, but do you want the kick back?
You snap inside the cage of a pit, and you get bit back
My war is so tight, my drama so ill
Beef with me hangs around like an unpaid bill”

The only song on “Moment of Truth” that even remotely resembles any of the duo’s previous work is “The Rep Grows Bigga.” The cautionary tale of egos in hip-hop features a beat that is similar to the classic KRS joint “MCs Act Like They Don’t Know,” but it is varied just enough to sound unique. The intro to the song is a clever mockery of the typical rapper’s “shout outs,” accompanied by Heather B. The second half of the album is less notable than the first, simply because instead of unleashing a string of new-school classics as on the first half, Gang Starr settles for a consistent, solid collection of tracks with subtler production and Guru’s educational musings. “Make â€˜Em Pay” has a stunning guest shot from Krumbsnatcha, who provides a good old-fashioned attack on rap gangstas, and a flawless beat from Premier. Scarface pops up on “Betrayal” with excellent results. The biggest surprise, though, is “The Mall,” which features G-Dep and Shiggy Sha. Guru rips the third verse, easily outshining the guests, who are impressive nonetheless. This is actually the only song with guest emcees in which Guru outshines the others. There are a great many memorable guest shots here. In every other case, Guru is outdone not by his own lack of skill, but by the performances of the likes of Freddie Foxxx, Inspectah Deck, and M.O.P. Despite the guests occasionally snatching the attention, he easily holds each solo song down by himself.

For most groups, a twenty track disc would mean at least some material that could have been left off. Gang Starr is no normal group, though, and “Moment of Truth” is no typical LP. There is maybe one song that could have been left off, in “She Knows What She Wantz,” and even that is a stretch. Guru and Premier have consistently been the best duo in hip-hop, and along with “Daily Operation,” this is their finest moment. Guru has grown up a lot in terms of his delivery and rhyme structure from line to line, and DJ Premier is his usual self, branching off again in favor of smoother jazzy production. The best records never sound dated, and this album is just as fresh and relevant today as when it was first released.