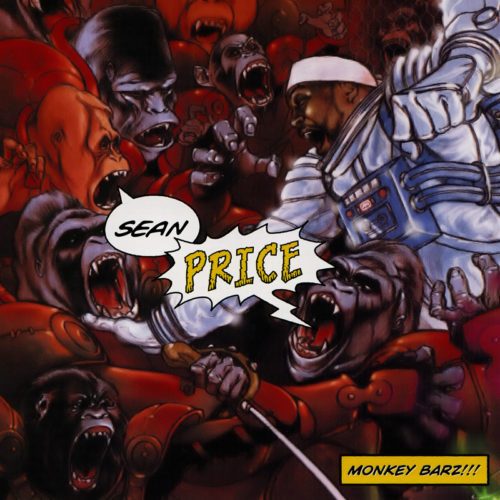 Man, how long have we been waiting for this motherfucker to drop? Anybody remember when the first single for “Monkey Barz” dropped, that joint with the kids in the chorus? Anybody remember Ruck shouting out the record on his appearance on Jedi Mind Tricks’ “Violent By Design” record? After what seems like an eternity, Sean P has FINALLY deemed it fit to unleash his solo debut upon a public that met Rock’s canned LP with considerable animosity and in some cases, indifference. While I have no idea as to why it took him THIS long – hell, JMT have issued two full-lengths since “Monkey Barz” was first announced as a work in progress – I am somewhat glad that I finally have this disc in my hands, and that it is far from the lukewarm, anticlimactic pile of fetid blandness that I was expecting. To be fair, Sean P hasn’t really maintained any kind of artistic momentum in recent years, issuing sporadic singles and making bizarre magazine appearances (dude was in XXL a year or so ago), occasionally peering out the haze of obscurity to bless us with his uniquely callous, bestial presence. As such, I didn’t entirely know what to expect of this record, but my sentiments towards it before popping it in the stereo were largely negative, considering the fact that recent Black Moon and Beatminerz endeavors have been little more than underwhelming. This is actually good, though!

If you were as big of a Heltah Skeltah fan as I was (“Leflaur…” being my single favorite rap record of all time), you would already be acutely aware of Sean P’s juxtaposition of animalistic, swaggering gangsta content with a laconic, nonchalant delivery. The fare here is far from revolutionary, revolving almost exclusively around the braggadocio and grim-faced posturing that has typified much of Ruck’s career, but in Ruck’s case this is far from a detriment, his deceptively complex, metrically flawless and unnervingly captivating delivery seamlessly meshing with any beat thrown in his direction. Opener “Peep My Words” begins on a somber, pallid note, a stark and melancholic melodic loop and cruel drum pattern accenting Sean’s bare bones, gritty content. The rest of the record follows a similar path, Sean P preferring to unravel his lucid and nihilistic style over dark, hypnotically simple compositions that hark back to a simpler era in East Coast boom bap, removed from the pseudo-progressive pretension of much underground rap today. “One Two Yall” features a nude, insistent single chord keyboard loop and thumping, leviathan bass, “Shake Down” with Starang (one of my fave rappers EVER, haha) and Steele of Smif-N-Wessun is a lumbering kick and hi-hat composition accented simply with a vocal loop for the hook, allowing Sean’s vivid and quasi-G Rap labyrinthine flow to fully brim to the top. The perennially underrated Agallah soundtracks “Jail Shit” with partner-in-crime Rock, an absolute CORKER of a track that synthesizes lurching, trunk-rattling G-Funk basslines with Stoupe-ish strings to beauteous effect, perfectly supplementing BRILLIANT performances from both emcees (Rock being in immaculate form here) to provide the standout of the record.

Of course, not everything is perfect here – the rootsy, organic compositions presented by Justus League alumni Khrysis and 9th Wonder feel at odds with Ruck’s uncompromisingly shoot-straight hardcore fare, PF Cuttin’s “Mad Mann” feels a little amateurish for my tastes, the drums sounding flat and electronic, “Spliff N Wesson” is a little lazy for the usually impeccable Ayatollah. “Fake Neptune,” a comic potshot at hip-hop’s reigning wonder duo, complete with Clipse impersonations and Pharrell-lite hook by Buckshot, is a novel and brazen concept, but should have been kept to being a single B-side, instead of being wedged awkwardly between more serious fare. To be honest, I could have done with some Beatminerz production on this piece, but that is a rather minor complaint considering the beats offered here are uniformly impressive, affirming that Ruck can hold is own without the help of his illustrious in-house production team.

That being said, Ruck is in sparkling form here, having lost none of the vigor and unwavering vitriol that helped make Boot Camp Clik/Duck Down such a vital force in East Coast rap once upon a time. If you consider yourself a fan of the pummeling, unapologetically East Coast hardcore that Duck Down peddled in New York’s golden era, this is probably already on your priorities list. Purchase!