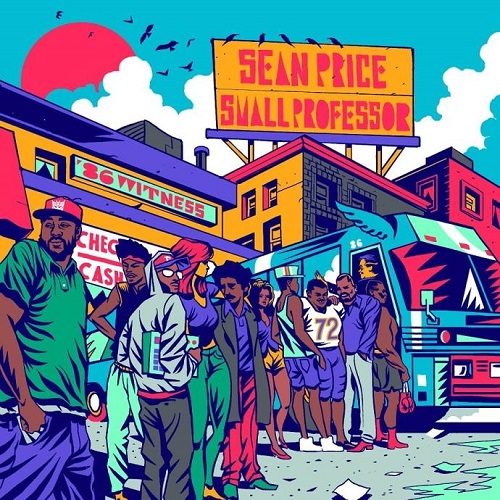 The year 1986 was a turning point in hip-hop. Although the nascent culture had started to invade middle class America through films such as “Wild Style” (1983), “Breakin'” (1984), and “Krush Groove” (1985), that very culture’s music experienced colossal commercial breakthroughs in 1986 that established it as something greater than the passing phase that many initially thought it to be. Artists such as RUN-D.M.C., the Beastie Boys, Eric B. & Rakim, Salt-N-Pepa, Kool Moe Dee, Boogie Down Productions, the Juice Crew, and Stetsasonic all helped to usher in this watershed moment in hip-hop. Yes, 1986 was when hip-hop began its much-heralded “Golden Age” era. Many rappers, most of the old school and some of the new school, often speak fondly of this era’s beginning and the music that came out of it. Some listeners consider the Golden Age to be a vaunted era since its passing and therefore consider it irrelevant. The irony in that line of thought is what brings us to this review: Sean Price died in August of 2015, but is still considered one of the best rappers on the mic by true hip-hop heads. Even in death, he carries on the shit-talking word-combo battle skills and metaphor proficiency of Rakim and Big Daddy Kane, respectively, but with the street aesthetic of the early B.D.P. records. Philly-based producer Small Professor (with his moniker being a play on that of the Main Source member) was working on a collaborative album with Price prior to his death. The result of that partnership is “’86 Witness”, a semi-homage to the year 1986 in a similar vein that Boston-based duo Statik Selektah & Termanology often pay to the year 1982 on their own joint albums. Over Small Professor’s hard-hitting boom-bap laced production, Sean Price continues to dazzle listeners from beyond the grave with his over-the-top rhymed threats conveyed via his trademark slurred delivery.

DJ Revolution was recruited to create the scratches, cuts and, in fact, he does the “Bear Witness” intro for the album. The album’s first official track, “Refrigerator P”, also includes the DJ, but the main star, of course, is Mr. Price. Only he can connect rhymed references to “Mean Gene” Okerlund and former Chicago Bears defensive lineman William Perry (aka “Refrigerator P”) while boasting that “you’ll never catch P on a girl song / I’ll smack da shit out’cha ‘We Are the World’ song”. Small Professor’s dark string loop deserves mention, as does DJ Revolution for splicing in a sample from the late Patrice Oneal’s stand-up special, “The Elephant in the Room”. With help from Quelle Chris, Sean takes it back to the old school on “Latoya Jackson”. The beat for this one is very interesting, as though Small Professor gave the J. Dilla sample chop to one of Doug E. Fresh’s beatboxing sessions. On “Midnight Rounds”, guest rapper Elucid stands out the most as he eerily has both a similar vocal styling and delivery to those of Immortal Technique. The beat sounds like it samples the score of a 1970s animated series in certain parts.

If the album has anything that could be considered filler, then look no further to the album break entitled “P’s Theme (Interlude)”. Mind you, it’s anything except “filler”, but it’s easy to perceive it as such due to its length, album order placement, and that fact that the word “interlude” is included in the title. In it, Small Professor creates a menacing beat which would be suitable to Sean’s raps IF his vocals were laid down over it. The original grimy “John Gotti” has the makings of a Random Axe reunion since Guilty Simpson lays down a verse, but it’s Your Old Droog who spits the best verse on the song. The posse cut format continues on “Think About It”, in which Small Professor provides an ominous nightmarish beat for the emcees, including Illa Ghee and Rock from Heltah Skeltah. Between him and Sean, Rock has always been the understated emcee of Heltah Skeltah. Though he isn’t as prolific as P was, the Rockness Monstah more than holds his own on the mic: “I guess it just ain’t in your Guess jeans, you get left, bitch / That’s just it, niggas gettin’ too big for they britches, snitches /Stitches ain’t gettin’ the snitches, need ditches up in ’em”.

In perhaps a call-back to Sean’s final pre-humous album, “Word to Mother” is sprinkled with vocal samples from Mike Tyson himself. Most of those samples are from a Comedy Central Roast in which Tyson parodied his infamous post-fight rant from his 2000 bout against Lou Savarese. This inclusion also coincides with Sean’s own sense of humor, which always had a good helping of self-deprecation. The album gets rounded out by some stellar remixes. The first of which is Small Professor’s “Philly Blunt Remix” of “John Gotti”. Though Sean’s original verse remains intact, Philly rappers Reef the Lost Cauze, Zilla Rocca, and Brooklyn-born Philly-transplant Curly Castro come thru and beat the beat up with their respective skills. Of all of them, it’s Zilla Rocca (handling the last verse) who comes the most correct:

Lastly, “Refrigerator P” is given the “Peaky Blinders Remix” treatment, which is appropriate considering it features fellow lyrical pugilist, Ireland’s own Rob Kelly. Combining a deep bass groove with some hard snares, Mr. Kelly delivers verbal assaults like “I’ll get you sleep for a cheeky fiver / creep behind you, razor in your heart like Peaky Blinders” that should not be taken lightly when he’s on the mic. In closing, I have to say that “’86 Witness” is one of the best hip-hop albums I’ve heard in 2019, and we’re still only in its first quarter. I’ve said before that while Sean Price may be dead, but his presence lives on. This posthumous album follows the tried-&-true formula of “one emcee, one producer” and will succeed with stalwart loyalists of both Sean Price and hip-hop.