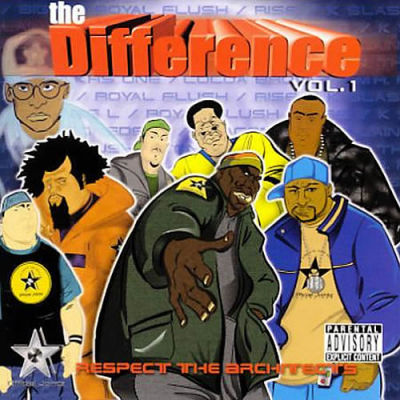 Labels trying to gain notoriety through star-studded compilations are nothing new. In fact, for “The Difference Vol. 1” Official Jointz Recordings out of New York have hired a man that’s an expert in the field. In 1999, producer Domingo did the same thing for Steve Salem’s Honcho Mogul Industries with “Behind the Doors of the 13th Floor”, and in 2000 and 2001, he was (assisted by DJ Rob) the lead producer for Yosumi Records’ “Game Over” series. It is probably no coincidence that some of the names from these previous projects pop up here as well: KRS-One, Craig Mack, Deacon The Villain, Tonedeff, Cocoa Brovaz, Ruck from Heltah Skeltah, Punchline & Wordsworth, Royal Flush. The majority of them are waiting to get their career in gear (again). Others, such as Dilated Peoples and High & Mighty, have theirs in full swing but still take up the opportunity that Official Jointz pledges to offer: “letting the artist express their own styles without record company interference.”

But don’t expect anything different from what Dilated and The High & Mighty usually deliver. Babu laces “Certified Official” with his cuts, while Iriscience and Evidence tag-team over Domingo’s horn-ladden track. High & Mighty’s verbal pugilist Mr. Eon works the orchestral bump of “Rumble”. Fans of these groups will not be disappointed.

The fans of Heltah Skeltah, however, have to get used to the break-up of their darlings. Freed from the dominant deep growls of his former partner Rock, Ruck AKA Sean Price follows up the string of his solo missions. Surprisingly, he fares rather well. In direct comparison to Eon, who has a reputation for dropping nasty disses, Sean P seems much more of a threat. “Irrationally Speaking” is as merciless as battle rhyming gets, from “Aiyo I thought… who the fuck told you to think, jerk? / you funny-style bitch nigga rockin’ a pink shirt” to “Sean Price put a cock in the throat / playin’ Aaliyah’s song, rocking the boat.” What makes this contribution especially tasty is the looney singing in the chorus (featuring Illstar).

The fun continues as K-Slash comes up with some nice lines (“I’m gettin’ more ice and cream than Bryer’s / makin’ rappers carry more stress pills than Mariah’s”) over a funked out joint called “Blow It Up Shut It Down”, again elevated by a crazed out chorus (featuring Mr. P.R.). Following the lead, KRS-One and Tonedeff do the singing themselves on “Clear ’em Out”. Fueled by his current disagreement with Nelly, KRS once more fights for his props. “I am the incarnation of what you do / when you try to forget Kris, I try to forget you.” Obviously, he can’t. The fact that he doesn’t mention anybody’s name this time, shows that he merely uses Nelly as an example of what he thinks is wrong with hip-hop today. As a further consolation that KRS is not completely ego-tripping serves the presence of Tonedeff, who really should have this uptempo track all to himself the way he tongue-twists his way through it.

At this point, “The Difference Vol. 1” is a pretty hot compilation full of exclusives, featuring hot rhymes and hot beats. But halfway through it starts to fall apart. Despite claiming otherwise in “From the Child to the MC”, Rise is still stuck somewhere between the ‘child’ and the ‘MC’. Clever lyrics, yet a more mature musical background might have made him appear more grown up. “Play No Games” by the Cocoa Brovaz is dragged down by some no-name guest appearances (Mr. Yuk, Animal Cub) and a lagging beat. Craig Mack tries to resurrect his “funk flav” on “The Ha Ha Ha”, but doesn’t quite succeed. Deacon The Villain’s self-produced “Watch Yo Mouth” is hardly worthy of mention while you’d wish Royal Flush and Ma Baker would leave Big L and Kool G Rap alone on “Double Up”. As closely related as these two may be, their chemistry isn’t as tight as when Punch & Words get together, whose “Native New Yorker” is about the only song on here of lasting value.

Musically, Domingo Padilla has experienced his ups and downs. From seemingly being the next big thing when he dropped bombs over the Bronx such as Big Pun’s “The Dream Shatterer”, KRS-One’s “The MC”, Main One’s “El Gran Combo” or Fat Joe’s “Success” in the mid-90s, to being confined to compilations that came and went almost unnoticed. Despite the fact that Domingo’s drum programming is still unimaginative (which has always been his weak point), this is clearly his best work to date. With volumes 2 and 3 already announced, Official Jointz might indeed make a difference with “The Difference” in the long run.