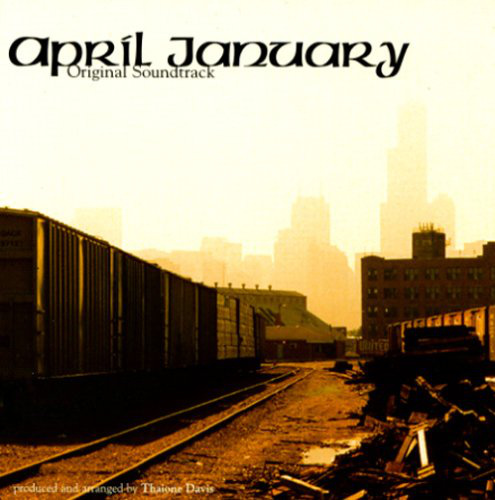 Some producers don’t have to say a word to get their message across. Even though he doubles as an MC, Thaione Davis’ more vocal half stayed on his last record and “April-January” moves forward without his “voice”. An interesting thing happens when an album is nearly void of any kind of verbalization; the music has to speak for itself. There are no MC’s to guide the listener through these songs, there’s no one telling us what mind-frame to have, and if you’ve never heard Thaione’s voice or lyrics, then you’re left with a variation of instruments and musical notes to decipher just exactly what type of person you’re listening to. With nothing but a few sparingly used samples and sound bytes from meteorologists, the music is the only thing left to tell the story.

On the first full track “Prelude,” there are a few telling signs as to just who you’re listening to. The intricate percussion is a pot luck of congas, hi-hats, kicks, and snares that gyrate above the looming bass line. The end result is a soothing tribal statement that reveals Davis’s connection to the roots of his art. A helpful weather lady also reveals an important geographic clue midway through the song: “right now in the mid-30’s across Chicago.” Cool indeed.

“Mandolin Theatre” features the same type of percussion except this time with a more definitive pulse. The strings borrow the same melody used on Common Sense’s “I Used to Love H.E.R.” and take it up a notch. The song gives off a slight Asian vibe but the snares pound hard enough to remind you it’s still hip-hop.

As the record progresses, it’s clear that this is a man of many inspirations. A chunk of Chicago jazz is broken off into the slick “29 February,” and the sound is a common theme throughout the album. “Snowblind (doubting Thomas)” pairs Italian guitar plucks with a lazy saxophone that produces a surprisingly tight combination. “Sierra Leone” conjures up a vision of Shaft strutting down a street, as the vibrating soul is cool and forces your foot to bounce along with it.

“The January Poem” is one of the highlights of the album. It begins with Lauryn Hill’s Fugee-era quote “Season’s change mad things rearrange.” Easily one of his most progressive songs, the entrancing mellow sounds pull you in and the track slowly builds intensity throughout. It never fully explodes but as you would recognize from the rest of his album, Thaione is too much in control of his music to let something like that happen.

“April-January” is throbbing with life and soul and it doesn’t let up for one song. His laid-back, Windy City style creates atmospheric soundscapes that drift but keep your attention. With a little bit of exposure, this album could climb up to the ranks of such instrumental albums as RJD2’s “Since We Last Spoke” or Blockhead’s “Music by Cavelight,” and for an album with no words, that’s saying a lot.