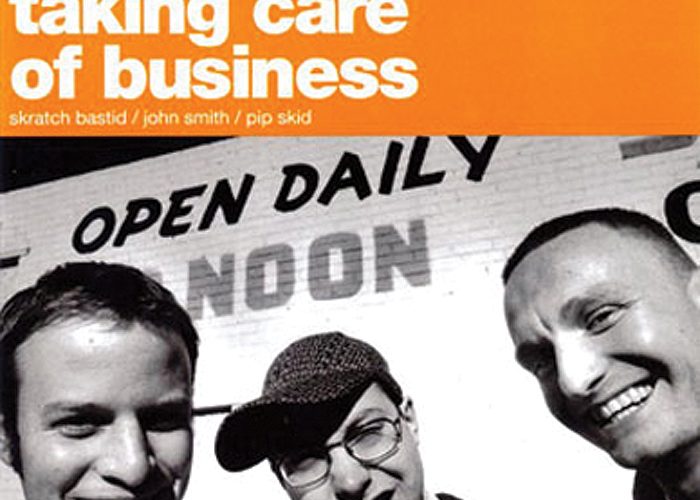 With more and more Canadian hip-hop being produced and marketed towards worldwide crowds it has become increasingly difficult to sort out what’s good and what isn’t. Popularity in Canada doesn’t necessarily translate to good hip-hop overall. Skratch Bastid, John Smith, and Pip Skid have individually collected their fair share of accolades and fans in their home-country. As a battle DJ, Skratch Bastid has made a name for himself at various competitions and has slowly emerged as a producer. John Smith and Pip Skid have also gained a large fan base through their efforts with the Peanuts and Corn rap crew. While this combination of emcees and producer could be a considered a super-group of sorts in Canada, the music they produce on “Taking Care of Business” fails to live up to the hype. It’s not a bad CD at all, with good production and decent representation behind the mic, but overall the effort from the group is just an average release.

Behind the boards, Skratch Bastid handles most of the production and scratching and does a good job. The intro’s triumphant horns, along with a dope series of scratches, sets the album’s tone very well. The lead single, “I Ain’t Lazy,” takes a more upbeat and jazzier approach, with a dope M.O.P. sample scratched into the hook. Bastid’s effort on “Get Nice” is adequate though a bit simplistic. Bastid does so-so work with decent samples on “Collecting Empties” and “Lay Awake.” Jo-Run shows up for “Entertainers,” which is a another decent track, with an interesting use of different samples to set up the track’s hook. The rest of the album seems to follow the trend set by the first few tracks. All the tracks are good, but not exceptional. Very few tracks stand out enough to really catch a listener’s attention or warrant mention. The use of strings on “I Run Winnipeg” is outstanding, making for a great track musically. “Non-Stop” features a simple beat but is noteworthy due to an ill Devin The Dude sample. “Ebb and Flow” is an interesting track due to the use of the slow and dragging samples over an upbeat drum pattern. The album ends with a Gordski mix of “I Ain’t Lazy” which pales in comparison the original.

The emcees behind the mic also fail to provide anything exceptional. John Smith and Pip Skid are good emcees with decent, but straight forward flows. Lyrically, the duo doesn’t impress with it’s battle-oriented rhymes. On “I Ain’t Lazy” John Smith spits:

“I’ve played more shows than most attended
I make my dough then go and spend it
I earn my title, quasi-famous
Pseudo-celebrity, yo it’s Johnny ain’t it?
[…]
I ain’t trying to get thrown in a can like Pepsi
Sort of like dead prez, dying, trying to get debt free
Next video, dope fitted on, waterguns, and jet skis
I need a vacation man
cuz I’m a bookie, owner, janitor, and roadie
The vinylist spends his days in the lab
good looking rapper even though he’s tall, beard, and short sleeves”

These lyrics are as good as it gets and the norm for the entire album. It’s not bad, but it does nothing to distinguish Smith or Skid as emcees. Conceptually, the duo also fails to do much new, sticking to basic battle raps about their struggles and career as rappers. Pip Skid’s persona of “Big Barry Banks” on “I Run Winnipeg” is interesting but not enough to elevate the album from its average lyrical status.

“Taking Care of Business” does its job well enough to not get fired, but fails to earn any promotion or accolades. Skratch Bastid show’s signs of brilliance on tracks like ” I Ain’t Lazy” and “Ebb and Flow,” but otherwise he only provides filler material for most of the tracks. John Smith and Pip Skid do well enough on the mic, but are only average emcees. The album is good if you’re looking for your basic underground hip-hop. The simple sampled beats and straight-forward lyrics are good for a listen or two, but won’t garner much replay value outside of a few tracks.