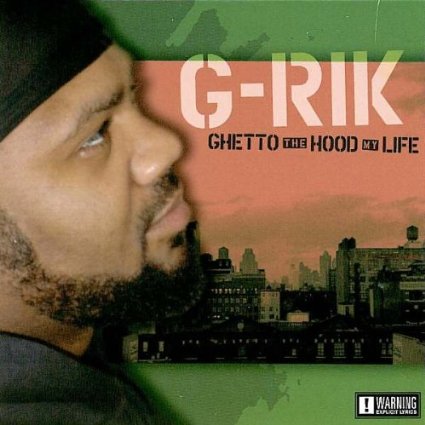 G-Rik :: Ghetto The Hood My Life

An artist such as G-Rik is the ultimate example of the success that southern hotbeds have reached in rap music. He is not necessarily the next big thing, the new act that has been pre-labeled for constant radio rotation. Because of the expanse of the music scene in Houston, though, he has been able to claim his place without needing to be snatched up by a massive major. Scattered moments of radio play and a growing overseas audience have ensured that G-Rik climbs the ladder the old-fashioned way, and his debut “Ghetto The Hood My Life” is his first step on the path.

The end result of this record is approximately what one might expect. This is both good and bad. A few decent club songs appear, signaling that G-Rik is already prepared for potential commercial growth. The requisite “love” songs and gangsta posturing are in full effect as well. G-Rik is not the most memorable voice and he is not too musically ambitious, so he struggles to create his own voice amongst so many others exploring such artificial topics. There are a few bits of inspiration that remind us that G-Rik is not just another rapper trying to get paid, but these are scarce.

The intro carries with it the requisite cinematic classical strings, and G-Rik talks shit for a minute or two, as well as gunning for street cred by enlightening us to his living situation. “Revenge” follows with a nice, slightly bouncy beat, and G-Rik does his best to work his storytelling skills. His rhymes remain too accessible, though, because there is a distinct lack of specific detail, something absolutely necessary for a story. The end result is that “Revenge” feels like a club song, but it strikes an uncomfortable and unsuccessful balance between catchiness and integrity. Additionally, the production quickly ventures into repetitive territory, mimicking the incessant hook. Variation is necessary, even within a song, and the chorus and music are both grating after a while.

Unfortunately, this first song is an anomaly in terms of subject matter. G-Rik shies away from trying anything new, and hardly a phrase is uttered that hasn’t been heard before. I’ll let the hook of “Heavy Haulers” explain the pervading themes of the record:

“We got gangstas, we got ballers
We got hustlas and shot callers
We got big ol’ SUVs with big wheels
And that’s why they call us heavy haulers”

Got it? The beat for this particular track isn’t exactly a barnburner either, a clinky little affair with no variation and no outstanding qualities. Rik has a suitable voice, but most of his rhymes on “Heavy Haulers” are rife with clichÃ©s, laden with claims that exist only to generally reinforce the character he is pushing at us. “Snitch,” the lead video, is likely being pushed because of a heavier, more pronounced loop, but the same simplistic drum pattering exists. This time, instead of simply talking shit, he talks shit to a perceived narc, which I guess is supposed to be different. Again, since he gives no details, the rhymes are empty and only vaguely threatening.

“Tha 409′” is the requisite regional anthem, but an intelligently crafted head-nodder gives G-Rik’s rhymes room to breathe. This time, a much better hook is part of the package, and if “Ghetto The Hood My Life” produces a hit, this will probably be it. The track is not especially unique, but it manages to be catchy without being corny. “Tha 409′” is definitely not worth the price of admission, but it is one of the lone bright spots. On every other song, his beatmaking skills are suspect, not because of poor mixing but because he isn’t willing to switch up his already trite formula.

“Gangsta Party” is difficult to listen to because of the overly smooth beat and a hook that croons “we’re having a gangsta party, we’re having a fuck party.” Because of the low-key tone of the beat, however, G-Rik is able to jump to the forefront with his vocals, which are surprisingly inspired. He crows at the top of his lungs, quite convincingly, and this newfound energy is a blessing. The subject matter is still stuck on sexual braggadocio, but he shows more potential here than anywhere else.

A couple of songs towards the end showcase Rik’s potentially potent storytelling ability, despite their ultimate lack of compelling material. “Friday” and “Gangsta Love Story” are not laced with interesting production, but Rik’s creativity shows through after many minutes of labor. His descriptions of his love life are fuzzy and fairly average, but he is actually trying to separate himself from other rappers and that is the important part. There is so much material here that could have come from anyone’s mouth, so it’s nice to see him rapping for a distinct purpose. More of this would have made this a much finer, more focused album.

Through all of the usual bragging and assembly line beats, G-Rik is compelling on occasion, and when he steps away from his bland rhymes and club-hopping action there is actually something to be heard. None of the production is above average in any respect, so for the next installment he might want to recruit some help for the boards. G-Rik claims that “most niggas do a lot of talking but I’m all heart,” and I want to believe him, but there is not enough evidence that he is willing to do more than just talk about the usual subjects. There is a flash of this heart here and there, whether it is in a little anecdote or a more forceful delivery, but most of his rhymes can’t distance him from the pack at all. We don’t hear about his life so much as the prototypical one, which defeats the purpose of making an album.