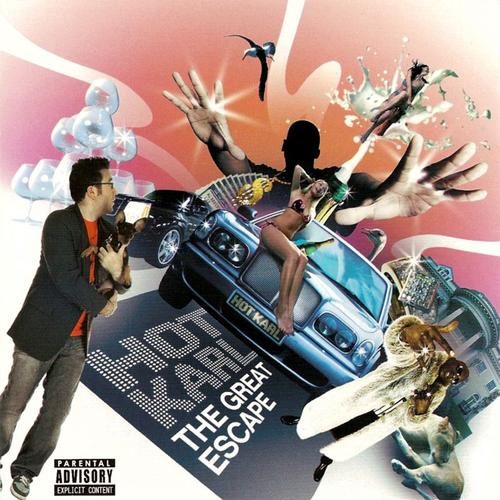 I really, really hate press releases. More often than not, press releases are masturbatory, self-indulgent affairs that attempt to liken the promoted emcee to any number of illustrious names (“Tupac” and “Notorious BIG” being the requisite namedrops), lengthy exercises in comic relief that serve absolutely no purpose other than the appeasement of the artist’s insatiable ego. Thankfully, Hot Karl’s publicist avoided such shameless self-promotion, though all the honest, charming prose presented in Hot Karl’s press bio was undermined and defeated by a bright pink header: “A White Rapper Who Acts White?” The heck is that supposed to mean? Call me a politically correct stickler, but I am inclined to dock points for such a misinformed proclamation.

Yet, perusing the rambling liner notes (Karl provides candid personal insights on each and every track here, a very nice, though impossibly verbose touch), I can’t help but feel charmed by Karl’s disarming frankness and overwhelming enthusiasm for hip-hop culture, his unapologetically goofy narratives radiating a boyish purity that remains untainted by the posturing and pretension of today’s rap. While I can certainly applaud Karl’s ingÃ©nue, however, in many senses Karl is absolutely as gung-ho about making sure the listener knows he’s from the suburbs as The Game is about flaunting his hood credibility. Often, I get the impression that Headless Heroes is vehemently intent on marketing Hot Karl as the rap anti-hero, the suburban antithesis to today’s breed of superhuman Ã¼ber-gangstas. Throughout the record, we are confronted with a string of rather obnoxious skits, where Karl indirectly asserts his anti-bling ideology through poorly-executed, trite parody. These skits are, predictably, presented as run-ins with industry folk and business-minded friends who urge Karl to conform to industry standards, only for Karl to stick to his â€˜’I’m going to keep it real” guns. Do we really need more of this self-indulgent altruism? One would think that if Hot Karl’s material was honest, it would speak for itself, and not require extensive advertising schtick and blatant skits to get the point across. How Headless Heroes figured Karl’s continual ” I rep the suburbs, yo!” pronouncements are any less culpable than 50’s Tony Montana impressions is beyond me.

Thankfully, Hot Karl redeems himself with a handful of engaging material here. “Let’s Talk” is a throbbing, aggressive duel between Karl and MC Serch, an abrasive exchange between rapper (Karl) and A&R (Serch) that eclipses the stale concept of the track with some highly vigorous, spirited performances from both emcees. “Kerk Gybson” boasts an unapologetically cornball synth-pop beat that perfectly complements Karl’s teary-eyed ode to his gloriously geeky childhood, “Butterface” is a raunchy lampoon of “Badunkadunk” and “(I See) Booty”, Karl and Ali Abnormal spewing irreverent J-Zone-flavored filth about nubile, but gruesomely-featured females. There is a very relatable accessibility and honesty to Hot Karl’s work, and while his lowbrow, offbeat humor may prove a bit obnoxious to some, the caricatures he sketches throughout the record undoubtedly have surfaced in our own lives. This accessibility ensures that Karl is grounded entirely in a tangible reality, instead of residing in the Cristal-drenched dreamscapes of Rap City. As such, while I have several substantial gripes about Karl’s artistic approach (what’s with the Eminem meets Louis Logic nasal whine that dominates the record?), I can’t help but applaud his impassioned fervor and unashamedly audacious insights.

For all its shortcomings, “The Great Escape” remains a heartrendingly honest slab of unpretentious fun. I’m still wholly unconvinced by the staunch, tongue-in-cheek anti-hero posturing, particularly since it’s been done MUCH better by the likes of Louis Logic, Devin The Dude and J-Zone, but for what it is, “The Great Escape” is an enjoyable affair spawned from admirably genuine convictions.