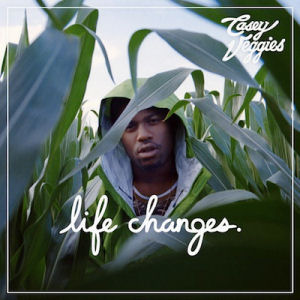 It has to be a bitch to be Casey Veggies when half of the time people want to talk about how you USED to be in theOdd Future crew. Let’s just put a nail in that coffin right now – he collaborated with them on their first release “The Odd Future Tape” and then branched out to do his own thing. No animosity, no ill-will, no shit went down – Veggies himself has described it this way: “I just had more of a vision for my own rap career. I wanted to do my own thing.”

To that end Casey Veggies has his own website, his own apparel lineand a slew of self-released mixtapes over the last five years. “Life Changes” is the latest evolution of Veggies, a cohesive 13 song album showcasing both his personal and musical vision of hip-hop. Production comes from a wide variety of sources thoughout – The Futuristiks, Harry Fraud, Rob Holladay and Dom Kennedy just to name a few. Though technically anything you can download from DatPiff is a “free mixtape,” this has a totally different feel from the average freebie. Take the soulful piano melody of Dynamic Duo on “Young Winners” for example, and peep Veggies flow:

“I’m poppin, we on
She playin, my songs
I prefer to just get the dome
on the backside cause I like that position
Real young boy with a king intuition
Hard like a nigga in prison
French fries sent to my chrissy
Ride through the city with a sexy young thing and she part of the committee
Girl let’s get down to the itty gritty
If you ain’t wanna flirt then cover your titties
Says she want a boss, want someone like Diddy
Ain’t +Making a Band+ just made a hundred grand”

“Slick” is the best word to describe “Life Changes.” Every song is professionally mastered and creates an atmospheric surrounding in your speakers or headphones. Vocal production changes in tracks like “Love = Hate, Ulterior Motives” emphasize this point – changing Veggies voice from an echoing studio to a subterranean cavern to match the change in the musical backdrop. Veggies has the artistic sense to not take himself overly seriously, letting himself sing-along with his background vocals on “These Days” and professing “As long as my fam straight, everything still okay/My favorite rapper’s Kanye, she told me hers the same thing.” Just admitting you’re a fan of someone other than yourself is an ego blow to most emcees, but Veggies has a secure and self-confident flow. He reminds me of a young Common merged with a young Ice-T in terms of his intellect and swag, but his flow does at times echo Mr. West.

Clocking in at nearly an hour, “Life Changes” is one of those albums you might feel a twinge of guilt about not having shelled out $14.99 for even though they gave it away for free. “Most of these rap niggaz be straight +Rhyme & Reason+/I be swaggin my shit hotter than Top Ramen even” brags Veggies on “Whip It,” but he may be even hotter than a steaming bowl of pot noodles. He’s got that “next thing” feel so many rappers strive for and so few actually have, and the thing other rappers should glean from Veggies is that he doesn’t try to force it – his swag comes natural.