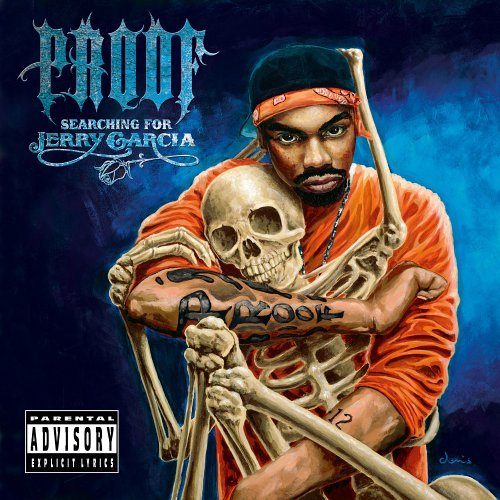 98.3% of the people reading this review don’t need to have Proof’s “Searching for Jerry Garcia” album title explained to them. They know Jerry is not Proof’s long lost cousin, and/or don’t mistake the name for a reference to a popular flavor of Ben & Jerry’s ice cream. For that other 1.7%, the artwork adorning the cover of this D12 rapper’s album should be a hint. Proof is hugging a skeleton, and it’s not because he’s a morbid motherfucker or a big Cypress Hill fan. Actually he may be both, but the truth of the matter is that Jerry Garcia was the lead singer for the cult rock phenomenon known as the Grateful Dead – emphasis on the was. Jerry’s soul left the earthly realm on August 9th, 1995 although some would say he had long since travelled on planes few of us could ever conceive well beyond death. While his best known habit was heroin, both the music and the cult of “Deadheads” who followed his band religiously became much more infamous for their acid trips. We at RapReviews don’t endorse the use of illicit pharmaceuticals but let’s face it – your favorite rapper and your favorite rapper’s favorite rapper probably all smoke weed to begin with. Some of the more adventurous like Tame One and Cage openly advocate taking it to the next level with everything from hasish to blunts dipped in formaldehyde. Bottom line – if Proof is “Searching for Jerry Garcia” it’s not because he wants to dig up his bones, it’s because he really wants to get stoned. While fellow D12 member Bizarre advocates his sex drugs rock’n’roll lifestyle in an over the top in-your-face manner, Proof is opting for something a little more sublime. In fact you wouldn’t even know the gruff voiced rapper has anything on his mind but getting people to groove on his opening song “Clap Wit Me”:

“+8 Mile+ was dope, Obie brought heat
Emile on the beat 50 kept us in the street
It’s my destiny to be, the truth nevertheless
Nothin new your boy Proof is better than best
Elliot Ness to these fuckin gangsters and killers
Bankin they millions they all wanksters and squealers
My first spit with the Tony Toca
D-Tweezy ‘Ride to Death’ is our only slogan
Dreams of fuckin J-Lo, Hood is on the payroll
Lockland and 3rd Precinct screamin ‘Free Yayo’
If the beef is set let’s squeeze off a tec
And with my last breath still screamin I-F, clap wit me”

Light and jazzy, the song might be the opposite of what you’d expect if you only know Proof as the most underrated hardcore trash talker in all of D12. On the d-low Proof has been doing his own thing for years though, and has the underground albums to attest to it. There’s more to Proof than meets the eye. If you take a journey with him through “Forgive Me” featuring 50 Cent you see how his life has been a search for serenity all along, struggling to overcome a troubled past:

“Barely raised by my dysfunctional fam
Here I stand as a dysfunctional man
Quick-tempered, short-fused, and pissed at God
Demons pullin at my soul ’til it’s ripped apart
Secret’s out momma that fire I started it
Fuck the fireman logic of the closet by the wire shit
What’s positive about a father that bust nuts
that washed up, in a momma that don’t show her son enough love
Shit, that’s why I run from my first son
And force these chickenhead bitches to get abortions
I’m married to game, my mistress is fame
My girl Paq the closest, she know I ain’t gon’ change
Go insane in a world evil as ours”

Eminem may have the fame and Bizarre the notoriety, but if you’re paying close attention Proof is the truth. The only thing stopping Proof from reaching a higher level of acclaim thus far has been his inability to get the right beats and national distribution, and this time around he has both. “High Rollers” is produced by and features B-Real (so maybe Proof is a not-so-closeted Cypress Hill fan after all) along with Method Man. Fredwreck funks out “Pimplikeness” and the D12 fam come to make cameos. “Ali” takes things from Detroit to Flint with the Michigan O.G. MC Breed on the track, over a simple but effective Essman beat. The underutilized Ski laces “Jump Biatch,” Salam Wreck handles the triple skipping “M.A.D.” and Dirty Bird laces up “Sammy Da Bull” featuring Nate Dogg and Swifty McVay. From the opener to the closer the music comes correct, with the final track “Kurt Kobain” ending things on a deeply somber note:

“I put my soul through the ink; bless a pad with thoughts
Add my thoughts before I grow extinct
My backbone disowned my zone Why roam? Called home – from now on I’m all alone
Just Proof, no shine, no friends just fans
No wonder my hands, tight where the internet ends
I take back most of the flack
The stress smokes press me close to the crack
Like my pops, the ghost of my past
Found in mud, JD and Stucky
Lately I’m lucky, I don’t hate me to touch me
Maybe I’m ugly inside, but smilin to make it
I love y’all dawg, and that’s however you take it”

At two polar ends of the D12 spectrum are Proof and Bizarre. On the latter’s “Hannicap Circus” he tries to win you over by being nuttier than a fruitcake, and thanks to dope beats and purposefully doped up raps he succeeds. Proof wins for the exact opposite reasons – he’s serious as cancer about his craft and pouring his heart and soul into it to make you a believer. Once again dope beats make the words come off the page and transmute intentions and concepts into song. The one advantage Proof may have over Bizarre is that even though he’s a serious dude, there are enough mellow songs on “Searching for Jerry Garcia” that you can believe he’ll unwind now and then, even if it takes a little pharmaceutical help to relax. Bizarre on the other hand rarely if ever proves he’s meant to be taken seriously. While Bizarre’s album may get more mainstream exposure, this reviewer humbly recommends getting both to get the full yin and yang of the D12 experience, a group of talented rappers who are finally starting to emerge from Marshall Mathers’ long shadow.