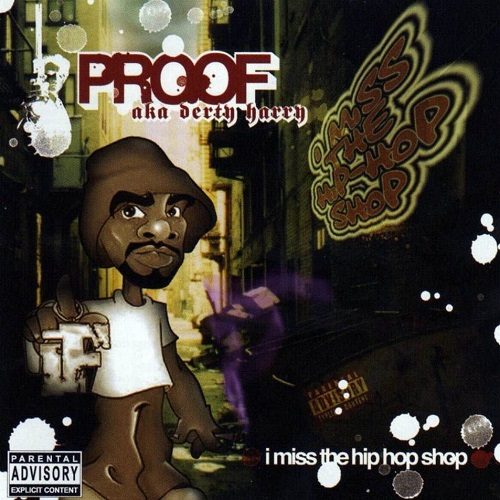 That’s really nothing new for Deshaun Holton. While the average consumer may think of Proof as one of Eminem’s homies, this Detroit rap heavyweight has been sick with rhymes for years. He’s been an “Unsigned Hype” winner in The Source, was a contestant in the 2000 “Blaze Battle” on HBO, and generally has held it down in the underground for years. While he’s reputed to be working on an album inspired by Jerry Garcia (see his website for more details) his current release “I Miss the Hip Hop Shop” is instead dedicated to the battlegrounds where Detroit’s finest made a name for themselves; a spot that was portrayed fictionally as “The Shelter” in Eminem’s movie “8 Mile.”

Not surprisingly, some of Proof’s raps on this album are devoted to events in/around the Detroit scene that many rap fans nationwise might not be familiar with. On “E and 1 Equel None” Proof is taking potshots at Esham, a gothic/horrorcore rapper from the D who has a huge following locally and a cult fanbase worldwide. Even if he hasn’t mentioned him by name it wouldn’t be hard to tell due to the fact that Esham’s last album was released by Psycopathic Records. Let Proof tell you about it:

“Do you muh’fucker and I’ll be me
I can’t believe the devil signed up with ICP
If, that’s your move I respect it, ain’t no frontin
Just know that nuttin from nuttin leaves nuttin
Muh’fucker, that’s it!
[…]
Do it like this, acronym for your name, E-S-H-A-M
Every Sucker Has A Moment”

If you came in to this album with expectations that it would be a D12 side project, or feature tons of cameos from the group members (particularly Em himself) you’ll be hella surprised. That’s not to say Proof doesn’t show love to his boys, or that Denaun Porter (Kon Artis) doesn’t produce a track, “You Know How 2.” Actually the track is the same beat as “Stunt 101” by the G-Unit, but give credit where it’s due since he did the original, and Proof’s revision of it is funny and fresh. In fact this album comes across as more of a Proof mixtape, except instead of being bootleg he went legit and licensed all the beats to release it commercially. For example if you get excited seeing DJ Premier’s name on “Play With Myself” you should know the beat is actually lifted from Jeru the Damaja’s song “Ya Playin’ Yaself.” Nonetheless Proof creates some good shit from it, turning a righteous hip-hop anthem into a funny porn rap:

Three of the album’s original beats are produced by Cyzer Soset, and they are among the best “Hip Hop Shop” tracks Proof raps on. “Derty Harry” is a semi-autobiographical track where Proof says, “Of course I was the best in the lunchroom/don’t make me get up out my seat bitch and punch you” and brags “I’m so dope nigga, even bite myself!” The aptly named “Neil Armstrong” sounds like a beat that flew in straight from outer space, the kind of track Kool Keith and compadres would be comfortable rapping over. “Shake Dat Donkey” features some other rappers besides Proof, but that won’t stop you from cranking the volume up to hear the thumping bass. Proof should continue to work with Cyzer in the future, as they make a good combination.

“I Miss the Hip-Hop Shop” is a good album on the whole, albiet something of a mixed bag. The expectations from D12 fans might be a little too high going in, so if you revise them and think of Proof as just being his own man it comes across fresher as a result. He’s always been the gravelly voiced, underrated member of the D12 crew, but this album may serve to change some perceptions. Proof (no pun intended) proves on this album that he can stand well enough on his own two feet, without a crew to hold him down. With more original beats and a few hot cameos, there’s no limit to what Proof can do.