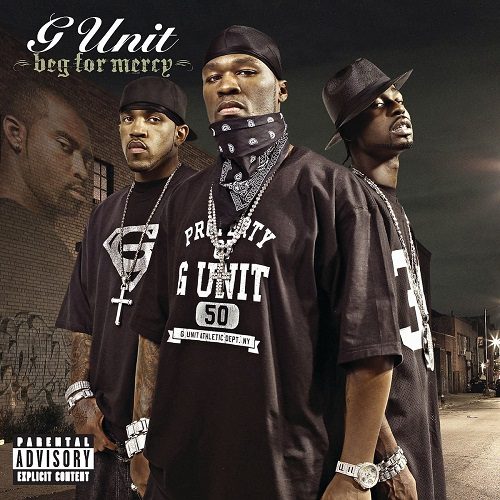 It’s a testament to the cultural bond of hip-hop that rappers who “get on” with major deals feel obliged to make those opportunities available for others using whatever power and influence they have. EPMD opened the door for Redman. Digital Underground cleared the way for 2Pac. Ice Cube gave us Mack 10. And in recent history, Eminem kicked the doors open for 50 Cent. While it’s true that 50 was already a known name in hip-hop (famous AND infamously) he wasn’t getting any breaks after his falling out with Columbia, not to mention his near-fatal shooting, put a black mark next to his name with every major as “dangerous” and “damaged goods” to boot. Eminem took a chance by signing him to a big deal on Shady Records though, and the rest is history.

Now 50 is making room in the crowded hip-hop market for some artists he feels deserve that same shot. They go by the names of Lloyd Banks, Young Buck, and Tony Yayo – collectively with 50 Cent known as the G-G-G-G-Unit! 50 has gone out of his way to not only mention the crew at every opportunity, but to make it known that they’re ANNOINTED – his chosen group to bring heat to the rap game. With the foreboding title “Beg for Mercy,” the G-Unit crew attempts even before you purchase the album to put out a message: other rappers better run and hide, cause the next generation has arrived.

One advantage to rolling with the hottest rapper of the minute in the hip-hop scene is that you get access to producers who otherwise might not give some up-and-comer MC’s the time of day. The proof in the pudding starts right in the flavor of the introductory “G-Unit” track, given an ominously heavy beat by producer extrordinaire Hi-Tek. As if that wasn’t enough, Dr. Dre and Scott Storch work together on the next joint “Poppin’ Them Thangs” – a smooth mix of Storch’s cool keyboards and Dre’s hot G-Funk sound. There’s more heat to be found throughout: “I’m So Hood” by DJ Twinz, the blaxploitative “Footprints” by Nottz, Hi-Tek again on “Eye for Eye,” No I.D. on the sultry “Smile,” and even Sam Sneed on the pimped out Tony Yayo album closer “I Smell Pussy”:

“When I first met her, I did anything to get her
Paid all her bills and filled her ‘frigerator
Reminiscing on late nights when I tried to lay up
But couldn’t get off cause your baby would stay up
She even crashed the whip tryin to switch in the third lane
That’s when I realized this bitch was a bird brain
A pigeon writin her baby pops in the box in the prison
Sing-Sing is where he been
She in the Gucci tights and Fendi high heels
Baby wipes and cans of Enfamil
Motorbikes and grams of fish scale
So 9 to 5 niggaz was no frills
Turning young niggaz with principals to old men with debts
And all the prank calls was death threats
That bitch got the best sex, all across the globe
And the bitch head game was out of control”

Some of the lesser known producers on “Beg for Mercy” are packing just as much heat as the all-stars though. Thayod Ausar of Black Tantra makes a name for himself with the grimy melody, eerie harmonized singing, and deep bass hits of “My Buddy” – appropriate for a song where G-Unit’s best friends are gats. You “Betta Ask Somebody” about the Fusion Unlimited beat, because it sounds like some straight Dr. Dre “Chronic” shit. And let’s give it up to the the 7th EMP for sample “Brandenburg Concerto #1 in F Major (Allego Moderato) by Johann Sebastian Bach on “Salute U.” Freshest of all though might be Red Spyda’s work on “Wanna Get to Know You,” which borrows successfully from Marvin Gaye to create the closest thing a gun-toting crew like G-Unit might ever get to late night urban contemporary:

50 Cent: “Don’t know what fuck me up more, watchin her lick her lips
Or watchin her walk, she hypnotized me with her hips man
I sweet talk her if she like
Cause all she really want is a nigga to treat her right, right?
Look, I’m legit now, I used to break laws
Now you can reap the benefits of world tours
Big house, big Benz, girl it’s yours
Mink coats, Italian shoes, stones with no flaws
You ain’t got ta look like a model for me to adore you
All you got is love me and be loyal
Don’t indulge in my past, fuck what happened before you
Cause to me some bunny’s gon’ hate you that never saw you
C’mere, let me touch on you, I let you touch on me
Put my tongue on you, you put your tongue on me
Let me ride on you and you can ride on
We can do it all the night, we can have a baller night”

The members of the crew balance each other out nicely. Tony Yayo has the gravelly voice, but he’s a little higher pitched than the slippery slurry 50. Lloyd Banks is the sly one of the bunch, and Young Buck has the deep deep dirty dirty voice which betray his Southern roots but make him the ideal counterpart to this crew. In fact, he stands out so much on songs like “Stunt 101” it may not be long before he’s working on a solo album of his own:

“Chain so icy, you don’t have to like me
In a throwback jersey, with the throwback Nikes
I know you probably seen me with Cash Money from back in the days
The only thing changed is the numbers on the Range
I bought me an old school and blew out the brains
The ‘Roc the Mic’ tour, I threw off my chain
My Sprewell’s spinnin man, I’m doin my thang
And whodi now in trouble now that you in the game
Come on now, we all know gold is gettin old
The ice in my teeth keep the Cristal cold
G-Unit homey, actin like y’all don’t know
Look, I can’t even walk through the mall no mo’
I just pull up, get out, and get all the hoes
They never seen doors lift up on a car before
Don’t be mad at me dog, that’s all I know
Is how to show these Fugazis how it’s ‘posed to go”

Weak moments are for the most part few and far between, but few debut albums are ever perfect and “Beg for Mercy” is no exception. “Groupie Love” is remarkably average, and a bit distasteful in it’s casual misogyny. “Baby U Got” is a reminder that 50 should only sing in short bursts, and the title track is a dead-ringer for 50’s “Back Down” from “Get Rich or Die Tryin’.” On the whole though these gangsters show a strong presence in the rap game, in part due to their volume of mixtape work with 50 but also undoubtedly due to their hunger and desire to take advantage of the opportunity they got. While new groups typically don’t outshine their leader, the membership of G-Unit may indeed have lesser rappers begging for mercy, both in talent and chart position. They’ll be around for a while.