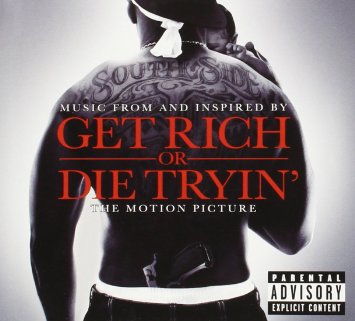 Curtis Jackson wields power like Julius Caesar. Both men are dynamic figures, beloved AND feared by the public, inclined towards great works and determined to cast a long shadow over history. Ruthless ambition informs the actions of such people. Money and power. First you get the money, then you have the power. It’s no accident that their own blood soaked their ascension to the top. Caesar’s fought his war in the lands of Gaul; the man most know best as 50 Cent fought his war in the streets of New York City. Violence is it’s own form of credibility. Appalling though it might be, the fact 50 Cent was shot so many times and lived gave the man an aura of being larger than life – he could survive anything. So too was it said of Julius Caesar – even though he could be outnumbered by his foes 10 to 1 in battle he always prevailed.

The movie “Get Rich or Die Tryin'” is the story of 50 Cent’s ascension to power; much like HBO’s “Rome” is the story of Caesar’s. Arguably Caesar wielded much more power as the supreme authority throughout the Roman Empire, but one should not take Curtis Jackson lightly either. He rose from the bottom to the top and now sits on a media empire that includes his own record label imprint with the power to sign established artists like Mobb Deep and M.O.P; he has a video game coming out named “Bulletproof” and now stars in his own motion picture about his life. If 50 Cent decided to wield that impressive media empire to political ends, who knows how far his ambition could take him? Move over Caesar. “Hustler’s Ambition” tells us exactly how far he wants to go:

“The women in my life bring confusion ‘n’ shit
So like Nino in +New Jack+, I holla ‘Cancel that bitch!’
Look at me, this is the life I chose
Niggaz around me so cold, man my heart done froze
I build an empire on the low, the NARC’s don’t know
I’m the weatherman – I take that cocoa leaf and make that snow
Sit back, watch it turn to dope, watch it go out the door
O after O, you know, homey
I’m just triple beam, dreamin; niggaz be, schemin
I fiend to live the good life, the fiends just fiendin
Conceal my weapon nice and easy so you can’t see
The penitentiary is definitely out the question for me”

B-Money’s track lays the foundation with a solid bassline and background vocals that harmonize to the flow but never distract from 50’s words. The word is definitely the key – 50’s skills as an orator helped him rise to his current station in life; much like Caesar himself was reputed to wield great influence through his carefully chosen and highly articulate speeches whether before a Roman Senate or his own armed forces. For much of the soundtrack to his movie 50 Cent speaks for himself, as he rightly should. His oratorical powers do not fail him in this cause. “What If” finds him pondering the things he could do over a Nick Speed beat with Bobby Womack samples; a song which also surprises as 50 makes new enemies: “If I put out bullshit joints like AZ/every chance niggaz get they’d try and play me.” Of course men who wield power have no problem making enemies, and 50’s obviously not afraid of war since he’s been shot before, but purposefully making an enemy of a man who is at least your equal as an orator is not necessarily wise. Other songs where 50 flows on his own include “We Both Think Alike,” the sing-song pop crossover “Window Shopper” that feels and sounds like a “Wanksta” sequel, the heavy Dr. Dre bass and piano of “Talk About Me” and his equally somber production for the closer “When it Rains it Pours.” And don’t forget about bonus tracks – Hi-Tek laces him for “Best Friend” and 50 duets with Young Buck on the Ron Browz laced “I’ll Whip Ya Head Boy.”

Such duets play a big role in the “Get Rich or Die Tryin’ Soundtrack,” as 50 is still on most of the songs even when he is not the sole star. The only songs that do not feature him in one way or another are “Don’t Need No Help” by Young Buck, “Get Low” and “Born Alone, Die Alone” by Lloyd Banks, and “Fake Love” by Tony Yayo. It’s no coincidence that all of these solo songs are from the G-Unit, nor that all of the other artists who share airtime on the album are recent G-Unit inductees. M.O.P. duet with 50 Cent on “When Death Becomes You” and Mobb Deep show up several times, including “Have a Party” with Nate Dogg. With a pounding Fredwreck bassline in the background and Nate’s crooning on the hook, “Have a Party” has the potential to be this soundtrack’s next big breakout hit. G-Unit heads would probably prefer Yayo’s “Fake Love” get over though, as K.O. gives an ominous twist to Roy Ayers’ “Everybody Loves the Sunshine” and Yayo provides the menacing lyrical muscle to go with it:

“50 got Yayo gettin all this cash
Now all these yes men wanna kiss my ass
But back in the street you ain’t help me re-up
Locked up I had court dates, you never showed up
What the fuck?! Tell me what you grinnin at nigga
If I get killed, my stash, you spendin that nigga
Some people want nuttin out of life
And some people want it all, let’s ball”

Ultimately the “Get Rich or Die Tryin’ Soundtrack” could be labelled a G-Unit album, although it’s more expansive than 2003’s “Beg for Mercy” in terms of it’s roster of talent. The one downfall of this soundtrack seems to be that in his lofty ambition to be both rapper and movie star Curtis Jackson may spread himself a little too thin. 14 out of 18 tracks on a soundtrack and a full length movie starring yourself is a lot to handle at one time. Caesar learned the hard way that when you take on too much power and try to do too much you can be fatally betrayed, often by the very men you trusted. Arguably The Game was never a full-fledged member of G-Unit, but it’s still telling that in the end the only thing the two have in common is their equal amounts of ambition to be superstars in every media realm. They may soon clash again and the bloodshed could be more real than verbal. G-Unit itself needs to watch they are not set up for a downfall, as Yayo is fresh out of prison and Young Buck may soon be going in. With so many problems to juggle and so much lust for money and power 50 Cent can offer little in the way of musical, lyrical or spiritual advancement here. If you already know and like 50 Cent there’s nothing on the “Get Rich or Die Tryin’ Soundtrack” to offend you, but if you were waiting for him to take it to the next level you may have to wait a while longer; either that or he may first suffer a tragic downfall that makes him the next in a long and sad line of hip-hop’s martyr figures. Et tu, haters?