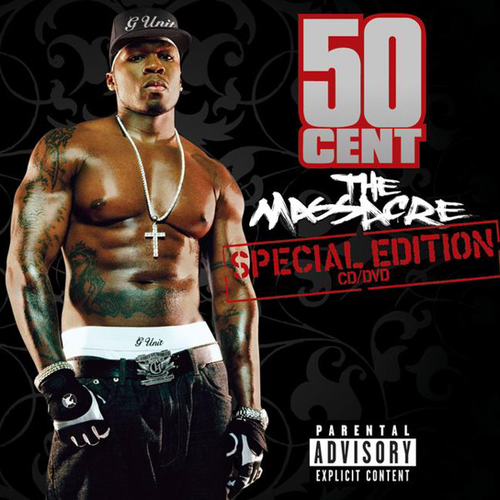 Hmm. It’s “The Massacre – Special Edition.” That must mean it’s even MORE special than 50 Cent’s “The Massacre,” an album many of us ran to the record store to get the day it dropped back in March. That’s been a pretty special album for 50 thus far – in excess of four million units sold according to the most recent The Massacre” the first time that they have little to no incentive to purchase it twice. After all it’s the same album with the same songs in the same order. What then makes this release so “Special” that it would cause someone trying to make a dollar out of 50 cents go out and buy it again?

Let’s run down the list of incentives. First there’s the cover art, which features a realistic looking 50 Cent superimposed on a black background, versus the original version’s white cover, where for reasons that aren’t clear he was made to look more cartoonish, right down to having some hack artist scribble ink all over his body. True, cover art doesn’t change what the album sounds like, but the “Special Edition” is definitely more aesthetically pleasing to look at. Chalk one up for the new. Then the fine folks at Shady/Aftermath/Interscope decided to do us one solid and add a new track to this release, the “Outta Control (Remix)” featuring Mobb Deep. More than one bonus track would have been nice, but this one is a solid joint so once again you can chalk a point up for Massacre 2.0 – no wait, take that point back. Instead of adding the new version as an extra track they replaced the original version from the previous release. If “Outta Control” was hot enough to remix, don’t they think consumers want to hear the original too? As if that weren’t enough they also removed the original bonus track, the “Hate it or Love It (G-Unit Remix).” We all know 50 and The Game have beef these days, but the only people who get screwed by removing this hot song are the fans and listeners. This drop’s the album’s length from 77:34 to 73:56, which ALSO suggests they could have left the original “Outta Control” on the album and still had the remix as a bonus track if they were so hard up to get The Game off his CD. So now you have to erase one point off the chalkboard, which by the current standings means there’s no incentive to buy this re-released edition of the album.

Actually there is one incentive not already mentioned – 50 and the labels involved decided to pack in a bonus DVD with this album. The back cover says it “includes video for every song” – that’s a hell of a statement. You mean they filmed a video for each track, even the ones not released as singles? It seems they did, but not all of them are quality. In some cases like “This is 50” it just seems they took unused stock footage of the rapper, added a few video effects, and tried their best to match his actions to the song’s beat and words. If you watch closely though, it’s easy to see his lips are not in sync. I’m not a lip reader myself but I’m sure someone who is would report that he’s doing an entirely different song, one that could even be from his last album for all I know. Some of these videos do bring the goodness though – the computer animated “Piggy Bank,” the comic book style “Gatman and Robbin” featuring Eminem, the cinematic “Ski Mask Way” and “Ryder Music” and the concert footage from “Position of Power” among others. Of course the videos you would expect and already enjoy are there too: “Candy Shop,” “Disco Inferno” and “Just a Lil Bit.” Those three are certainly incentives to buy a DVD by itself. The disc also offers up a couple bonuses – a preview of the “Get Rich or Die Tryin'” movie (where some of the footage for these videos may have come from), and a preview of his upcoming game “Bulletproof.”

In the end there are two reasons you would buy “The Massacre – Special Edition.” Reason one would be that you want the bonus DVD, which could easily have been sold as a stand-alone for $15-$20 and probably would have been worth the price. The other reason would be that you waited and didn’t buy the original album release for whatever reason – short on funds, baby momma hit you up on Tuesday, whatever. Those who already own “The Massacre” have a tough choice though. On one hand it’s the same album, and on the other hand they made some changes to it which in the end don’t help and may even hurt it just a little bit. That leaves a dedicated core of 50 Cent fans as the ones who would purchase this album – the same ones who would have bought the DVD as a seperate release in the first place. The bottom line is that if you do decide to purchase this “Special Edition” you’d better know in advance that the only really special thing about it is the extra pack-in disc, and if you’re not that hard up to watch a bunch of 50 Cent videos that will never play on BET or MTV this one’s not for you. Otherwise there’s some value to this new edition, but whether or not it should be called “Special” is debateable. It’s good but it really isn’t better than the original, which honestly should have come with a bonus disc of some sort to begin with. You have to give the consumer their money’s worth, even if it’s only 50 cents more.