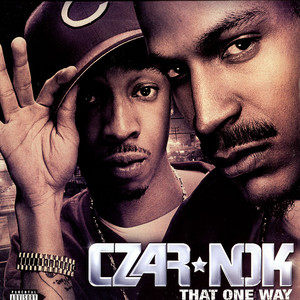 Rappers from Cincinatti, Ohio have got to be a little frustrated that all the attention on their state seems to head in other directions. Despite a strong hip-hop scene with it’s own “Scribble Jam” competition that has made stars of underground rappers from Eminem to Eyedea, and produced recognized names in the hip-hop scene from Main Flow to Hi-Tek, a lot of rap heads automatically think Bone Thugs in Cleveland for commercial rap, or turn to the underground scene in Columbus for the likes of Blueprint.

So who’s out to change that perception? Czar*Nok, that’s who. This duo take their album’s name from a commonly used Cincinatti phrase (or so they say, and I take their word for it) that’s equivalent to “by any means necessary.” In other words their album epitomizes their hustle to get the props they deserve, not just for themselves but for their hometown. Rappers Hayczar and E-Nok are convinced that they aren’t being recognized, everybody’s been sleeping way too long, and “That One Way” is the album that’s long overdue to solve both problems.

Musically the Czar*Nok duo have the diversity and quality of beats to succeed. Three 6 Mafia’s DJ Paul and Juicy J lace them up with a pounding track for “Throw Me That Pack” that Lil Jon would be proud of. “Pimp Tight” is exactly as billed, thanks to a swinging Koolade track that values the triangle and the clap just as much as the snare and bass on beat production. The Suicide Kingz get straight St. Lunatics on “She Walked My Way,” L.T. Moe favors strong piano sounds on “Money Talks,” and even Kanye West gets down with the team by producing “A Time to See.” The latter track has the strongest crossover potential:

“Name a better place, than here with me
We can hit the mall, pick up the gear you need
Everything you needin from the Marcus of Neiman
Grab that new Gucci bag – I see the way you been dreamin
in Saks, don’t even ask
Play around in every store that we pass
Cramp the window and shop
As champagne drop in the dressing room
Youse a princess, you deserve that princess cut sho’ nuff”

Unfortunately this song smoothly executed as it is also shows up a major flaw in Czar*Nok’s game, which is just how superficial and shallow they are. The album’s back cover is bundles of money sitting next to a pair of plastic hands offered up in prayer, a theme that’s repeated again throughout the liner notes of the disc and the lyrics of their album. Take the chorus of the album’s first song: “It’s G-A-M-E, P-I-M-P, M-O-N-E-Y, he don’t tell no lies/with a bitch on the side that ride, you wanna try that ho you gotta buy that ho.” I’m sure I’m not telling Czar*Nok anything they don’t already know, but there is no shortage of pimps in rap music these days. The next track “Street Money” doesn’t deviate far from the theme though, with only the means to get the bread changing: “Street money, still comin, money sick, I got niggaz that’ll kill somethin for me.” It’s like that all the way through “That One Way,” and the song titles really do illustrate the point: from “Gangsta” to “Can’t Get out the Game,” from “Pimp Tight” to “Pimpin’ and Gangsta.”

The most disappointing thing about Czar*Nok is the potential wasted. Both Hayczar and E-Nok seem reasonably competent as rappers, but they just don’t find anything to say that’s interesting. Without drop dead punchlines or a really unique style to their flow to hook people in, they can’t overcome the lack of worthwhile topic material. The beats are solid from start to finish, but all the good paint in the world can’t make a Picasso if it’s not properly applied. “That One Way” really is headed in just one direction – the bargain bin.