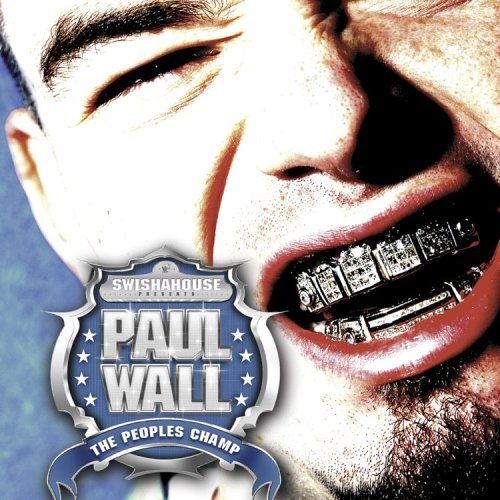 “What it do it’s Paul Wall I’m the people’s champ
My chain light up like a lamp cause now I’m back with the camp
I’m crawlin similar to a ant cause I’m low to the earth
People’s feelings get hurt when they figure out what I’m worth
I got eighty-fo’s, pokin out, at the club I’m showin out
I’m a player ain’t no doubt hoes want to know what I’m bout
Biggest diamonds off in my mouth, princess cuts all in my chain
Woodgrain all in my range, drippin stains when I switch lanes”

For those who weren’t already familiar with Paul Wall in the Southern underground from albums like “Get Ya Mind Correct,” this verse in Mike Jones’ smash hit crossover track “Still Tippin'” definitely put Houston’s dirtiest white boy on the map. By the time Wall proclaims at the end of his verse that he’s “got the internet goin nuts” it’s pretty much accurate – it’s hard as hell to figure out how this loco gringo got so damn crunk and funky. One thing’s for sure about Wall, he’s not frontin’ at all. One look at his grill full of diamonds on the front cover of “The Peoples Champ” shows he ain’t tryin’ to be a rap pretty boy. In fact with no disrespect intended to Wall, I’ll be damned if that’s not one of the UGLIEST album covers I can ever recall looking at.

Wall is more than happy to be ugly though, because sometimes it’s a lot easier to get respect looking like a poster child for dental abuse than it is to be a bleached blonde pretty boy like Eminem. And that’s no disrespect to Eminem either, because he still proves himself as a lyricist and freestyler each time out, making people forget his appearance and take his rap serious. In his own way Paul Wall is doing the same thing, only his voice is a lot deeper and his style is a lot heavier. In fact it’s hard to get any heavier than his opening track “I’m a Playa,” produced by and featuring Southern icons Three 6 Mafia. Take a look:

“It’s Paul Wall baby yeah that’s me
These hoes wanna know what I’m bout
Princess cuts all on my neck
And on my wrist and in my mouth
Do’s open, do’s close
Where’s the camera I’ll strike a pose
I’m still ridin on elbows
In eighty-threes and eighty-fo’s
The gangsta slab is what I flip
Woodgrain is what I grip
That purple drank is what I sip
In my cell phone keep a chip”

He’s as Southern as the Dirty South gets, balling just as hard as the best of them. There are a lot of great tracks on this seventy minute long, 17 track deep album but one of my personal favorites is the extra hard mashing “They Don’t Know” on track number two. Paul Wall and Bun B co-star on the song and both get HELLA dirty:

Of course by now most people have heard the extra crunkdafied single “Sittin’ Sidewayz” produced by Salih Williams, and that alone would be worth the purchase price:

“It’s the people’s champ, I’m something like a baller
The candy paint drippin off of the old school Impala
I’m with that Big Bank Hank, that Poppi Joe and Box
Trunk bump like chicken pox, turn the bass up just a notch
You see them blades choppin, you see that trunk poppin
Hoes that diss me in the club, the same hoes in the parkin lot boppin
They see me in the Jag, actin bad with T Ferris
Open mouth and showcase ice, and you gon’ see about 20 karats”

Let’s be frank – the topic matter of “The Peoples Champ” is not really that deep. It’s about flossin’ and glossin’, stylin’ and profilin’, wheelin’ dealin’ and stealin’ all while fucking the baddest bitches and drinking the most dranks. I’m okay with that. Paul Wall is very serious about the style, and is proficient enough as a verbalist to not only inject charisma into his flow and make it tight but add some unexpected wit and humor to it as well. What’s extra fresh about “The Peoples Champ” is that it’s yet another in the line of “two for the price of one” Swishahouse releases, coming ocmplete with a bonus “Screwed and Chopped” disc of his album courtesy one Michael ‘5000’ Watts. If you’re a fan of any of the Southern superstars from Lil’ Flip to Devin the Dude to Scarface to DJ Screw (the list goes on and on) Paul Wall’s “The Peoples Champ” will fit comfortable into your rotation. In fact if it weren’t for his hella ugly grill on the cover, you’d probably never realize there was something a little different about this Swishahouse champion. Wall has nothing to prove to anyone though – he’s as crunk as they come, crunker than a lot of them and has the skills that show like The Rock before him, a self-made title like “The Peoples Champ” is well earned.