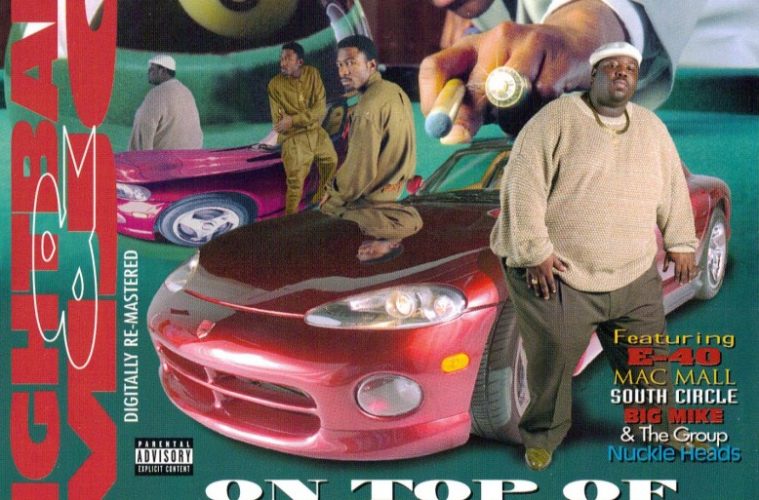 Eightball & MJG :: On Top of the World

It’s odd sometimes how certain things change gradually right in front of you without you even noticing. Unless you can take that which is before you right now and directly compare it to the way it used to be, you’ll be entirely convinced in your mind that nothing ever changed at all. The shockers are easy enough to find thanks to modern technology. A photo of you ten years ago looks nothing like you do today. An actor you like ten years ago will look nowhere near the same today (unless they have a really good plastic surgeon). A magazine you’d swear was the same for all the years you’ve read it will have a completely different faceplate and layout than it did back then (and probably be crammed with a lot more advertising).

Of course nowhere does your false perception of reality come into more stark relief than when you go back to an artist you’ve been listening for more than a decade to an early point in their career. This was made abundantly clear to me on the re-released Eightball & MJG album “On Top of the World,” which used to be a product of the Suave House label but has since been transmuted to something former Suave CEO Tony Draper now calls “Draper Inc.” To be honest I consider it to be of little consequence, since every reference to their label that Eightball & MJG make on this release still says Suave – and thank goodness too because I’d be a little upset if Draper tried to rewrite history. What he doesn’t need to change though is just how much higher pitched Eightball’s voice is. No bullshit. I’ve gotten so used to Ball’s deep and booming voice I had firmly convinced myself it had always been this way. That false belief was quickly shattered by the first full song “Pimp in My Own Rhyme.” It’s still a classic a decade after it’s original release, but while MJG’s gruff voice sounds more or less the same Eight is definitely eight notes higher than you think despite still being easily recognizable as his same pimptastic self:

“Unh, light up the bomb, cause here I come
It’s Eight-bizall got the remedy
Dr. Green’s sticky got the cure for me
Pimp tight, I’m so tight, takin flight like a kite
When the wind blows, creepin in my Timbo’s
Most, hoe’s know, I’m out to get the loot
Fuck being your boyfriend girl I wanna hit the boots
Jump, deep in that rump, and then I got a flat bitch
You should’ve known how a real nigga act
That’s, why I be, about my P’s and Q’s
Cause hoes end up being bad news
Find ’em, fuck ’em, split ’em, forget ’em
Let the hoe go, so the next Joe can hit ’em”

One thing that definitely hasn’t changed over the years is the subject matter of Eightball & MJG’s songs. They like to smoke a little, drink a little, fuck a little and talk trash a little. One thing that certainly hasn’t changed is their ability to pull in other equally popular artists to collaborate with them, as E-40 does here on the slow grooving “Friend or Foe”:

“Some had it all doe, but less unfortunate
You had an alloy spoke Mongoose and I had a Huffy
You owned a green machine, three different lunch pails
I had a go-kart that I built from a bunch of used nails
We grew up in the church together nigga, Sunday school
Now I heard you off into jackin nigga, that ain’t even cool”

Figuring out the liner notes on this album is not complicated, as T-Mix produced the entire thing from start to finish. This results in some songs that are timeless, while others are completely forgettable. The sly strummed funk of “Hand of the Devil” is in wry contrast to a song about being led into doing bad. The Roger Troutman-esque funk of “Top of the World” begs to be played over and over again. Tracks like “Comin’ Up” and “Space Age Pimpin'” are seminal Ball and G classics that will never get old. They do say that not all wine gets finer with age though – some peaks at a certain age and starts to lose flavor. As such I can’t savor the cheesy sounding “What Can I Do,” which sounds like a rejected Bushwick Bill style “Chucky” track. “What Do You See” tries to start out instrumental free with a catcht melody, but after hearing the same four notes over and over you realize it’s not catchy at all. And maybe it’s just me but “In the Line of Duty” sounds like a Taco Bell commercial.

On the whole though Eightball & MJG have always known how to take the otherwise limited subject matter of vice and expand it into compelling tales that can even overshadow somewhat average beats. If you had to put a finger on it, it’s the supreme confidence that they have in their own ability, that gift all performers have to know they are the shit and believe in it. Some would call it being egotistical or cocky, but “On Top of the World” they just call it “Space Age Pimpin'” and do it to the fullest. While this seminal album is more for fans of the group than those who have not discovered their Southern tag team rhyme scheme, these closing words from MJG should give you an idea why their game is so tight they can refer to it in futuristic terms:

“Who knows, fine clothes
Lexus do’s you’ll be closin
When you become one of the chosen
Hoes in different places, different faces
Different cases, got me tied like shoe laces
No mistake it’s MJG, you ain’t gotta be
Constantly tryin to shoot that P
Claimin that you ain’t heard of me
Keepin it real
Let me know how you feel when we communicate
We’ll be straight
if you express yo’ mind instead of preferrin to wait
Some who, can’t do it, lose women
But a nigga like me used to it – space age pimpin”