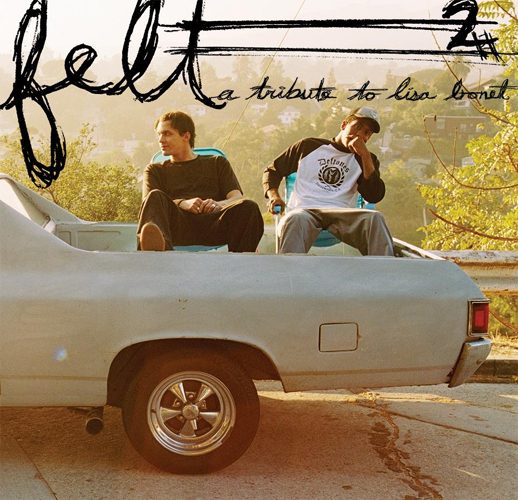 Murs and Slug are on some other shit. True fact, but also a big understatement if there ever was one. Murs and Slug are not just on some other shit, they’re on some other planet. These two rappers, individually and collectively, are less afraid of making boldly different rap shit than 90% of the “keep it real” hip-hop artists out there today. There’s nothing wrong with keeping it real, but sometimes the surreal or the unreal are just as interesting. So what can you say about two guys who individually have released great albums like “3:16 – The 9th Edition” and “God Loves Ugly” when they come together to record an album? The same thing you’d say if Pharoahe Monch and Aceyalone were going to record an album together – holy shit! That’s some MORE than next shit.

For Murs and Slug this isn’t even the first time they’ve collaborated together. They started out by releasing the well respected but somewhat commercially hard to find “Felt: A Tribute to Christina Ricci.” Does that mean the duo are obsessed with the actress who has had roles in such films as “Fear and Loathing in Las Vegas” and “Sleepy Hollow” among others? Not necessarily. Although in a sense the tribute provided a theme for the album, the duo also had songs named “Rick James” and “Suzanne Vega” on their first disc. The theme actually seems a little more defined the second time around on this one. Ant, who Slug fans will know from his many Atmosphere collaborations, handles production duties. Track titles which can be found on “Felt 2” include “Bonet (Cement Angels)” and “Lisa (Never Easty on my Nextel)” but also include things that seem entirely unrelated to Lisa Bonet like “Morris Day” and “Gangster Ass Anthony.”

Typically with projects from either rapper, the less time you spend trying to figure out their point and the more time you spend enjoying the beats and rhymes the better. “Felt 2” fulfills this credo perfectly – shut up and enjoy it. You could spend days analyzing what “I Shot a Warhol” is about. Are they rallying against the mass-produced pop culture art which Warhol ushered in? They do rap about enjoying the sound the pistol makes when it whistles through a canvas. Are they speaking out against the contradictions of fickle fans when they say “the soundtrack, she hated every single song, but everybody else seem to want to sing along?” Or is the title a self-indulgent way to be provacative and merely an excuse for Murs & Slug to say what the fuck they want?

In a sense the greatness of an album like “Felt 2” may simply be that it keeps you guessing. Whether or not you can feel what they “Felt” when recording it, you can superficially dig into the music just on the basis of the production and the effortless way the bookish thug Murs and the nerdy gangster Slug combine together to trade off narratives that are “open apology to anyone who follows me” on songs like the epic “Marvin Gaye.” This is one of those rare kind of albums where you could enjoy the entire thing from start to finish, or pick any individual track and enjoy it just as much. To prove the point I randomly selected track three “Your Mans and Them” and was instantly blown away by the sly shuffling funk Ant laced and the visually sharp narrative Murs provides:

“Nah that’s that one dude that nobody asked to come through
No matter what he does it always comes off rude
Excuse my hood etiquette, but somebody better get
this fool out my face, cause if don’t nobody tell him shit
I’ma snatch the bitch and start to wrinkle up his school clothes
Imagine if I had to sink my fist into this fool’s nose
There goes another story, straight to the rumor mill
Murs is actin up again, somebody tell this dude to chill”

And who among us hasn’t been there, asking “what’s up with your mans and them” when they get drunk and throw up everywhere, ruining an otherwise good time? Sometimes the songs are that easy to relate to, others could take you days to figure out. Whether they’re profound or hardcore, you’ll enjoy the trip and the search to know where Lisa Bonet really fits into all of this. “Felt 2” is highly recommended for fans of either Murs or Slug, seperate or together, and Ant’s diverse and deep range of sounds could easily get him a producer of the year award. Don’t sleep on this one.