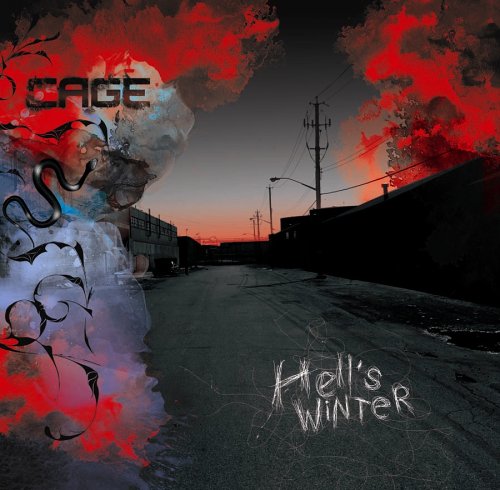 With few exceptions, the key to longevity is change. Someone as distinct as Cage must reinvent himself, or at least his own style, in order to stir up new fans. It can be as simple as finding the right producer, but a series of works that resemble each other too closely will likely be found disappointing. Cage has been around for a while now, and his success has never really called for a change. Change has come, though, not through artistic motivation but self-examination, and Cage is emerging for his second solo album all grown up. He’s still the same person, this is very clear. He has simply decided to stop writing sensational rhymes, focusing his attention instead on letting his soul breathe through the microphone.

The production on “Hell’s Winter” is a perfect match for Cage’s rhymes, a brooding collection of futuristic funk from the boys down at Definitive Jux. El-P provides a handful of beats, but it is obvious that he has overseen the entirety of the record from a musical standpoint. The opening “Good Morning” is vintage El-P, a smashing display of electric guitars and throbbing bass. Cage has fully arrived, as he makes clear from the beginning:

“Sky scrapes planes, hit ’em army in the subway
High risk, orange alert everyday
My clique is a clip that spits in glock land
Walk like I’m from the hood, hair like an indie rock band
Throw fits then pitch, from hammers blow lungs up
Before Onyx was tellin’ me, was throwing them guns up”

His verses on “Hell’s Winter” are maddening displays of description and rather abstract details, but his intent is always clear and most importantly, intelligent. When there is not a concept behind the song, as with “Good Morning,” he makes up for a lack of organization by barraging the listener with grotesque but ultimately accurate images of modern decay.

Cage has realized what being an artist is all about. He is no longer interested in proving to us how fucked up his head is. He has done all that. Now, he is beginning to explore the “why,” and that is what makes up much of this album. “Too Heavy For Cherubs” follows “Good Morning” with an examination of his disturbing relationship with his father. Throughout the album, there is the occasional exaggeration, and this is found here with his reminiscing about “being a kid and getting’ my ass kicked, and when I sold my soul to the devil to make me rap sick!” His depiction of selected moments from his childhood goes a long way toward explaining any emotional struggles he currently has. Blockhead’s sorrowful and noisy beat is the ideal backdrop for these musings.

“Stripes” deals with his deadbeat dad even further, and Cage turns it into a powerful diatribe against the man that destroyed his youth. The anger here is not fabricated, Cage is furious and he is expressing this fury through these rhymes. Check out his bio on the Definitive Jux website, and you’ll notice that his life has been remarkably difficult. While his debut, “Movies For The Blind,” was a powerful but wildly exaggerated album, Cage is very careful to craft “Hell’s Winter” as a true account of the reasons he is the way he is.

There are very few deviations from this self-exploration. A noisy Camu Tao beat helps channel the energy of an impressive collection of rappers on “Left It To Us,” which features El-P, Aesop Rock, Tame 1, and Yak Ballz. Unfortunately, because of the intensely personal nature of the rest of the record, this track feels both out of place and unnecessary. Cage is consistently ripping his way through the album in incredible fashion, so the posse cut could have been left out. The smoldering “Public Property” has Cage rocking by his lonesome again, this time agitated because of various record label problems from the past. He is consistently able to fluidly express his anger directly at the source, and this is an example of his growth as a rapper. No longer wild and offensive, his words have a true purpose. On “Lord Have Mercy,” he showcases his stunning storytelling skills in an intricate tale that demands significant attention.

A rare DJ Shadow appearance highlights the politically oriented “Grand Ol’ Party Crash,” but Shadow makes sure that the track fits the mold of the rest of “Hell’s Winter.” This is Cage’s ode to Mr. President, but he expands the scope to include many of the elements of today’s society that he fears and doubts. His vicious words are aimed at a variety of subjects:

“Maybe I’m crazy but I will not just follow the herd
Unless, of course, it’s en route to lynch Mike Bloomberg
Being pimped by a gas pump, and all its Saudi members
Are like Fuck You with New York’s two middle fingers
If the opposite of pro is con then look beyond this
The opposite of congress must be progress
What if the 2nd coming’s aborted and put in the dirt?
I still don’t know what to wear with this orange alert”

“Peeranoia” features the sardonically funny Cage that most his fans are attracted to, but this time, his humor is directed at his own life. He manages to flip his own insecurities around on himself in examining his past, and the message is both amusing and haunting. His final words of the song are “I need a new drug to make me okay, and a place to keep my shit when they come to take me away.” These words remind us that no matter how much Cage has figured out about himself in writing this album, he is still a fragile human being and his issues are far from over.

Though I am not usually a proponent of Def Jux’s tethered grunge, the seriousness of the subject matter that Cage presents us with is ideally suited for this explosive music. Each producer does a lovely job of adhering to the formula without repeating, so none of the fourteen songs on “Hell’s Winter” are worth skipping. Cage has taken me totally by surprise, because he has morphed into one of the most honest rappers I have encountered. This is a potent statement of his beliefs and the struggles that have shaped these beliefs, and one of the finest albums to come along in a great while.