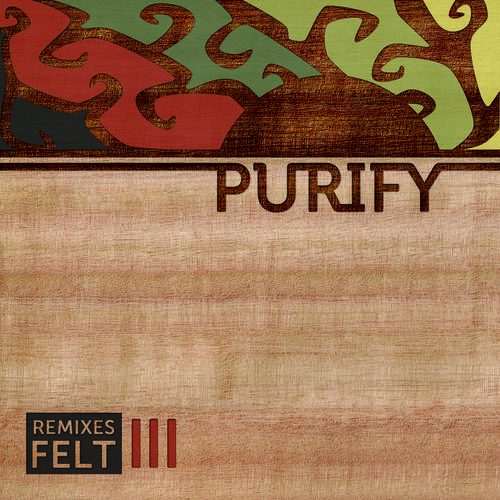 First off, I have to fess up to having slept on Felt, the project with L.A. rapper Murs and Minnesotan/Rhymeslayer/Atmosphere rapper Slug. I’m a fan of both rappers, but never got around to picking up any of their three releases. This remix by Midwestern producer Purify of Felt’s last album, “A Tribute to Rosie Perez,” is as good a place as any to start.

I’m familiar with Purify’s work with Fort Wayne, Indiana rapper Sankofa. I was impressed with his jazzy beats on Sankofa’s “Music With Friends Vol. 4” EP, and I was happy to check this project out. Not that he makes it easy on himself. The original beats were all handled by Aesop Rock, and head RapReviewer Flash liked them so much he gave them a 10 of 10, which means that they couldn’t get any better. (http://www.rapreviews.com/archive/2009_11_felt3rosie.html). He ends his review by writing “This album will change what music is and can be – not just hip-hop – music as a whole.” What the hell is Purify doing messing with music that has garnered that kind of praise?

Purify isn’t the only producer who has taken a stab at remixing “Felt 3.” The fact that Accapella’s of “Felt 3” are available on iTunes may have something to do with the number of indie producers taking a stab at it. less than impressed with. So how does Purify hold up to the original?

My only point of reference is “Glory Burning,” which is the one song off of “Felt 3” that I’m familiar with. Aesop Rock’s original takes the futuristic, industrial noise of fellow Def Jux teammate El-P, and backs it with atmospheric textures and some solid hip hop drums. Purify abandons that all together, using string instruments, atmospheric synthesizers, and muted drums. It doesn’t have the power of the original, but offers a slow, menacing burn. In that way, it stays true to the feeling of the original, while providing a unique sound.

Purify offers subtle reinterpretations of the songs, not radical reworkings. Murs’ and Slug’s lyrics stay intact (from what I can tell), with Purify switching out the beat without deconstructing the song. Frankly, that’s my preferred type of remix, because I find them more listenable and less annoying than remixes which reduce the source material into some sort of abstract noise art piece.

If you are new to Felt (as I was), it’s basically Murs and Slug vibing off of each other, trading verses, and having a good time. It’s not that they aren’t bringing their A game, but there is a looseness to this record. You can tell they worked hard on the album, but they had a good time doing it. The subject matter ranges from Slug’s frequent concerns of drug abuse and the plight of the working poor to less weighty topics like how many wack ass rappers there are out there. Murs and Slug call out Myspace rappers for the posers they are, and call out gangsta rappers for the violence in their communities that they are complicit in. Felt is two veterans showing how hip hop is meant to be done.

What Purify brings to Felt is a mixture of mellow, acoustic sounds with some harder edge beats. Many of his samples seem to come from Latin music. Opener “Paul Reubens” layers a Spanish-style acoustic guitar with block rocking beats, setting the tone for the disc. “Permanent Standby” adds some bossa nova cool; “She Sonnet” is Brazilian psych-folk; “Felt Good” mixes in some Afro-Cuban funk; “Revisiting the Styletron” samples Latin funk; and “We Have You Surrounded” is on a serious Blaxploitation tip.

When Purify misses, he sounds non-descript and boring. His ambient beat on “deathmurdermayhem” doesn’t get in the way, but doesn’t add anything, referencing PM Dawn. Speaking of PM Dawn, Purify’s take on “Ghost Dance Deluxe” seems to share a sample of Spandau Ballet’s “True” with PM Dawn’s “Set Adrift On Memory Bliss.” These two tracks, and a couple others on the album, felt inconsequential and unessential. Not bad, just not really worth the time. That criticism aside, Purify’s misses are few, and don’t detract from the album as a whole.

I’m a sucker for Latin music, and I liked the contrast of acoustic samples and hip hop beats, so I was feeling a lot of this album. I don’t think that Purify improves upon the original “Felt 3,” but his take is an interesting one, and worth a listen. If nothing else, it shows that Purify is a producer to keep an eye on.