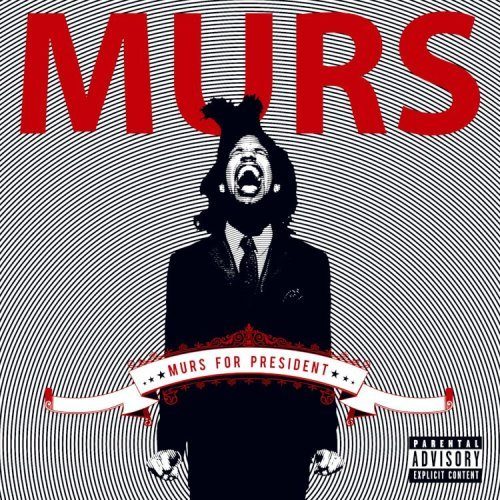 This is a heady time for American politics. With the U.S. on the verge of possibly electing its first black president and the rest of the country seemingly spiraling out of control, we are ripe for a charismatic leader to swoop down and carry us away toward a better tomorrow. The promise of broad based change and cautious optimism are tempting given our current state â€“ and it is certainly better than what more traditional camps are peddling â€“ but we ought to be careful not to get swept away in any cult of personality that trumps our commitment to critical analysis of our current situation. Progressive populist leanings are all good, as long as they stay true to the ideals that sparked their movements before they shot to superstardom.

Obviously I’m talking about more than just Murs’ new album, but his story fits surprisingly well into this familiar narrative. The Mid-City MC has definitely earned his stripes in the underground. With plus or minus ten albums under his belt, depending on how you count collaborative projects and his Living Legends work, he has now signed with Warner Bros to make his new album, “Murs For President,” the first major label release of his career. This inevitably makes some fans wary for reasons both snarky and understandable. Despite promises from countless artists that inking with a major means they “might blow up but won’t go pop,” that is often exactly what happens, leaving long-time fans irked at the appeal to the musical lowest common denominator. However, it’s also true that underground heads have a tendency to dismiss anything that gains widespread attention, regardless of its actual quality, in some elitist attempt to horde the best artists for themselves.

It’s a virtually impossible scenario for an artist trying to make the leap, but if anyone can pull it off, it is Murs. Among likable MCs, Murs is one of the most congenial. He has the everyman vibe down better than anyone else in rap right now, with the possible exception of Phonte from Little Brother, and his down-to-earth rhetoric combined with exceptional mic skills make him easy to appreciate. He has also been helped in this regard by well grounded production from the likes of Mum’s the Word and Little Brother alum 9th Wonder, both of whom pair well with Murs in his effort to connect sincerely and forthrightly with listeners. Because of his chemistry with certain producers, he wisely chose to pair up with 9th Wonder for his last three outings, leading to a troika of thoughtful, coherent albums that helped him progress as an artist. Over the years, though, 9th’s beats, while still very good, have begun to sound a bit monotonous, and the beatsmith has appeared to be weighing Murs down, leading fans to speculate as to when he would branch out and work with other producers again.

On “Murs For President,” he does just that, making it his first solo album with different producers since 2003’s “The End of the Beginning.” That album was released on Def Jux and helped him garner widespread acclaim for his craft with its sprawling track list and collaborations with other indie favorites like Oh No, Rjd2, Aesop Rock, and Shock G.

For his major label debut, Murs has gone in a different direction, ditching both the Legends crew that put him on and the Jukie sound that made him famous, in favor of a more polished, west coast feel. For the most part, it works, with songs like Nottz’s “Me and This Jawn” and Josef Leimberg’s “Soo Comfortable” successfully charting new territory for Murs, who sounds comfortable as ever over some smoothed out, funky beats. Khalil’s “Road Is My Religion” bridges the gap between the old and new Murs sound with some catchy guitar distortion and a pounding “We Will Rock You” drumbeat while Murs gets in his storytelling groove, detailing his life on the road. Heck, even will.i.am’s contribution on “Lookin Fly” is a winner, in all its Green Hornet-sampling glory, continuing will’s streak of solid work on everything but his Black Eyed Peas projects.

Lyrically, Murs is Murs. He’s up to all the same tricks â€“ lovably clowning around, spinning vivid tales about his everyday life, and, of course, rapping about his complicated relationships with women. As for the album’s title, while he doesn’t focus too heavily on the obvious subject, he seems to have drunk heavily from the Obama well of hope and inspiration, frequently offering uplifting platitudes that sound knowledgeable rather than trite. On the opener “I’m Innocent,” he counsels, “Don’t ever let the fact that you can’t be perfect stop you from doing your best,” and he goes on to advise, “You gotta move with urgency, assert with certainty / Ask me if I’m set to serve, I say certainly.” If anything, his lyrics and delivery have gotten sharper, as if the poppier soundscape motivated him to come even harder lyrically, as evidenced by his performance on the Snoop Dogg collaboration “Time Is Now.”

“My grey anatomy bust through they academy
Crush the mainframe and change the game radically
Move with such majesty, crews that try to battle me
Totally terrorizin’ they teams, another tragedy
Never has the game seen such savagery
The audacity, all of these rappers mad at me
Risin’ so rapidly, I defy gravity
Next up is Dogg, I thank y’all for havin’ me”

Who says a major label release can’t be lyrical?

While it initially feels like a breath of fresh air to hear Murs over production by someone other than 9th Wonder, it soon passes when you realize that the new array of beats are at times downright mediocre and the guest MCs (where they do exist) fail to match the Murs vibe as well as past collaborators. In perhaps the album’s biggest surprise, many of the best tracks come from 9th Wonder himself, who, whatever you might say about his snares, can still cook up a hell of a beat. The chemistry between Murs and 9th is apparent whenever the two get together, and the three 9th contributions â€“ “I’m Innocent,” “Love and Appreciate II,” and “Breakthrough” â€“ are easily among the album’s elite tracks, especially when compared with songs like the rap-rock hybrid “A Part of Me,” which is thankfully the only such indulgence.

It’s hard to knock someone for wanting to diversify their sound, or for trying to get more exposure for themselves, especially when they are as talented as Murs. Unfortunately, in going mainstream, it seems impossible to avoid the inexorable move to the center of the spectrum, whether it be in politics or music. As a result, “Murs For President” once again proves that just because you CAN work with higher profile artists doesn’t necessarily mean that you should. In this case, Mr. Dibbs and Oh No might have been preferable to will.i.am and Nottz, even though the beats here are decent enough. It’s cool to see Murs get the money he deserves for his project and even to hear him team up with luminaries like Snoop, and it’s head and shoulders above the other garbage the major labels are circulating these days. For my money, though, I’d still rather hear him rocking with 3MG over a Mum’s beat. As they say, you’ve gotta dance with them that brung you.