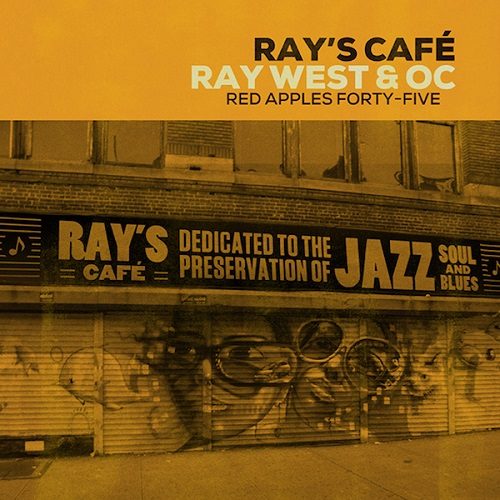 From emo to cloud rap, from drug to weirdo rap, a lot of more recent rap music has been about capturing moods, however vaguely or precisely. “Ray’s Café” excels at mood-capturing. And although some would argue that it has little in common with contemporary sounds, it’s actually a very modern approach to the kind of rap that refers to a time in the past. Producer Ray West has already been part of Diggin’ In The Crates side projects like “LUV NY” and “Everything’s Berri,” and “Ray’s Café” strengthens the D.I.T.C. affiliation by joining him with Omar Credle.

The recently released deluxe CD edition essentially combines the original “Ray’s Café” vinyl from January and the upcoming “Ray’s Café – The Afterhours EP.” O.C. plays the part of maître d’, making the listener feel welcome at this virtual café – that could be situated in any major city but is of course particularly easily imaginable in New York. It’s a sanctuary for kindred souls who enjoy a moderate amount of shots and smokes accompanied by charming companionship and good music. It’s a scenery typically populated with blues and jazz musicians and an environment a rapper primarily has to prove himself in. There are a number of rappers who could emcee an evening of refined entertaiment or just an informal afterhours, although all need to bow before the late Guru, who hosted a total of four “Jazzmatazz” projects.

But do not mistake “Ray’s Café” for “Jazzmatazz.” It’s two guys creating the illusion of a band playing for a gathering of cool cats and hot foxes – canned applause included. At the same time O.C. does his best to establish the place as a metaphor for a universal refuge from the hustle and bustle of the streets where you can check your cares at the door. Sounds like an advertising slogan for any hip joint, but in O.C.’s words it becomes more:

“Welcome to Ray’s Café – all welcome, none selfish
Shots at the gate, Grey Goose and Welch’s
Good sense allowed, bosoms flourish
Bones get buried in the dirt, everyone’s acknowledged
Similar skies showin’ no signs of downpour
Out of state fam, it’s why they came to town for
The way things poppin’ you would think it’s July 4th
Each day’s a holiday, we keepin’ the vibe goin’
No time for drama, this ain’t the place to set it off
Dice get the guns lettin’ off
Grown folk relax like adults supposed to
You amped up? Then listen to the sound of my vocals”

The instrumentals have the same effect, Ray West calming the savage beast in us with organic tracks that set a soothing mood, often sending rapper and listener on a smooth ride (like with the futuristic retro funk of the title track), but sometimes also taunting us rhythmically, see “Have Fun” where he strikes up a leisurely grand guitar groove that requires O to pause his flow in similar fashion, or “Gotta Luv It,” which literally forces you to slow down and listen and catch the song’s deepest line – “What I’m part of in this life is bigger than I know.” It’s one of those instances where you will hardly distinguish that someone is rapping, that’s how well O.C. blends into Ray West’s backing.

It’s not always just understated – cuts like “Soul Kitchen” and “Lovers” glow with soul, while the ’70s pop sample makes “YMI” come across like the little hip-hop-bumping brother to last year’s hugely successful Daft Punk album. With the “Afterhours EP” the project loosens its grip on the past, although not necessarily for the better. Also, next to stellar production in the form of “Ray’s Café” and “Soul Kitchen” much more standard soul-based beats like “Go Back” and “Breaking Rules” are underwhelming. All in all, however, “Ray’s Café” successfully transports the grown-up vibe it goes for. Somewhat in contrast, O.C. repeatedly refers to feeling rejuvenated, so this is a recording where the listener has to reconcile statements like “Only gentlemen do things like this, young’n, so learn something” and “Feeling free as a young’n chewing bubblegum.”

His career could have been bookended by two near-masterpieces, “Word…Life” and “Trophies.” Still it’s cool of O.C. to tackle something different. Of course the substantially political, poetical and personal “Trophies” was an entirely different beast than “Ray’s Café.” There’s full-length potential in this collaboration, yet the philosophical waxing may be a touch too vague to last an entire evening. That’s no slight on the lyrical material. O.C. is inspired by the beauty of life itself, and although injuries and infirmity are inevitable, O.C. wants us to make the best of it:

“We uninhibited, trial and error, this is life lessons
Peel back the layers – there’s the message
What I does, see, I’ma do till my last breath
Take advantage of life cause you can’t cheat death
So have fun”