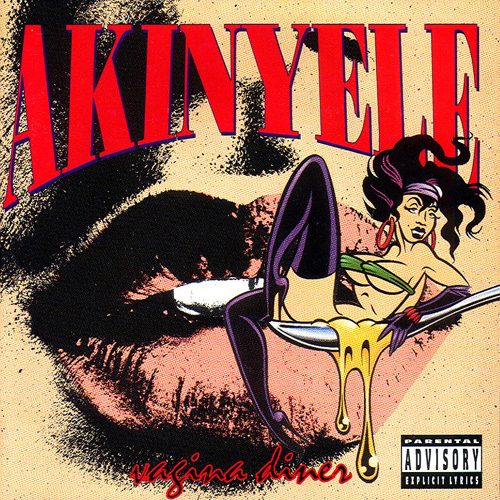 Despite never truly breaking through, Akinyele is an essential piece of hip-hop history. He is famous for his raunchy classic “Put It In Your Mouth,” but he is easily the most accomplished one-hit wonder you’re likely to find. He is a historical footnote for his appearance on “Live At The Barbeque” rapping in Nas’ 17 year-old shadow. His connection to the Large Professor, the author of the wondrous “Breaking Atoms” LP as most of Main Source, landed him a cushy job rapping over the man’s celebrated instrumentals. Ak’s debut, “Vagina Diner,” is the other album from this golden era that was produced by Large Professor. One could argue that Ak was simply in the right place at the right time, but a closer look at the album proves otherwise.

Don’t get it twisted, just because Large Professor’s tag is on “Vagina Diner” does not mean that it can touch “Breaking Atoms.” Extra P intelligently decides to bring the drums to the front of each track, recognizing that Akinyele’s traditional rough flow is much more suited for a stiffer beat. The jazz loops are still there, but they are much more understated than his more vaunted work. This decision clearly detracts from the success of the music, but it also allows Ak to rule his own album. In this case, Large Professor could have easily stolen the spotlight with the same captivating grooves that drove his group’s debut. Akinyele would have been lost in the depth of the tracks, however, and these wicked drums provide a more defined path for Ak to follow.

Stylistically and thematically, Akinyele provides very little variation over the course of the LP. The disc’s brevity and a charming and relentless energy save him, however. His signature tone provides a growling emphasis on the last word of certain lines, and this distinct style appears frequently enough that it becomes expected. He is boastful almost to a fault, but since he sounds like he’s bouncing off of the walls of the studio, this cockiness is easily forgiven. Much of Ak’s rhyme content is wandering battle raps, but within the realm of the typical bragging he is quite creative. Rhymes like “So much rap lines, you might fuck around and hang clothes on it” are as abundant as they are random, and though plenty of these metaphors fail miserably, they come so quickly that each corny line quickly fades. On “Exercise,” over a faintly jazzy Large Professor track, he crafts a flawless concept song that somehow manages to stay within his comfort zone:

“Me jumpin’ over fences, don’t make sense kid
On a hot day, you’ll find me coolin’ on the benches
And you could ask me where the water’s at
But don’t come ask me to act, like no motherfuckin’ quarterback
Shoulder pads and helmet, yeah right
Talkin’ that hut one, hut two, hut three, hike – psych!
I’m POETIC, while dealin’ with the alphaBETIC
Not ATHLETIC, that’s why I don’t SWEAT IT
So you can keep your sports on hold
Fuck soccer, the shit that I kick, yo, it’s bound to go gold”

He concludes with the fitting observation that “straight up and down, nigga, I’m not a good sport.” A young Rob Swift works the turntables through the record, but as the music fades on “Exercise,” he receives a little solo time.

The only other topic that Akinyele really examines is the ladies on both “I Luh Huh” and “Bags Packed.” These songs are surprisingly tame, though, considering both the album’s title and his future catalogue. In fact, the title “Vagina Diner” and the garish cover art are completely unrelated to the actual album. His few mentions of women are on conceptual tracks that revolve around realistic relationships with particular girls. The kinky details are saved for his later work.

This record’s true historical significance belongs to Large Professor. Though rather understated, his pieces on “Vagina Diner” are beautiful, despite staying just beneath the surface of Akinyele’s bars. There are several recognizable loops that have surfaced since 1993 on various rap songs, but his use of them is far from commonplace. As a whole, the production is masterful in a way that is difficult to discern. Since heavier drums were necessary to complement Akinyele’s forceful voice, one must be attentive in order to examine his sample techniques as more than just a side note. Unfortunately, there are no truly stunning beats. Because the overwhelming majority of the production on “Breaking Atoms” oozed an ethereal funk, “Vagina Diner” sounds like a disappointment at first. Large Professor sacrifices his craft the slightest bit to allow Akinyele to dominate the album. His genius is still there, it is just cloaked underneath the noise of Akinyele’s voice and his own stern drums.

For fans of the Large Professor or Akinyele, this forgotten gem is a must. Purely as a throwback joint, as well, “Vagina Diner” is relentlessly playful and nearly childish, and it bridges the gap between old-school enlightening ideals and hard emceeing with ease. Akinyele sounds like a hardened adult, but he’s having a whole lot of fun. The lack of sexual content, especially, signals that he is truly just interested in kicking some nice little raps for the fans. As for Large Pro, you can’t really front on anything he did in the early nineties, and this is no exception. If you come across “Vagina Diner,” scoop it up, not just because it is rare, but because it’s a really dope piece of hip-hop history.