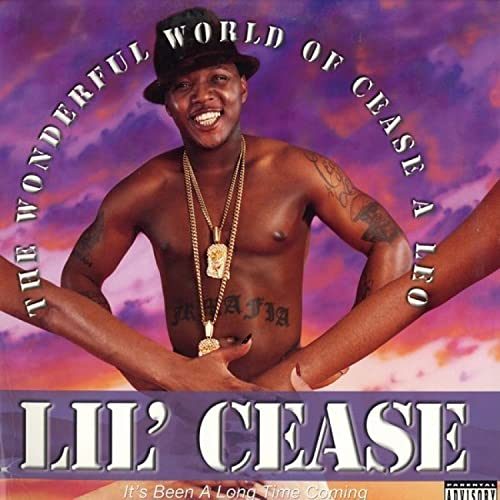 The Wonderful World of Cease A Leo

Lil’ Cease :: The Wonderful World of Cease A Leo

A few years ago Faith Evans released an album in tribute to (or cashing in on) her late husband Christopher Wallace. Unnecessary or not Evans’ CD did at least serve to remind me of the glory days of Bad Boy and Biggie’s Junior M.A.F.I.A. clique, with affiliated friends of “The King” appearing throughout — 112, Lil’ Kim, The L.O.X. and Lil Cease just to name a few. I knew what most of them had done since “the greatest rapper of all time died on March 9th” but had heard virtually nothing from Cease in two decades. I could remember an album and a couple of singles back in ’99 — that’s it.

It turns out my memory was accurate. “The Wonderful World of Cease A Leo” was James Lloyd’s one and only solo album on July 13th, 1999 via Atlantic Records. 55 seconds into the album the shadow of Notorious B.I.G. already looms large over the presentation thanks to “More Dangerous.” Busta Rhymes provides the song’s hook in his typically charismatic fashion, but the line he is quoting is from Biggie’s “Warning.” Putting Mr. Bristal and G. Dep on the track only serve to push Cease further out of the spotlight. Nashiem Myrick’s simple piano track is a banger, but had Cease flown solo on it that would have been a much stronger introduction.

This turns out to be a major problem for Cease throughout what is ostensibly a solo album. In a way it’s ironic given that Cease stole a little of Lil’ Kim’s spotlight with his verse from her second solo single “Crush On You,” but Kim’s raucous and raunchy personality still dominated the song in general and “Hardcore” in particular. While Cease’s laid back personality made him the “cool cat” amongst Bad Boys, it didn’t serve to make him the star of his own show. Ask yourself this question — when you think of a song about “Chicken Heads” do you think of Lil’ Cease featuring Carl Thomas, or do you think of a Project Pat song featuring Three 6 Mafia?

While it’s a better choice for a single than “Play Around” since Cease actually raps every verse, the uptempo track makes it hard for the laconic Cease to keep up, resulting in bars without clear diction and words that are slurred together. It’s not shocking to me that I can’t find a video to go with this one after all this time. If it exists it’s been overshadowed by a better song from Memphis with a similar name and topic, and if it doesn’t it’s because everyone involved understood investing a budget in videos for “The Wonderful World of Cease A Leo” would not result in more albums being sold. Loyalty to Biggie and his M.A.F.I.A. could convince a certain percentage of his audience to ride for Cease, but songs like “Mr. Nasty” just make me want to listen to Boogie Down Productions instead.

Scott La Rock had ’em all, but Mr. Lloyd is the super hoe, because everybody is fucking with this album. Even with over an hour of material to work with folks just can’t stop muscling into the presentation on song after song. It’s almost like nobody had the confidence to let Cease just do his own thing. At one point three straight tracks are tied to The Family — “Dolly Baby” featuring Total, “Don’t Stop” featuring Puff Daddy, and “Everything” featuring 112. If you count the “B.I.G. & Cease Forever” outro that bookends the album, that’s actually four in a row, but it’s not really a song — just a series of times that Biggie gave Cease a shoutout in a verse.

Is it any wonder that the album’s most gutter and grimy track “4 My Niggaz” features bars from Mr. Bristal, Blake C and Jay-Z? That’s right — even Shawn Carter showed up to out-rap Lil’ Cease on his own album. It’s impressive that he had so many features and yet somehow it’s sad at the same time. Every song on this album I want to listen to more than once features someone else — from “Future Sport” with Redman to “Girlfriend” with Kelly Price (yes she actually raps on it and has some flair for it too) and so on. In retrospect “The Wonderful World of Cease A Leo” just doesn’t make sense. Rather than being the launching pad for his solo career, it never even got off the pad in Cape Canaveral, and the whole mission got scrubbed. Honestly I wouldn’t have put out another album after this one either.