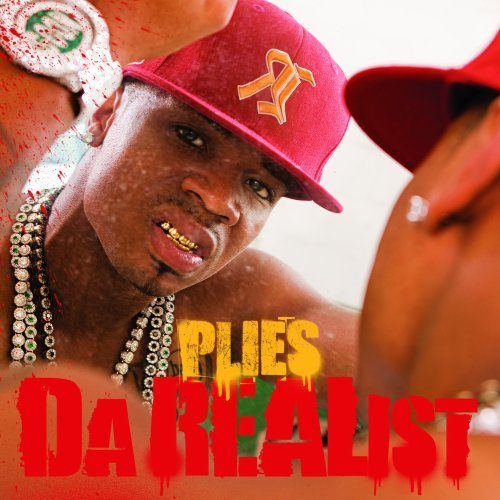 The cover of Plies new album “Da REAList” was so shiny I almost thought I could hold it up and use it as a mirror for a shave and brushing my teeth. Plies probably couldn’t do the latter though since one of the things blinging off the front artwork is his iced out grill, along with at least two or three chains around his neck and an expensive watch on his wrist that seems to have blood all over it. Maybe Plies punched a hater out right before the photo was taken. It wouldn’t be a member of the RR staff though because we’ve given Plies respect on two straight albums. I noted that “The Real Testament” was a promising start for Plies while Patrick Taylor wrote that “Definition of Real” was “not an instant classic, but not a sophomore slump either.” Seems Plies has things going in the right direction artistically, and if that wasn’t enough he appears to be trying to one-up both DMX and Kool Keith as the most prolific artist in hip-hop. Given that “Da REAList” is his third album in under two years you really have to give it to P not only for repping Florida but being one of the hardest working rappers out today. In fact if the reports are to be believed he already has a FOURTH album in the can which he could release right now that he’s holding back until April or May so he can see how well “Da REAList” sells first. Keith may drop two albums in a year and DMX may have dropped three in two, but Plies is outpacing them so quickly it’s like watching Michael Phelps swim for the gold – nobody’s gonna catch him.

“Da REAList” is not a short album either – this album is 16 tracks starting off right away wit no intro on “Me & My Goons.” For those who got used to the commercially friendly songs of the last release like “Bust it Baby Pt. 2” and “Please Excuse My Hands,” this opener is a much harsher note than they might have expected. Necronam provides Plies with a very bare bones no frills beat and P spits some harsh lyrics explaining that he’s just not the one you want to fuck with:

“I keep a couple killers ’round me when I move
Cause I don’t really fuck with a lot of these dudes
You won’t rob me but I might rob you
So when you see me you gon’ see my goons
[…]
I gotta stay focused cause these niggaz real slick
You will not rob me, turn around and sell my shit
Keep my eyes open cause it happen real quick
How many of us wit fire, hmm, about six”

Things are not any more polite on Plies second track “Fuck U Gon’ Do Bout It.” Trae Coner keeps things minimalistic, adding very little to the staggered beat other than some sirens rising and falling during the chorus. It suits Plies slow flow and Floridian drawl so well that this less-is-more approach is not a detriment whatsoever. I was actually hoping “Gotta Be” would continue to follow that formula, but Necronam decided to change it up to a more radio friendly sound that has multiple layers of melody piled on top of each other while still managing to be clean enough to eat off of. Plies lyrics display the thoughtfulness that makes him more versatile than the run of the mill gangster rapper, as he steps outside of his own world and offers a toast to everyone else’s success:

“I’m happy for that nigga today that done came home
And got that time behind ’em, now it’s time to move on
I’m celebratin wit’cha, the reason I wrote this song
Hope you done became a better person since you been gone
I salute you my nigga, dawg for stayin strong
Now get’cha feet up under ya homey, keep it goin
I hope ya walk straight, don’t make the wrong turn
Them crackers waitin to send you off on another long run
Just enjoy yourself tonight and have fun
And don’t go fuckin with them niggaz who ain’t send ya nothin
And if ya got kids, go and get ’em and catch up
I’m celebratin with ya tonight, I’m holdin my cup up”

There’s an undeniable charm to Plies, from his accent to his personality, that makes him the biggest star on the Slip-N-Slide roster since Trick Daddy left. In fact intentionally or otherwise one starts to get the impression on “Da REAList” that they’re grooming him to be the NEXT Trick Daddy, even though that’s unfair to both artists. Even though they were one time labelmates and have similar accents, TD always stood out for his deep voice and his unapologetic love for being a thug, while Plies is higher-pitched and a bit more of a romantic in his outlook and worldview. “Want It, Need It” featuring Ashanti exemplifies these differences, as J.R. Rotem provides that crossover appeal that fans of “Bust it Baby Pt. 2” were waiting for. It’s not as though Plies is going to be confused with Elizabeth Barrett Browning any time soon with lines like “When she think about me she get so wet/Everytime she want it she send me a text” but in his own crass way Plies is offering to treat a woman the way she wants to be treated. Instead of spending all his money on his own flossy lifestyle, he’s offering to spend it on her to see she has a good time and some of the finer things in life with only one request in return – “let me go deep” when they get between the sheets.

Plies runs the gamut of topics on “Da REAList” and offers some surprises for neophytes to his rhymes. Even though bragging about wealth is a pretty typical facet of today’s rap artists, “Plenty Money” suggests that he’s COMFORTABLE with his status, unlike many rappers who seem to be constantly grinding on every song to get more loot. In fact Plies is so comfortable he’s made sure to get his “Family Straight” and spend as much taking care of his mother, grandmother, brother and auntie and make sure they have everything they need. The Infamous and Laurent ‘Slick’ Cohen beat is at times reminiscent of Whodini’s “Friends,” although slowed down and chopped up a little more for Plies flow, and it’s a perfect blend with his thoughtful rap about his kin. Plies may have had enough drama in his life to “Make a Movie” (including a well-publicized nightclub shooting) but he’s convinced that God should give everyone a “2nd Chance” to make amends and do right in life. P hasn’t totally left the streets behind though, as he’s quick to remind listeners at the start of “Heard of Me” that he “don’t play no motherfuckin games” and “Pants Hang Low” has a militant march step courtesy of Mannie Fresh. The latter is totally unapologetic, with P telling his audience “I let my pants, hang low, I’m from the hood and that’s how shit go.”

The remarkable thing about Plies is that many rappers releasing so many albums in such a short span of time would run out of things to talk about. Plies on the other hand seems to have pent up his artistic ambitions for years waiting for a chance to shine, and now that it’s finally arrived he’s unleashing a tidal wave of creative output that keeps crashing on the shores of radio and Billboard over and over. “Da REAList” should be no exception, and despite the prolific amount of material having the possibility of thinning out the quality of his beats and rhymes, Plies just keeps getting better with every CD. By the time album #4 arrives he may be ready to muscle in on Lil Wayne or T.I.’s turf as the not only the hardest working rapper in the South but the most popular today.