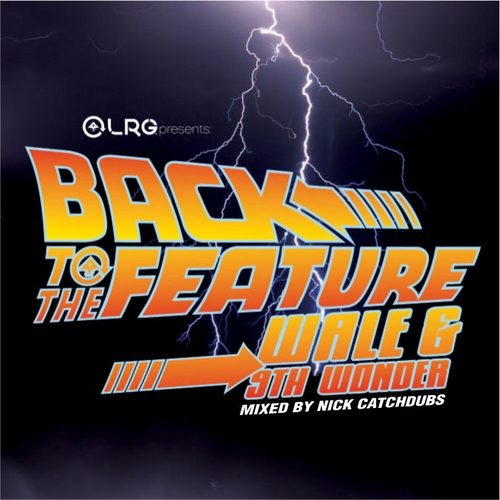 Wale & 9th Wonder :: Back to the Feature

Wale waits until the penultimate track to disclose this vital information about his new mixtape with 9th Wonder, but I suppose by that point many listeners will, like me, be thinking, “no shit!” While “100 Miles & Running” remains the most accessible work in Wale’s oeuvre and “The Mixtape About Nothing” his most laudable, “Back to the Feature” sounds a lot like most mixtapes. Too much like most mixtapes. That being said, the DMV rapper has apparently finished his debut album, “Attention: Defecit,” and has been touring internationally for the past couple months, hence the delay on the tape that was supposed to drop about a month ago (and to think of the flack Drake initially caught for being only hours late on “So Far Gone”).

Now, my worst fears when I first heard about the project were twofold:

1) 9th Wonder producing the majority of the songs would make for a lot of bland beats, as I’m part of the camp who thinks he hasn’t really done anything worth mentioning since “Murray’s Day,” and that “The Listening” was his the all-too-early pinnacle of his creativity. 2) The plan to overload the tape with features would result in too many incompetent rappers. There was no track listing and really no indication of who exactly was going to be on it, as Wale has never had many artists featured on his four previous mixtapes.

Were my worst fears confirmed? Wellâ€¦one outta two ain’t bad. I know Mr. Wonder still has a huge following, but I’ll be damned if half his beats on this tape don’t sound like they could’ve been produced by ANY guy with an understanding of FL Studio and a crate of jazz records. I’m talking specifically about “Tito Santana” and “Life’s a Bitch,” which sound far too similar to be a track apart on the playlist, and the exercise in elevator music that is “Sharp.” That’s not to say he doesn’t contribute some serviceable beats as well but Wale sounds much more comfortable on the flamboyant, sometimes go-go beats from Best Kept Secret and Judah, two of the reasons “100 Miles & Running” sounded so fresh and unique. 9th is not the only producer contributing to the tape, but the only appearance from either of the previously mentioned producers is a flip of Yael Naim’s “New Soul” by BKS at the end.

The next questionâ€”do these rappers actually come with it? And like most mixtapes and albums with this many talented people: some do, some don’t. Thankfully, though, Wale almost always does, and is rarely bested the number of people who best other rappers for a living. If you’re unfamiliar with Wale’s style, you may be taken aback as he’s as loquacious and discursive as ever, persistently toying with pronunciations and alliteration with such dedication that it’s fair to say that he’s one of only a handful of rappers whose style and substance are one in the same, rhyming “hierarchy” and “high off kis” for no better reason than that it sounds good.

Wale also loves wordplay, and with this mixtape has surpassed Joe Budden and Lil Wayne as the king of athlete references. He’s “so bomb [he] should be thrown to a Moss.” He’s “the young Ben Gordon [he] plays through all the bull shit.” He’s Wale Ovechkin, and you best believe he’s gonna mention Usain Bolt and Michael Phelps somewhere within the tape. As trite as it sounds, Wale’s flow is so quick and untiring that it’s rare you’ll catch everything he’s saying on one listen, or even a few. He doesn’t let his cleverness become all that his rapping is about.

The album’s starter, “Wordplay,” is particularly strong, with 9th Wonder’s hand drums providing a necessarily playful soundscape for Wale and Curren$y to elaborate the concept successfully. The latter delivers the first great verse of the tape, opening: “Spitta flip syllables for residuals // majors misbehavin’ I’ma have to take it digital.” He’s perhaps the most slept on among the Freshmen Ten, which needs to change. The Philly five-way cipher “Hot Shyt,” is an angry polemic against the hip hop industry, spearheaded by rappers scorned by Def Jam including Peedi Peedi and Black Thought. Wale criticizes the bloggers and forums for labeling him a hipster rapper on “The Sun,” 9th’s most soulful beat. “Pot of Gold” finds Mark Ronson doing his best Premo imitation and Wale cleverly acknowledging it (“don’t it sound so premiere?”) and, yes, referencing Josh Smith and Harry Potter. However, Wale’s greatest achievement is perhaps that he makes so many of the inferior beats worth listening to and analyzing, flexing hilarious WWII wordplay on the otherwise forgettable “Tito Santana”:

“Word pitcher, hurt niggas, young verse killa
Bitch please the skirt lifter young Dirk Diggler
Wahlberg Shoota, young flow fluid
And my brain travel like Yung Berg jewels
Transformer no opponent is formidable
Pockets morbidly obese I be tourin’ for loot
I’m Wale, the new nigga on the block
See my jeans holocaust; I got a couple knots, see
How that beat gets ate off
Acquire my scratch and I ain’t have to use a 8-ball
Hip hop’s whole face is off
And I rock with Da Band, it’s a cake walk”

Among the album’s greatest mistakes are the unwisely remixed “Cyphr,” a previously released track whose perfectly hype beat was replaced by an inert 9th beat that you’d NEVER expect Freeway or Sigel to rhyme over. It’s followed by a failed remix of Wale’s single, “Chillin,” useless considering no mixing could salvage the painfully half-assed Lady Gaga hook. The remix of Peter, Bjorn & John’s “Nothing to Worry About” sounds like a poor man’s “W.A.L.E.D.A.N.C.E.” and “Sweatin Out Weaves” sounds like UCB mixed “Single Ladies” with “Ice Cream Girl” and called it a day. When Wale tries to take it back to “100 Miles & Running,” it doesn’t quite work, hopefully because of his admittedly lower aspirations for the record as a whole.

In short, “Back to the Feature” is Wale lite, and not really a good introduction to the man’s music but rather the man’s lyricism. It will also hopefully open plenty of people’s ears to talented rappers like Curren$y, J. Cole, Big Sean and Kingpin Slim, who I’d never heard of but is easily the best thing about the aforementioned elevator music, “Sharp.” This isn’t the mixtape of the summer like “100 Miles & Running” or the mixtape of the year like “The Mixtape About Nothing,” but it’s a fully functional holdover ’til Wale’s debut.