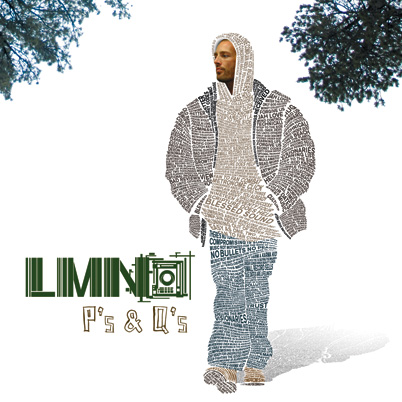 Keeping it real. The phrase has been a Hip-Hop cliché for decades, but very few people actually know what it means. Keeping it real, in its essence, simply means being true to oneself. Visionaries lyricist LMNO knows all about keeping it real, but in a very interesting context, he’s down to both keep it real and keep it positive. “I feel you can bring something that’s positive and it’ll have a more long term effect as long as it’s honest,” he explains “don’t bring that gun music if you don’t own a gun, or you only own a gun because you’re scared. If you own a gun and rap about it you’re letting everyone know and it’s going to come back to you. We for the most part get the positive response because what we talk about is positive and those who have the negative response don’t come up to us, they’re just like ‘funk that.'”

The responses LMNO has been getting to his most recent work, “P’s and Q’s,” has been, as he predicted, mostly positive. He notes that the album is a bit different from previous work, saying “I felt that I stepped out of what would be perceived as my religion versus my relationship with my religion. As some have a relationship with their gun or their money I have a relationship with the Most High, which is why you hear it so frequently on my projects. It’s what I know and what I strive to reach more of.” That relationship with God that is so prevalent in his work is what has some people applauding and some scratching their heads. According to LMNO the cause of the head scratching is that “I’m not pro church or pro religion I’m pro truth and that’s what I strive to learn more about.” Sometimes hard core religious zealots have a hard time wrapping their mind around that concept.

While the search for truth is a noble path, it’s not necessarily one that sells records. LMNO notes “obviously if I was seeking to go platinum I would look at my reaction as failed, but I can walk in the streets anywhere in the world and just have respect because I’m not out there causing anything but positive energy but with that comes with negative energy.” There’s good news about that negative energy, however, as the Visionaries MC points out “even if someone has conflict with what I say or what I’m saying and we’re cordial enough to talk about it that’s good.” LMNO continued, adding “I cause controversy even within the church. Within religion they’re not teaching us to have that personal relationship so therefore you stay religi-fied so you keep contributing financially so when you’re not on your work schedule you’re on the religion schedule.”

The controversy he was causing in the church was matched by the controversy he was causing in the streets. Bear in mind this isn’t controversy in a 50 Cent, Suge Knight, kind of way, but controversy in a more conversational kind of way. LMNO explains “it seemed like it was a battle of zealousness, like ‘how come in your raps you’re not speaking about (religion) as much?’ And on the other side I have people who are aware of God but want to hear more raps about things that are governmental, or battlish. Either you’re not doing enough or you’re doing too much. We’re in the middle with this and I’m starting the see people who are in the middle on both sides of the fence. Once I stopped denouncing both sides it was easier to be in the middle.”

The middle. Riding the fence. It can be a precarious position, but it’s one LMNO feels he’s grown into. He remembers back in the day “if you were on a soapbox I was down to knock you off by any means necessary, but now I’m able to approach it on the same level. We’re just speaking about something that’s relative to each other here and now. I get more irritated by the overzealous Christians who approach me almost like gang bangers like ‘you still down with Christ?’ It’s great to see gang bangers convert but you can’t keep the same mannerisms. During a Visionaries show we had a mosh pit during ‘If You Can’t Love.’ Not that a mosh pit is negative but certainly the women weren’t appreciating it.” He continued, expounding on the vision he has for his shows. “A funeral is positive in the extent that it brings people together but we don’t want to bring people together on a funeral level but on a wedding level, something uplifting, with substance, not just an E party.”

When it comes to “P’s and Q’s” his goals are fairly simple. “I just hope it takes me to the next level of growth,” he explains “and whoever’s rollin with me let’s go and whoever isn’t we’ll be here until it’s not time to be here. There’s a lot of wind in our sails and we got a good ship goin. We just hope the motion gets stronger and stronger.” He continued, adding “as you grow up and want to live more life the more life I want to live the less destruction I want to cause in my life, so whoever else identifies with that I definitely want to be a spokesman for them.”

Now that’s a goal that’s a lot nicer than just getting some rims that spin.