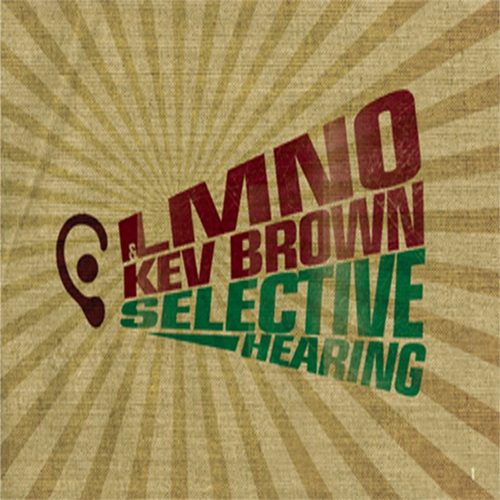 In the spirit of collaboration, I am going to split this review into two parts. The first part will be reviewed by Jesal Padania, and will cover Kev Brown’s production of the album. The second part will be written by Jay Soul, and will talk about LMNO’s rapping.

Kev Brown :: Selective Hearing :: Up Above Records
by Jesal Padania

One of my very first memories of Kev Brown wasn’t actually anything from “The Brown Album,” his Jay-Z remix joint – although I falsely attributed a wicked “Lucifer” remix to him (I still don’t know who it was by). It was actually hearing the 9th Wonder remix to one of his very first songs, “Allways” – which I immediately became obsessed by. His lament to the difficulty of relationships, over a remix that somehow improved an already wonderfully soulful beat, resonated deeply – and unfortunately I wore out my copy through repeating it too much. And never kept a back-up.

Well, back once again comes Mr Brown, this time providing the soulful soundscape to his collaboration with Long Beach rapper LMNO. A short eleven-track outing finds Kev Brown in inspired mode, at times channeling J Dilla, whilst mostly just being himself. He takes immense care and attention in his work, and every kick, snare or sample is practically perfect. Even the musical interludes between tracks are impressive enough. There honestly aren’t any highlights, since the consistency level is so impeccable.

In fact, it made me revisit that original track I loved so much, “Allways,” which (in a stroke of serendipity) happens to be on iTunes – yes, even the 9th Wonder remix! I couldn’t tell you how happy this made me. Reunited at last, it reminded me the Kev Brown is a solid rapper and a wonderful producer. His career hasn’t really taken off thus far (with regards to playing with the big boys) but it can only be a matter of time, if he keeps up a high level of productivity. He certainly has the talent.

LMNO :: Selective Hearing :: Up Above Records
by Jay Soul

Imagine, if you will, the ideal soundtrack of a hip hop fanatic. An album of beats inspired by funk and soul that was expertly crafted by an excellent (and somewhat underrated producer). Go on. Do it. Drift away…

Now imagine an irritating buzzing noise drifting in and out. A noise that not only makes little sense, but totally ruins the aforementioned beautiful soundscape. A noise that is offbeat, nonsensical and entirely at odds with everything that the music represents.

That buzzing noise is LMNO and his “rapping.” In fact, to call it that would have Biggie texting me from “Up Above” with a few choice words: “You overdid it, homes.”

I have never, in all my life, heard such a mismatch between artist and producer. Now, I freely admit to not being an expert on LMNO – he may be amazing on every other album he has delivered. However, he is shockingly bad on “Selective Hearing.” Choruses? Clunky. Lyrics? Unbearable. Flow? Clogged up.

It is almost as though someone asked a six year-old child to ghostwrite an album that was the soundtrack to a mockumentary of a terrible/deluded rapper that thinks he is saving the world. Then hired LMNO to spit those lyrics. After 17 shots of tequila. Over a bunch of amazing beats that Kev Brown would have done much better justice too.

Maybe I am being harsh. No, that was a test – you failed. I am not even close to being harsh.

So, in conclusion, we have an excellent musical album that I can thoroughly recommend, were it not ruined by some of the worst rapping I have ever heard. Kev Brown, what the fuck were you thinking? Next time, please just do it yourself. Or at least release it as an instrumental album.