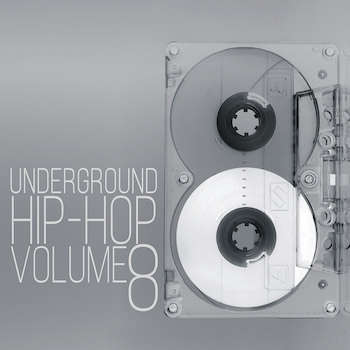 The only problem with having a D-Sisive song as the second track on an underground compilation is that you want everything else that follows it to be on his level – that’s a pretty damn high standard to set. Peppered with hilarious B-movie snippets from Ed Wood and set to a VERY familiar hip-hop loop, Derek Christoff bemoans the fact he’s got “a million YouTube views, Facebook friends, Twitter followers and Soundcloud listens” yet his “Bandcamp account ain’t ching-chinging” and he “spent four bills on the promo.” It’s also an unintentionally timely rap given that I’m listening to it right after the Super Bowl and he spits about Missy being too skinny.

Thankfully there are plenty of people on “URBNET Vol. 8” who can hang at D’s level, including another man whose nom de plume starts with the letter D – our old friend Dan-e-o.

It’s some of the less familiar artists that catch my ear though, and one who ALSO uses a very familiar sample comes to mind – that would be Lozen. Again call it coincidental timing that I’m reviewing this just after Lupe Fiasco’s “Tetsuo & Youth” finally came out, but the fact the song is called “Daydream” should already tell you that they both have a jack in common.

URBNET compilations have historically been a “best of” for both the label and for Canadian talent that doesn’t always get equal representation among the coastally centered hip-hop of the East, West and Third (Gulf) scenes of the United States. Ironically one of the best acts here is a Toronto based group consisting of MC Tragic and Rockwell called Philly Moves, and if you mistook them for a Philly rap group I doubt they’d be mad at it since they’re nice either way. Whether you’re smoking “Purple Leafs” with Mr. Brady and LMNO, or eating “Oreos” with Elaquent, you can definitely get as high as a “Satellite” with Def 3 and Ceschi over a mellow groove. Owing to the random selection of artists and songs there’s no real theme or selling point other than “it’s some good music” – but that’s enough.