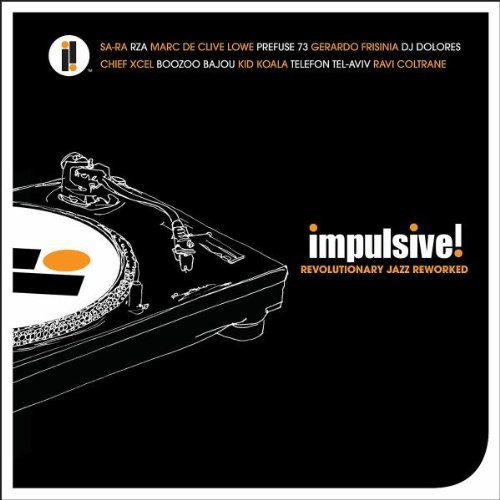 Jazz is surely a corner of the world that has not been touched too heavily by the remix, especially the hip-hop remix. Impulse Records is looking to change that, having gathered a group of likely mixmasters to mess with classic jazz tracks on their “Revolutionary Jazz Reworked” compilation. The likes of Charles Mingus and Dizzie Gillespie getting flipped by rap stalwarts such as RZA and Kid Koala is enticing, to say the least. More comforting, still, is that the generic jazz-to-rap connection seems to have been lost almost completely. In fact, I’m sure the only reason this disc ended up in my hands is that there are a couple of hip-hoppers doing their interpretations of selections from a beautiful jazz catalogue. There is not a whole lot of music here that could even get mistaken for rap music, so if you’re a strictly traditional reader of this site, don’t bother, it might be tough sledding.

The first offering is an SA-RA “Go” rendition of George Russell’s “A Helluva Town.” The trio’s contribution is a beautiful train wreck of mangled techno, complete with visceral vocal samples. It truly feels like a night on the town, despite the absence of cars whizzing by. The techno undertones speed the track forward at breakneck speed. RZA follows with a “Mingus Bounce Mix” of a Charles Mingus standard, which is scattered and occasionally brilliant. In fact, his ability to cram such a variety tempos into one song without losing continuity is rather impressive. It resides far away from RZA’s traditional material, jumping from spacey to climactic within mere seconds.

A couple of recognizable names stay within their own boundaries in fitting the music to their tastes. Prefuse 73’s remix of Gabor Szabo’s “Mizrab” is electronic enough to fit comfortably next to his solo work without losing the vibe of the compilation. Archie Shepp’s “Attica Blues” is deconstructed by Chief Xcel, and his final product is truly magnificent, tapping into the organic blaxploitation soundtrack soul that he manifests sparingly in his work as half of Blackalicious. Kid Koala’s remix of “Bamboo Flute Blues” by Yusef Lateef is a moody masterpiece as well, laced with static and sounding thoughtfully improvised.

Of eleven tracks, there are very few that don’t work on some level. Gerardo Frisina’s version of “Swing Low, Sweet Cadillac” is a little heavy on the drums, and despite possessing an insatiable rhythm, it stands out distinctly but not necessarily favorably. Boozoo Bajou catches a nice balance between the crates and some well-placed and less dated additions on his “Astral Traveling,” but the track runs longer than it should. Other than these slight missteps, all eleven tracks are worth a peek. The album’s true gem comes from DJ Dolores of Brazil. His version of “Spanish Rice” by Clark Terry & Chico O’Farrill actually seems alive, with a defined path undermined at every turn by an assortment of noises. Listening to it right now, I feel as though I can smell and taste the groove, and it is chilling and comforting.

The issue of pertinence inevitably arises when renovating such a heralded collection of music, and there are two likely reactions to those who know the music. The first is a tune of frustration akin to what I might imagine my reaction would be if someone, however qualified, decided to tinker with something like All Balls Don’t Bounce or The Sun Rises in the East. The material between the folds of this jewel case, however, is largely unique and distinctly separated from the genre that spawned it. The musicians on “Revolutionary Jazz Reworked” are unquestionably accomplished, and despite any arrogance some might assume at the mere thought of placing the word “remix” next to the words Coltrane and Gillespie, this is a first-rate piece of music. There is variation aplenty, so discrepant tastes can be served in unison. This record is bold enough to retain significance without appearing too gimmicky, and it is an abruptly deep and funky example of today’s best catching inspiration from yesterday’s best.