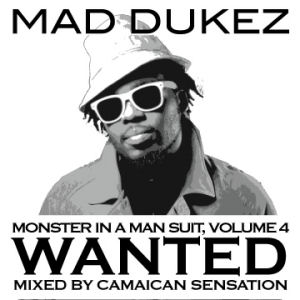 Mad Dukez has quickly established himself as a rising face of the Buffalo hip-hop scene and for the East coast in general. Before going overboard with hyperbole let’s be perfectly clear that Dukez fits into an underground niche, one which he freely admits in interviewsthat he’s happy to be a part of. Dukez could certainly use his talent and intellect to make pop radio rap tunes, but that market is saturated by mediocre rappers with major label funding. Dukez is pursuing a more artistically fulfilling path, but turning left at that fork in the road has (for now at least) left him relatively obscure. “What can I say? I guess I’m too nice.” Perhaps he is:

“They tell me I’m too nice, they learned not to trust it
They sayin I wasn’t real, cause I don’t front or nothin
And I hear ’em so annoying, with the questions I’m imploring
Curiosity’s the water; my brain the jug pouring
Should I flip the script and switch? In the end wouldn’t I be fake?
In the end be what I hate – a trend I won’t make
I spend these nights awake, just wonderin ’bout my fate
Yeah it hurts but it’s okay – lettin my laughter save the day”

If this is your first introduction to Mad Dukez, you may be a little confused as to why he dismissively says “we’ve got enough angry rappers now” on “Too Nice.” If that’s the case Dukez, why so Mad? In a slightly misguided but otherwise heartfelt soliloquy about tolerance, American Dad’s protagonist Stan Smith once opined that his political party should only “hate what’s truly worthy of hatred” instead of religion, ethnicity or sexual orientation. In the outro of “Too Nice” Mad Dukez begins to fill in those blanks in a similar way – he’s “mad” at what truly deserves his ire – those who doubt him. “Double fuck your statements, and disbelieving banter/I have hung you out to dry, new laundry’s in the hamper.”

On the last volume Mad Dukez linked up with fellow underground artist Fresh Kils, resulting in a cutting edge electronic-tinged hip-hop sound. This time his album is mixed on the American side of the border by Western New York producer Camaican Sensation, who mines mixtape style beats for “Monster” into a relatively seamless musical blend – meaning the 21 minutes passes by quickly and painlessly. That has a downside though – Fresh Kils’ aggressive production strongly punctuated Dukez thoughts while this recyling doesn’t do anything one could call “pushing the envelope.” To be sure a song called “Recess” should be bouncy and friendly, but I find myself craving the angry buzzing sound of “Started Small” instead. The most intense song of the entire EP is “Jump On This Ship,” which rebuilds a break from EPMD’s classic “Funky Piano” in a fresh new way.

Talentwise nothing drastic has changed for Mad Dukez on “Volume 4,” as he’s still a thoughtful poet who isn’t afraid to go his own way while still creating compelling hip-hop music. He doesn’t trade having a point for having a song, and he doesn’t preach positivity and shove it down your throat until you shit Bibles at the other end. Dukez is a “slice of life” rapper who stays humble even though he knows his talents, and when he says “I’ll See You” on the closer it has multiple meanings – the most obvious one being he’ll see everybody else once he makes it to the top. For Dukez that’s a difficult journey, one which can be slowed down by his choice of producer, but “Volume 4” shouldn’t hold him down. It’s not like C.S. made a bad EP – but most people suffer when compared to Fresh Kils.