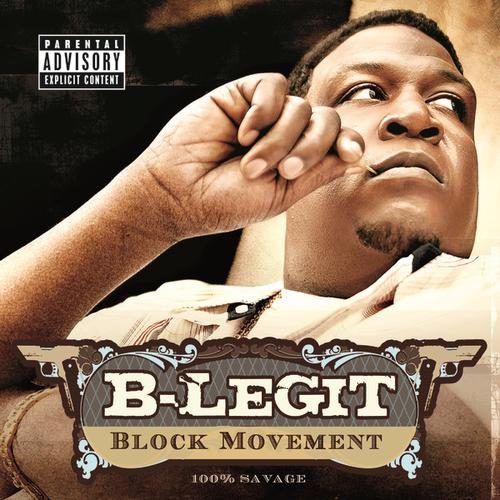 A decade into the game, B-Legit drops his seventh official release, “Block Movement.” His popularity reached it’s peak in the mid-to-late 90’s with 1996’s “Hemp Museum” and 1999’s “Hempin’ Ain’t Easy,” but he has since disappeared from the public radar. To be honest, I had no clue he’d released anything post-Y2K. It’s the same feeling I got a few weeks ago when I found out Charlie Batch was still an active quarterback. “What? Really? Haven’t heard from him since the 2000 Lions.” That’s probably not a good sign.

There’s no disputing Legit’s impact on the Bay. The juice will always been there. Need proof? Jadakiss, Styles P, Paul Wall, and E-40 all cameo on this album. But just like MJ on the Wizards, a legend’s glory eventually fades. The former “The Click” member attempts to resurrect his career with “Block Movement.” Smartly recognizing that the G-Funk heyday he once grazed on had met its maker, the new album sports a more updated sound. We know what this means: out with the funk, in with the crunk. Tracks like “Trap Game,” “Sick Wid It,” “Dem Boyz,” “Handle Up,” “Where Dem Hoes At,” and “Sewed Up” emit the woozy, thumping southern trademark. Legit fits in nicely however, and proves that his monotone flow is a match.

“Where Dem Hoes At” is the most blatant jacking, featuring a Lil’ Jon sound-alike chanting away, robotic distortion popularized most recently by Mike Jones’ smash hit “Back Then,” and reinforcements courtesy of Paul Wall. The song itself isn’t remarkable, but it is most symbolic of Legit’s new creative vision and the underlying vibe of his entire album. Unlike most artists who fail miserably at mid-career makeovers, the transformation is a relatively smooth one for Legit. It works not because he switched up his flow, but rather the new trend just happened to complement his existing delivery. Sometimes you don’t have to be good, just lucky.

Despite Legit’s ability to adapt to crunk (or its ability to adapt to him), it’s a double-edged sword. While attracting a new audience, he may be alienating true Bay Area fans. Also, the album tends to feel formulaic, as if Legit just listened to radio rap for 72 hours straight, jumped into the booth and remade everything he just heard for the album. True, he’s putting out what the people seem to want, but at the cost of sounding exactly like every other emcee on the radio. Not bad, simply clichÃ©. If that’s what he wanted, mission accomplished. Unfortunately, music buyers tend to sniff out artificial products and their “perfect fit” result doesn’t always translate to big Billboard numbers. I don’t blame Legit though, it’s worth a shot. Strike while the iron’s hot.